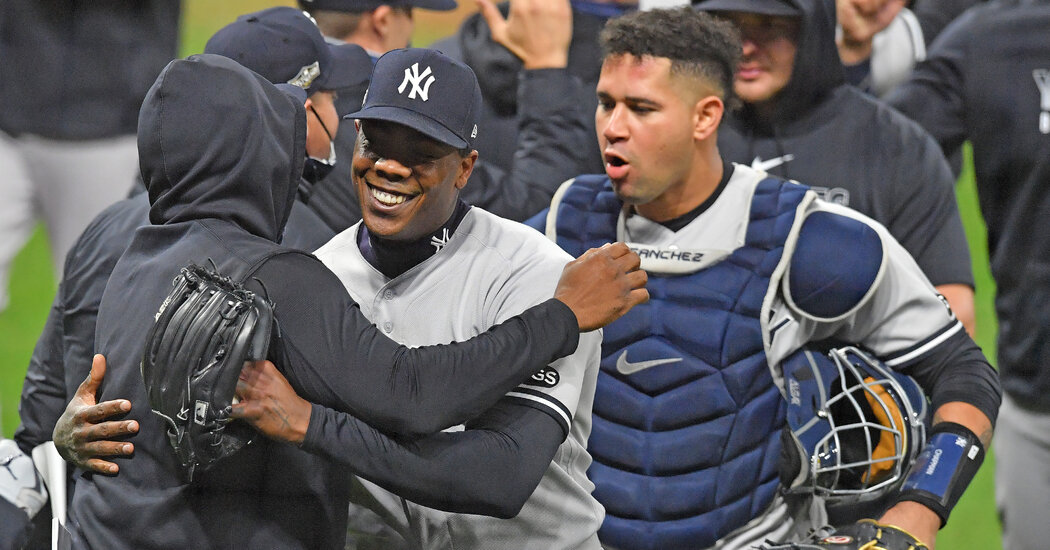 CLEVELAND — At one point in the eighth inning of the epic Game 2 of the wild-card series between the Yankees and the Indians, Yankees third baseman Gio Urshela looked back at the giant scoreboard at Progressive Field and saw that the clock was approaching 1 a.m. Thursday.

“Oh, this is a long game,” Urshela said to himself in surprise.

If not for that glimpse, Urshela would not have known that a game that was supposed to have begun at 7 p.m. Wednesday had bled into the wee hours of the next day. The game’s many twists and turns — and there were more after Urshela checked the time — had captured his attention and captivated those watching at home, presumably with white knuckles.

When closer Aroldis Chapman struck out Austin Hedges to end the game at 1:14 a.m., the fifth-seeded Yankees had not only defeated the fourth-seeded Indians, 10-9, to sweep their best-of-three wild card series and advance to an American League division series, they had also finished the longest nine-inning game — postseason or regular season — in major league history, at 4 hours 50 minutes.

The Yankees were involved in the previous record holder: They played 4 hours 45 minutes for a win over the Boston Red Sox on Aug. 18, 2006.

Extra innings were not needed to create the drama that began Wednesday: a non-rain delay, an actual rain delay, unpredictability heightened by wet and windy conditions, 38 players used, 388 pitches thrown, five lead changes, four ties, several game-changing plays, and a statement from a team that had played poorly entering the postseason.

“A lot of people, understandably so, were questioning us coming in,” Yankees Manager Aaron Boone said. “We’ve probably caught some people’s attention again. When we’re playing at our best and when we’re playing well, we can beat anybody.”

With the Yankees trailing by a run with one out in the ninth inning, catcher Gary Sanchez knotted the score with a sacrifice fly off Brad Hand, the Indians closer who entered the game without a single blown save this year. Then infielder D.J. LeMahieu, the Yankees’ best hitter, provided the winning run by chopping a run-scoring single up the middle.

That was quite the praise, considering that in his playing days Boone hit one of the most memorable home runs in baseball history: a walk-off blast in extra innings against the rival Boston Red Sox in Game 7 of the 2003 A.L. Championship Series that sent the Yankees to the World Series. The stakes were much different for Boone and the Yankees in Wednesday’s game, but the emotional roller coaster was head-spinning nonetheless.

“No matter what happened — down by four, going down later, it didn’t matter — we had the confidence we were going to win,” said Yankees designated-hitter Giancarlo Stanton, who homered for the second straight game.

That renewed conviction may help the Yankees in their next matchup, a best-of-five series against their fierce division rival, the top-seeded Tampa Bay Rays, slated to begin Monday at a neutral site, Petco Park, in San Diego. The Rays, who won the A.L. East crown this year, and the Yankees aren’t particularly fond of each other: Their rivalry has been littered with terse words, bench-clearing incidents and hit batters.

The Yankees and Indians did not need any of those fireworks; their game provided plenty. The night, though, began inauspiciously. The first pitch was delayed 43 minutes because of “incoming rain” that did not immediately materialize. But when the game started, heavy rain did arrive in the first inning, and Yankees starter Masahiro Tanaka coughed up a run.

Boone called the delays “a little bit frustrating” and “not really fair” to Tanaka, who said through an interpreter that the conditions were “extremely bad.” He added: “You get the ball from the umpire, and it’s already soaking wet. You’re not really able to throw.”

Even after the teams returned from a 33-minute rain delay in the bottom of the first, the drizzle continued for some time, and Tanaka, normally a postseason stalwart, surrendered three more runs. But the Yankees’ lineup, the best in the A.L. despite some inconsistency during the regular season, fought back against the Indians’ pitching staff, also the best in the league.

Key regular-season performers came through during the wild card series, such as LeMahieu and Urshela, who clobbered a fourth-inning go-ahead grand slam off the Indians’ James Karinchak, a young flamethrower who has emerged as an elite reliever. But so did some players in the midst of down years: outfielder Brett Gardner and shortstop Gleyber Torres drove in a combined six runs in Game 1, and Sanchez skied a go-ahead, two-run home run that sneaked over the right field wall in the sixth inning of Game 2.

“I thought it was a fly ball to right,” Sanchez said, adding later: “In the regular season, I’ve had good swings and hit the ball hard, but no home runs. And on this one, I didn’t hit it like I can, and the ball carried. That’s baseball.”

The frenzied back and forth between the Indians and Yankees in Game 2 was partly a result of the instability of the Yankees bullpen. A dominant start by ace Gerrit Cole and a scoring binge by the Yankees’ offense spared the relief corps some heavy lifting in Game 1, but a few cracks showed a day later.

When reliever Chad Green sputtered, Boone turned to Zack Britton, who started out effectively before stumbling a bit. Because of a season-long injury to Tommy Kahnle and the struggles of Adam Ottavino, Boone had few reliable options, so he called upon Jonathan Loaisiga, a talented but unproven pitcher whose performance allowed the Indians to take the lead in the eighth inning.

The Yankees, though, were rescued by their offense (particularly in the ninth inning), their defense (particularly Urshela’s run-saving double play in the eighth, during which he threw to second base while seated on the ground) and Chapman (who tossed two innings in a game for the first time since 2017).

After the final out, the Yankees’ celebration was subdued. That was in part because coronavirus protocols prohibited the traditional Champagne-and-beer revelry, but also because the Yankees knew more was ahead.

“You can’t get too excited,” Stanton said, adding later: “The ultimate goal, we’re not even close to there. Our mind-set is that we haven’t done anything yet.