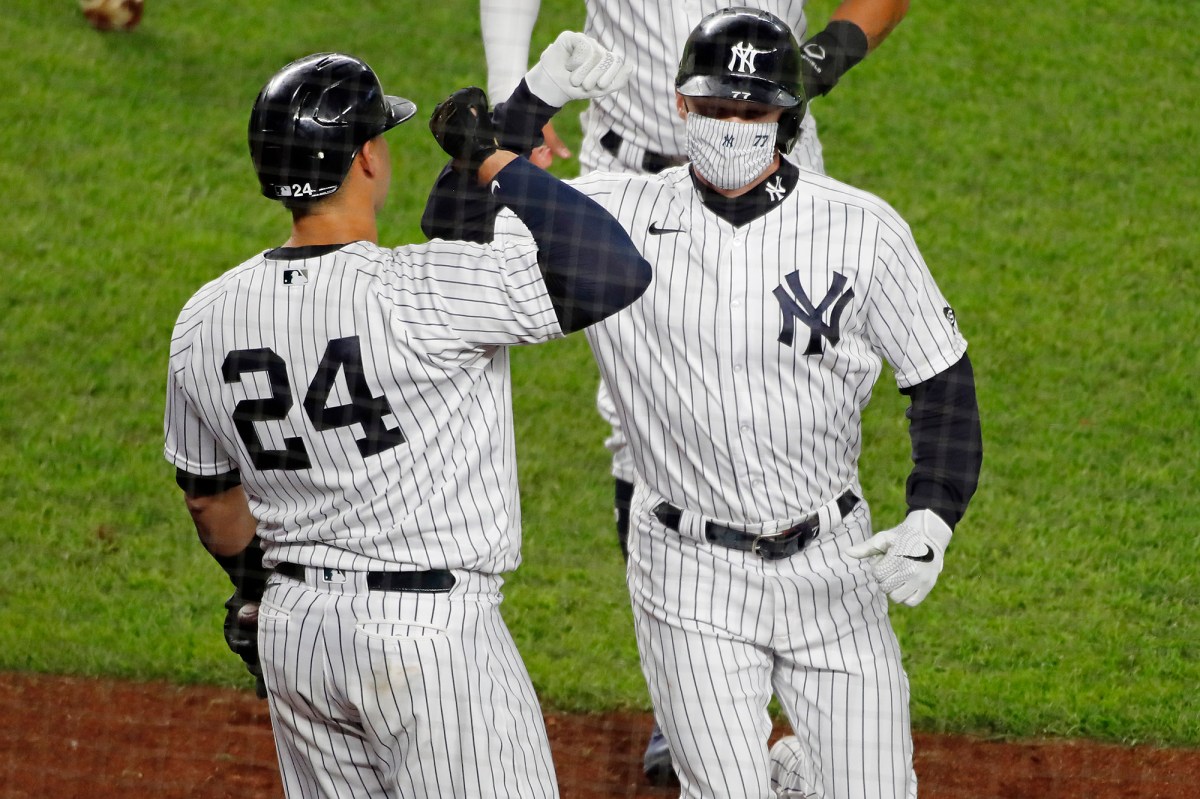 After rolling over a Blue Jays team that looked completely lost on Tuesday night, the Yankees found themselves somewhere they hadn’t been since Sept. 2: in sole possession of second place in the AL East.

Though it’s not where they expected to be at this point of the season, it looks a lot better than where they were just a week ago, when they were fighting for their playoff lives.

With their 20-6 romp over Toronto in The Bronx, the Yankees have now won six straight and moved half a game ahead of the Blue Jays, leaving them trailing just the front-running Rays in the division.

In the first of seven games remaining between the two teams, the Yankees hit six homers and scored their most runs in a game since Aug. 30, 2015, when they scored 20 against Atlanta.

They also scored seven runs in the second, five in the third and four more in the fourth — batting around each inning — to blow the game open, as Deivi Garcia won again in his fourth start.

The 21-year-old right-hander wasn’t as dominant as he was in his previous outing against the Blue Jays last Wednesday in Buffalo, when he gave up two runs in seven innings. But he was plenty good enough to beat Toronto on Tuesday.

Garcia, who threw 95 pitches in each of his previous two starts, allowed three runs — including the two homers — in seven innings. He threw 88 pitches and struck out six.

Garcia allowed a solo shot to Vladimir Guerrero Jr. in the second that put the Blue Jays up, 1-0. That score didn’t last long.

In the bottom of the inning, Gio Urshela, in his first game back from a bone spur in his right elbow, doubled to left with one out. Clint Frazier followed with a routine fly ball to right that was dropped by Derek Fisher — his first of several miscues of the night.

Urshela moved to third, but Frazier — not running — only got to first, so when Brett Gardner followed with a single off the wall in right — again misplayed by Fisher — Frazier had to stop at second.

Tyler Wade drove him in with a single to give the Yankees a 2-1 lead.

DJ LeMahieu, who had five RBIs on the night, slapped a single through the vacant right side of the infield to score Gardner and then Luke Voit slammed a three-run shot into the bleachers in left to make it 6-1. It was his first of two home runs, giving him an MLB-high 18 on the season.

Aaron Hicks then ended Taijuan Walker’s night with a homer into the second deck in right.

Walker’s replacement, Shun Yamaguchi may have been worse, as he walked the first three batters in the third and then hit the next two to force in a pair of runs before LeMahieu hit a three-run double to extend to a 12-1 lead.

Garcia gave up a second home run in the fourth, this time a two-run homer to Lourdes Gurriel Jr., but the Yankees added more runs in the fourth, highlighted by a three-run blast from Sanchez.

The final blow came from LeMahieu, who homered off infielder Santiago Espinal in the eighth, as the Yankees ended up scoring a season-high 20 runs, after the Mets beat Toronto 18-1 on Friday.