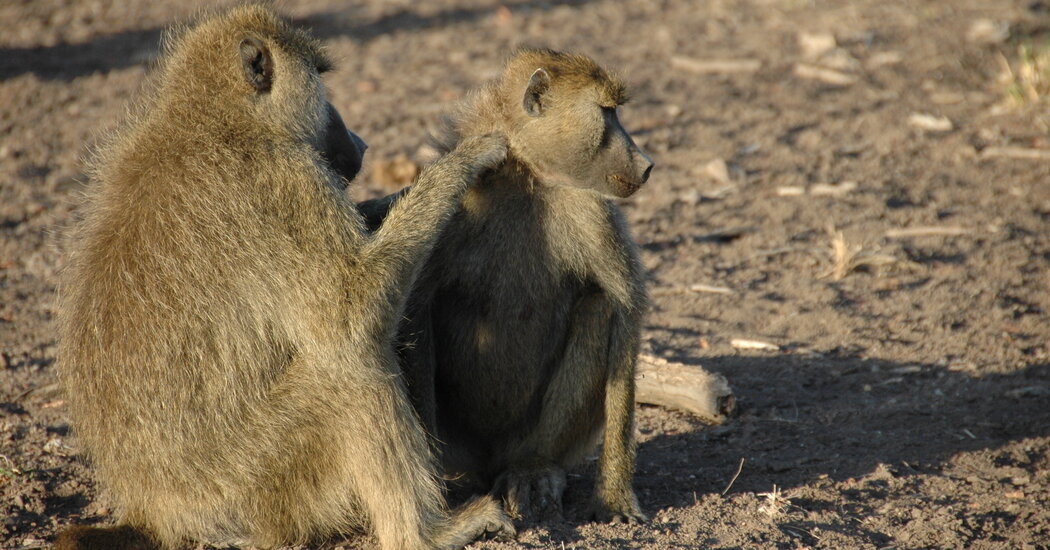 In the shadow of Mount Kilimanjaro, baboons live out their daily dramas. They tussle, they mate, they care for their young. Some are loners and others have lots of friends.

Now research has shown that those platonic relationships might be just as important as the relationships that make more baby monkeys. Male baboons live longer if they have more female friends.

The findings, published last week in Philosophical Transactions of the Royal Society B, came from one of the world’s longest-running studies of wild primates. Researchers have been continuously observing savanna baboons in Kenya’s Amboseli basin since 1971. They’ve amassed a data set that includes the births and deaths of hundreds of animals, as well as the baboons’ daily activities. One activity, grooming, is the basis for baboons’ social relationships.

“Grooming’s really interesting behavior,” in part because it isn’t always reciprocated, said Fernando Campos, a biological anthropologist at the University of Texas at San Antonio and one of the lead authors. Sometimes baboons take turns combing through each other’s fur for bugs and debris. At other times, one baboon may groom a higher-ranking baboon who doesn’t return the favor.

Although males and females may groom each other, there isn’t much male-male grooming or bonding in the Amboseli population. Pairs of female baboons, on the other hand, form “lifelong bonds,” Dr. Campos said, and earlier research has shown that female baboons with strong relationships live longer than socially isolated females.

But what about male baboons? That question has been harder to study because every few years or so, males join a new social group. If a male baboon disappears from the Amboseli study population, scientists can’t tell whether he has died or joined another group farther away. That makes it tough to know how long males live.

In the new paper, biologists and statisticians collaborated on a model that addressed that problem. Their data set included 542 adult baboons, both male and female, observed over more than three decades. Based on the occasional deaths or moves that humans actually witnessed, and the age of the male baboons when those events happened, the scientists could calculate the likelihood that any other vanished male had either died or migrated.

Just as with female baboons, they saw that males with more social bonds — those platonic grooming relationships with females — lived longer.

The same pattern has appeared in other social animals ranging from horses to dolphins. Even in humans, friendships are linked to longer life. It’s not clear why, though.

Baboons of either sex might get health benefits simply from having their parasites picked off. Friendships might also help the animals avoid conflicts. Studies in other primates have found that social relationships reduce physiological signs of stress.

Oliver Schülke, a behavioral ecologist at the University of Göttingen in Germany who wasn’t involved in the research, said it was “notoriously difficult” to study the life spans of male animals like baboons that leave the groups they’re born in. Finding a way to estimate those life spans “makes a difficult topic more tangible.”

Dr. Schülke added that it would be important to figure out why the friendship of a female — who’s not a mate, and can’t help out in fights because she’s much smaller — might help a male live longer. He also wonders whether lower-ranking males invest more in such relationships because they aren’t spending as much energy on reproduction as high-ranking males are.

Those top-dog males have a tough life. Male baboons compete fiercely for the highest position within a group, which lets them mate with many females and father lots of offspring. In the struggle for this position, males may injure and even kill each other. Dr. Campos and his co-authors found that at Amboseli, high-ranking male baboons had shorter lives.

If a male baboon loses the top position and survives, Dr. Campos said, he often stays in the group for a time, especially if he has female friends there. Researchers had speculated that this might be for the sake of protecting the ousted male’s young, Dr. Campos said. But the new study hints that sticking around might be good for the male baboon himself: “Maybe just seeking companionship provides its own benefit.”

Their Teeth Fell Out. Was It Another Covid-19 Consequence?