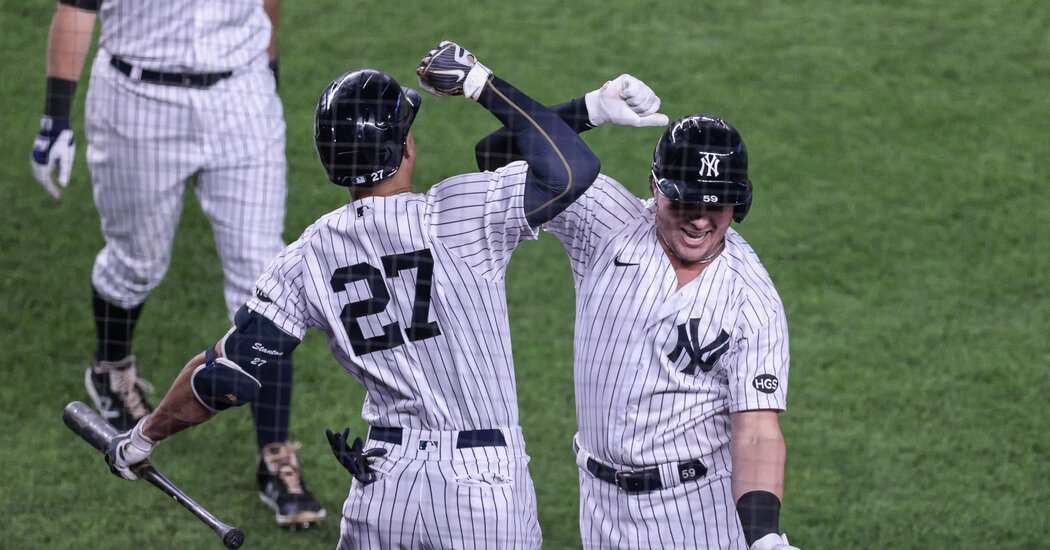 “I’ve got a new warm-up and a new midgame routine if certain things happen in the game,” Stanton said Wednesday. “Like if I’m D.H.-ing and I don’t run the bases for two at-bats, that’s an hour and a half of no movement, so I’ve got to do more in between at-bats, which is obvious and has been done, but got to switch it up.”

Even as Torres sat out on Tuesday and Wednesday to nurse what Boone called minor quadriceps discomfort, the Yankees looked little like the team that dropped two of three games to the Blue Jays in Buffalo last week. The Yankees batted around in three consecutive innings on Tuesday. Urshela went 3 of 4 and played his usual dazzling defense at third base. Struggling catcher Gary Sanchez drove in four runs, three on one home run.

“It’s been a while since we had fun like that,” Sanchez said.

LeMahieu and Voit — the two hitters who have carried the Yankees’ offense all season — each drove in five runs. Stanton was the only batter in Tuesday’s starting lineup without a hit. (He did walk once.)

“A handful of those days the offense has stepped up, but I think it has all started with the starting pitchers,” Boone said after Tuesday’s game.

Boone said the Yankees would gradually ease Stanton and Judge back into action. Because Stanton received only about a dozen at-bats at the team’s alternate site in Moosic, Pa., before his return, Boone said he planned to mix in days off for Stanton early on so that he could be ready to play several days in a row by the end of next week. That would be fortuitous for the Yankees, since the playoffs begin on Sept. 29.

As far as postseason seeding, Voit made his goal clear: He wants to play the first round of the playoffs, a best-of-three series, in the Bronx, which would require the Yankees finishing the regular season as a top-four seed. (The following two rounds would be in a neutral site bubble in Southern California.)