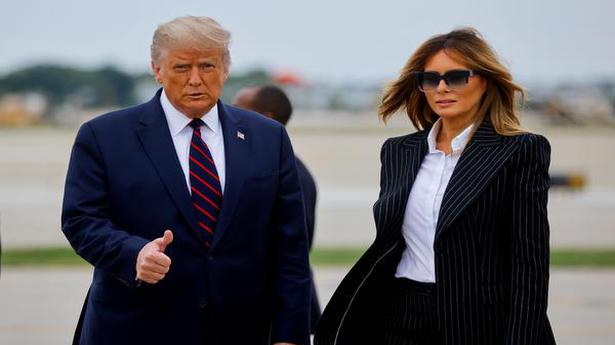 The White House physician says the President is expected to continue carrying out his duties “without disruption” while recovering.

With just over a month to go for the Presidential election, U.S. President Donald Trump and First Lady Melania Trump announced that they had tested positive for the coronavirus. The news will mean a dramatic reduction in the in-person rallies Mr. Trump can hold in October and has cast doubt on whether the President will be able to participate in the next presidential debate scheduled for October 15.

Announcing his condition, Mr. Trump tweeted: “Tonight, FLOTUS and I tested positive for COVID-19. We will begin our quarantine and recovery process immediately. We will get through this TOGETHER!”

The White House sent out a memorandum from Mr. Trump’s physician Sean Conley, after Mr. Trump’s announcement, confirming the infections and saying the Trumps will remain at home during their convalescence.

“Rest assured I expect the President to continue carrying out his duties without disruption while recovering,” Mr. Conley said.

Hours before Mr. Trump made the announcement, Bloomberg News reported that his adviser Hope Hicks had tested positive. Ms. Hicks had travelled with the President this week, including to Ohio for the first debate against Democratic nominee Joe Biden.

In addition to appearing on stage with Mr. Biden, Mr. Trump had a full schedule this week, including a flight to his golf course in Bedminster, New Jersey, for a fundraiser. He did not wear a mask at the golf course or on the plane, the Washington Post reported. Mr. Trump announced that he and Ms. Trump had begun their “quarantine process” as news of Ms. Hick’s infection broke and the Trumps awaited their test results.

Mr. Biden said he and his wife, Jill, wished the Trumps a “swift recovery”.

“Jill and I send our thoughts to President Trump and First Lady Melania Trump for a swift recovery. We will continue to pray for the health and safety of the President and his family,” Mr. Biden tweeted.

Mr. Biden’s last tweet before the news of the President’s health situation broke was about Mr. Trump distracting the country from his “failed COVID-19 response”.

Mr. Trump was supposed to hold a roundtable with supporters in Washington on Friday and later fly to Sanford, Florida, for a rally. Instead, his Friday calendar was updated to show just a previously scheduled phone call “on COVID-19 support to vulnerable seniors”.

First Lady Melania Trump also tweeted about the situation, saying “too many” Americans had tested positive and were quarantining.

“As too many Americans have done this year, POTUS & I are quarantining at home after testing positive for COVID-19. We are feeling good & I have postponed all upcoming engagements. Please be sure you are staying safe & we will all get through this together,” Ms. Trump said.

Some 208,000 Americans have died and 7.3 million Americans have been infected since the virus hit the U.S. Had social distancing guidelines been instituted a week earlier in March, the U.S. could have seen 36,000 fewer deaths and 700,000 fewer infections by May, as per a Columbia University study.

The President has been criticised for not taking the virus seriously. He told veteran investigative journalist Bob Woodward that he wanted to play down the virus so as not to create panic. In February, he said the virus would disappear “like a miracle”. His campaign rallies have been characterised by a lack of masks and little social distancing.

President Ramnath Kovind wished the Trumps a “speedy recovery” on Twitter. “Our prayers and best wishes are with you during this time,” he wrote.

Mr. Trump is not the only major world leader known to have contracted the virus. Brazil’s President Jair Bolsonaro too contracted the virus in July. British Prime Minister Boris Johnson spent a week in the hospital, including three nights in intensive care, where he was given oxygen and watched around the clock by medical workers. German Chancellor Angela Merkel self-isolated after a doctor who gave her a vaccination tested positive for the virus, and Canadian Prime Minister Justin Trudeau worked from home after his wife fell ill.

(With additional inputs from The Hindu Net Desk)