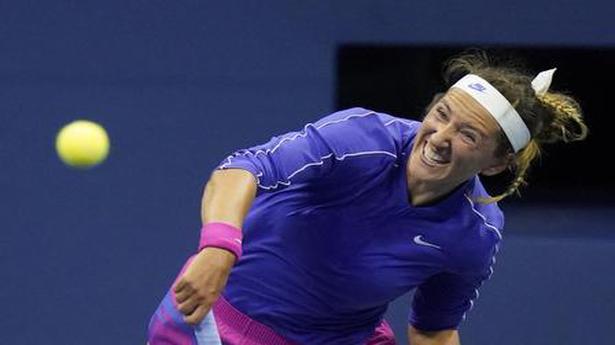 The win sets up a semi-final showdown with Serena Williams, who defeated the Belarusian’s U.S. Open finals appearances in 2012 and 2013.

A loose and confident Victoria Azarenka overpowered Elise Mertens 6-1 ,6-0 on Wednesday to advance to the semi-finals of the U.S. Open, where she’ll face a familiar foe in Serena Williams.

Azarenka, who smiled and bobbed her head along to music being played during changeovers on Arthur Ashe Stadium court, fired 21 winners to dominate the 16th seeded Belgian in their first career meeting in a singles match.

Also read: Explained: Why Novak Djokovic was disqualified from the U.S. Open

Azarenka took the first set after the normally rock solid Belgian sent a forehand wide for her 13th unforced error of the set.

The 31-year-old Azarenka didn’t let her foot off the gas in the second, running Mertens around the court and sealing the win when Mertens dumped a backhand into the net on match point.

With the win the two time Grand Slam champion Azarenka has advanced past the quarterfinals at a Grand Slam for the first time since 2013.

The win sets up a semi-final showdown with Serena Williams, who defeated the Belarusian’s U.S. Open finals appearances in 2012 and 2013.

Williams, a 23-time Grand Slam winner, holds an 18-4 lead in their head-to-head matchups.