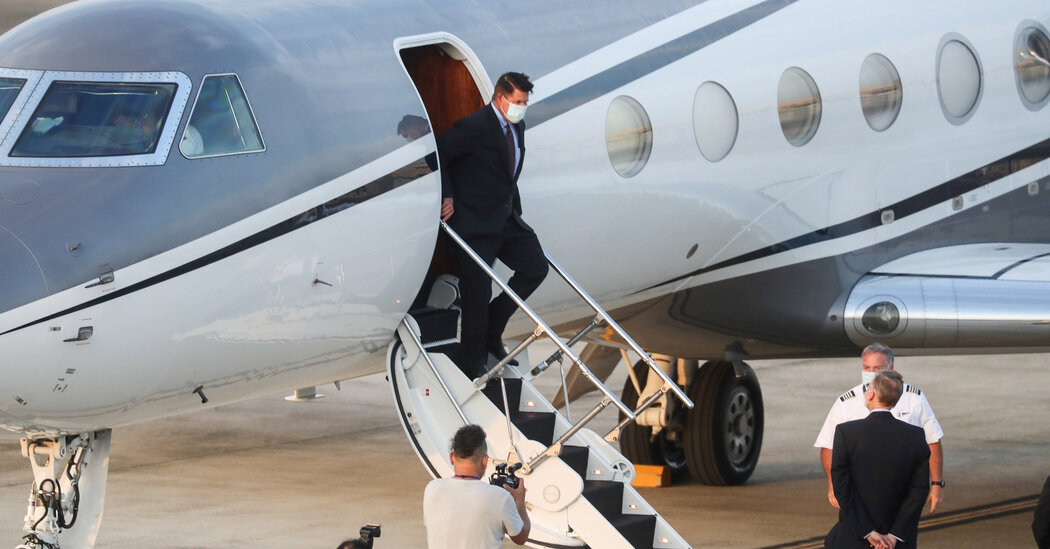 TAIPEI, Taiwan — A senior U.S. envoy arrived in Taiwan on Thursday to attend a memorial service for former President Lee Teng-hui, in the Trump administration’s latest move to bolster its support of the island in defiance of threats from Beijing.

The Taiwanese foreign ministry said that the envoy, Keith Krach, under secretary for economic growth, energy and the environment, was the highest-level official from the State Department to visit the island in decades.

China, which claims self-governed Taiwan as its territory and opposes formal exchanges of any kind, responded to the news of Mr. Krach’s visit on Wednesday by sending two anti-submarine aircraft into the island’s air defense identification zone, according to the Taiwanese defense ministry. The planes were warned off by the Taiwanese air force, the ministry said.

Mr. Krach’s visit reflects a growing effort by the Trump administration to counter China’s attempts in recent years to isolate Taiwan on the global stage. The trip, which began on Thursday and ends on Saturday, comes just one month after Alex M. Azar II, the secretary of health and human services, became the highest-level U.S. cabinet member to visit Taiwan since 1979.

The State Department said that the focus of Mr. Krach’s visit was the memorial service for Mr. Lee, who led Taiwan from dictatorship to democracy, though the Taiwanese government said that the American envoy would also discuss economic issues. Mr. Krach will meet with President Tsai Ing-wen on Friday.

For Taiwan, the trip is an opportunity to demonstrate stronger ties with Washington as relations with Beijing become increasingly tense. China has recently stepped up military activities in the narrow strait that separates the mainland from the island and has also become more bellicose in its rhetoric.

Tsai Shih-ying, a legislator from the governing Democratic Progressive Party of Taiwan who is on the foreign affairs and national defense committee, said, “Right now, the focus is to let China know that Taiwan will not bow to the threat of force.”

“The second priority is to let China know that not only will Taiwan not bow, it has many powerful allies that will not let China just act blindly without thinking,” he added.

Last month, the United States announced that it was establishing a new economic dialogue with Taiwan focused on technology, health care, energy and other sectors. Taiwan hopes talks will result in a free-trade agreement with the United States.

The Trump administration has also stepped up military support for Taiwan in recent years through increased arms sales. On Wednesday, Reuters reported that the U.S. government planned to sell as many as seven major weapon systems, including mines, cruise missiles and drones, to Taiwan. The island’s defense ministry called the report a “media assumption.”

China has reacted angrily. On Thursday, a Chinese Foreign Ministry official in Beijing said that Mr. Krach’s visit undermined relations between Beijing and Washington and warned that China would respond “as necessary.” In an editorial about the report of the new arms sale, Global Times, a nationalist tabloid owned by the Chinese Communist Party, said, “Once the People’s Liberation Army dispatches troops to reunify the island of Taiwan, the military equipment from the U.S. will be nothing but decorations.”

Since the beginning of the year, China has stepped up its military activities around the island. Chinese fighter jets have crossed the median line in the Taiwan Strait and flown into the island’s air defense identification zone with increasing frequency. The Chinese military has also recently conducted a spate of anti-ship ballistic missile tests, which experts said were intended as an explicit warning to the United States.

Hawkish voices have emerged in China’s state-run news media urging Beijing to adopt a more confrontational approach toward the United States over Taiwan.

“At a time when our bottom line is being tested again and again, can we escalate in a crisis?” Jin Yinan, an influential Chinese military strategist, told the Communist Party-controlled China National Radio last week. “If we can’t escalate in a crisis, we’re left with nothing else but oral protests, and then we’ll lose control over a Taiwan Strait crisis.”

“We must possess the ability to defend peace and escalate in crisis, and only then can we compel the opponent not to dare take desperate risks,” he added.

The United States, too, has also increased the transit of American warships through the Taiwan Strait. But Washington has so far stopped short of saying clearly that it would defend the island if the People’s Liberation Army staged an invasion or a blockade, despite pressure from some administration officials to do so.

The risk of an accidental military clash is growing, but both Beijing and Washington still appear to want to avoid direct conflict, said Shi Yinhong, a professor of international relations at Renmin University in Beijing.

“China is quite angry, but up until now, I think you could say this visit is only a continuation and a little escalation of what the Trump administration has done on Taiwan,” Professor Shi said. “China does not feel like it is required to make any major escalation.”

Analysts say the aim of China’s increased military activities in the region is partly to test Taiwan and to wear down its personnel and equipment. They say the drills are also intended to underscore the significance of Taiwan to Beijing, which has called the island the most important issue in its relations with the United States.

“China is signaling that ‘We’re not going to let up when it comes to our goal of eventual unification,’” said Michael Mazza, a visiting fellow at the Washington-based American Enterprise Institute who specializes in Asian security issues. “They’re saying, ‘We’re here, we’re not going anywhere, and we’re not going to change the way we behave toward Taiwan.’”

To some of Ms. Tsai’s critics, however, her administration’s moves to bind itself more closely to the United States are leaving the island with less space to act autonomously.

“Taiwan has become completely dependent on the United States,” said Chao Chun-shan, an honorary professor at Tamkang University’s Institute of China Studies in the island’s capital, Taipei, and a member of the opposition Kuomintang.

“Many people are saying that Taiwan has become the meat on others’ chopping blocks,” he added.