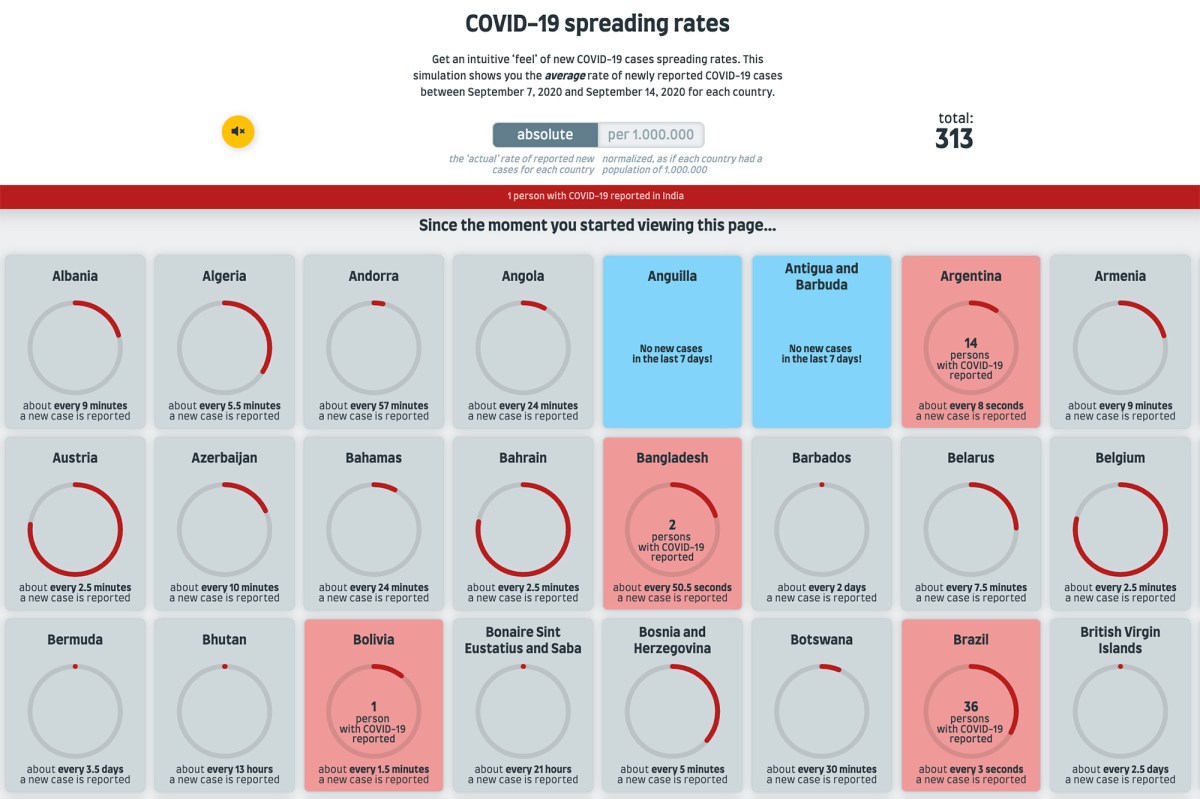 By the time this sentence reaches its period — about five seconds — at least two Americans will have been diagnosed with the coronavirus. In just over one minute, that number jumps to 25 on average, according to a new global data resource website COVIDSpreadingRates.org.

In one day, that’s some 36,000 new, confirmed cases of the coronavirus in the US alone — notwithstanding the estimated 4 out of every 5 cases that go undetected and unreported, according to previous research. At a mortality rate of approximately 3%, according to Johns Hopkins medical researchers, about 1,000 of those patients will not survive the disease.

Powered with data collected by researchers in the UK, the new interactive graphic posted on COVIDSpreadingRates.org displays country-by-country case rates, depicted as a moving dial, increasing at every interval. Each time you refresh the page, the global ticker starts over. (Warning: If you have the sound on — the accompanying bell-tone is alarming.)

“I hope people become more aware of how fast the virus is spreading, especially in some countries,” said data experience designer Jan Willem Tulp, who created the website. He hopes the “tangible” infographic, he told Fast Company, will prompt “a sense of urgency and responsibility” in people.

These aren’t case rates in real time. Data analysts pulled case counts from each country during the week of Sept. 7, then averaged the total in a 24-hour period to give a sense of about how many infections occur per hour, minute or second, depending on the country. In Barbados, for example, where a new case appears about once every two days, the dial moves imperceptibly.

But here in the US, viewers can barely keep up with the constant rate. Even Tulp called the visual study “an eye-opener.”

“There are already many COVID visualizations out there. But many of them are dashboards, maps, or common charts,” he said. “What I think was missing was getting an intuitive sense for these numbers. What does it mean if there are 600 new cases reported?”

The website also allows visitors to toggle to view new cases in proportion to population size, rather than the country’s overall count — as a way of leveling the field. In this case, small countries which appear to have low numbers overall may be spreading COVID-19 throughout their population more quickly than nations with a much larger population. For example, the “absolute” [overall] rate in the Cayman Islands, with just under 65,000 residents, boasts a seemingly manageable one new case every 2.5 days. But per 1,000,000, the rate jumps to one person every 3.5 hours.

By the end of this story — a read of around less than two minutes — the US can count some 40-50 new coronavirus patients.

Why rich people are more likely to socially distance