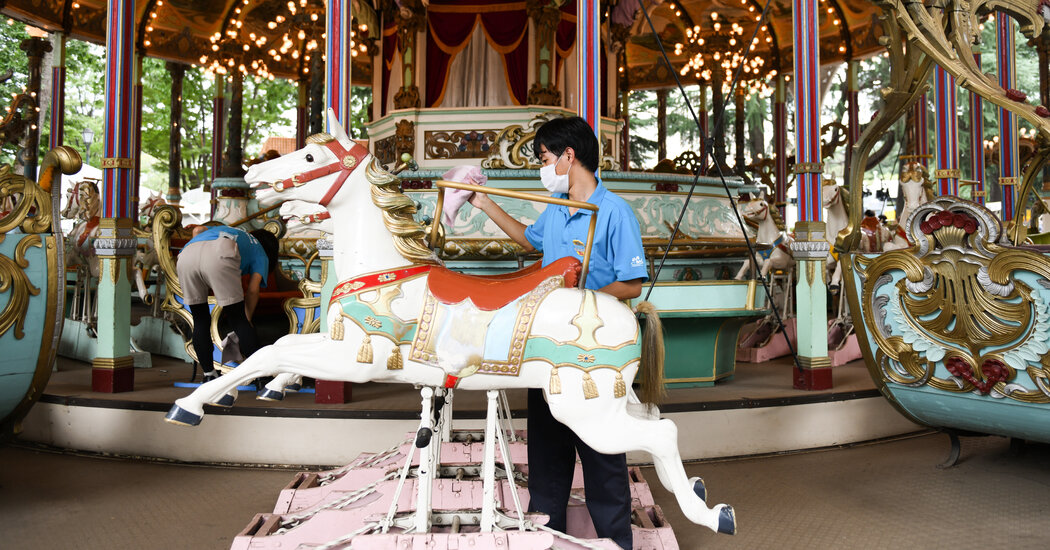 TOKYO — From the shrines of Nikko and the temples of Kyoto to the castles of Matsumoto and Himeji, the Japanese are fiercely proud of the country’s centuries-old monuments of cultural heritage.

Not so for a 113-year-old carousel in the nation’s capital. Despite a celebrated history that includes roots in Germany, a visit by Theodore Roosevelt, a stint in Coney Island in Brooklyn, and nearly half a century entertaining visitors to the Toshimaen Amusement Park in Tokyo, the El Dorado now sits in storage, its fate unknown.

The merry-go-round, and the faded time capsule of a park that housed it, are making way for a Harry Potter theme park — a familiar tale in a very old country that tends to discard the merely somewhat old for the new.

With the carousel’s last whirls came a final flicker of nostalgia, as hundreds rushed to ride its hand-carved horses and ornate wood chariots before the park shut down in late August.

Four days before the closing, Keiko Aizawa, 42, stood in line in the wilting heat with her 2-year-old son. “It is one of the most cherished memories from when I was young,” Ms. Aizawa said. “We would always come in the summer.”

Yet those visits ended some 30 years ago. It was only the news that the Art Nouveau carousel would be carted away that had her feeling sentimental. “I really want them to find a place for it,” she said.

Nostalgia, though, is fleeting. Historic preservationists fear that the Japanese public will not rally to save the merry-go-round, as groups in the United States and Europe have done for other carousels and amusement park rides.

After World War II, the Japanese government passed a law under which structures built after the 17th century could be designated as cultural heritage properties. “Prior to that, people thought ‘Oh, it’s too new; it’s not an important cultural property,’” said Michiru Kanade, an architectural historian and conservationist who lectures at the Tokyo University of the Arts.

But even now, she said, public understanding of how to mount historic preservation campaigns “is something that is not so widely known.”

Japan’s view of what makes a cultural treasure may in part be a function of necessity. After the air raids that flattened many cities during World War II, continuous urban renewal has become a feature of the country. And with the ever-present threat of earthquakes, structures are often razed and rebuilt to upgrade safety standards.

More fundamentally, the mountainous island country has only so much space for its 126 million inhabitants. “People say the land is so precious that we can’t keep old buildings the way they are,” said Natsuko Akagawa, a senior lecturer in the humanities at the University of Queensland in Australia who specializes in cultural heritage and museum studies.

But if the carousel is “going to deteriorate in a storeroom,” she said, “that’s the saddest ending.”

Patrick Wentzel, president of the National Carousel Association, an American conservation group, said the El Dorado was probably one of just a dozen such set pieces in the world. Leaving a jewel like it locked up and out of use poses risks of its own, he said.

Even if the El Dorado is not yet regarded as old enough to warrant a historic designation in Japan, he added, “this will be 500 years old in 400 years.”

For now, the Seibu Railway Company, the owner of the land where the carousel stood, has not said where it is stored or whether it will reopen in a new spot. At a closing ceremony for the park, the head of Toshimaen, Tatsuya Yoda, proclaimed that the El Dorado would “continue shining forever,” but it was not clear whether he meant merely in memory or in another location.

The El Dorado took a circuitous route to Tokyo. Designed in 1907 by Hugo Haase, a German mechanical engineer, it could seat 154 riders and featured 4,200 mirrored pieces and paintings of goddesses and Cupids on the underside of the canopy.

After Emperor Wilhelm II invited Roosevelt to Germany to see the carousel in 1910, Mr. Haase proposed that it be moved to the United States. A year later, the owners of the Steeplechase Amusement Park in Coney Island imported the carousel to Brooklyn.

Local lore has it that visitors including Al Capone and Marilyn Monroe rode the El Dorado before the Steeplechase Park closed in 1964 and the merry-go-round was moved to storage for the first time. One of three stone lions that had pulled a chariot on top of a pavilion that housed the carousel is displayed in the Brooklyn Museum.

The owners of Toshimaen, which featured Japan’s first lazy river pool and several other German-made rides, heard of the El Dorado and bid on it, sight unseen. The disassembled carousel traveled by sea to Tokyo in 1969, where the parts arrived in serious disrepair, layers of garish paint peeling from the wooden horses and pigs. Refurbishment took two years.

More than 20 years later, when Japan’s go-go property-based bubble burst, people thrown out of work could no longer afford visits to an amusement park, and Toshimaen’s visitorship plunged. Then, as the economy slowly recovered, other amusement parks like Disneyland Tokyo, Hello Kitty World and Universal Studios Japan opened, siphoning off Toshimaen’s customers.

The park did little to update its attractions: When it closed, a ride of spinning cars still featured likenesses of Tina Turner circa “Private Dancer” and Prince of “Purple Rain.”

In the days before Toshimaen’s demise, some standing in line for a last go-round on the carousel said they were looking forward to the park’s replacement.

“It is sad that it is going away, because of the memories,” Suzu Homi, 37, said as she and her 4-year-old twin sons waited their turn. “But when it becomes a new Harry Potter park, people who have not come here before may visit. People who come to Toshimaen are just coming out of nostalgia.”

For others, though, the carousel was dearer to their hearts. Late last month, Hiroshi Uchida, a 40-year veteran of the park and a connoisseur of the carousel, spoke to a group of nearly 100 visitors at a small museum chronicling its history.

Mr. Uchida’s fervent hope, he said, was to see the carousel — which he estimated had been ridden by 56 million people over its years in Tokyo — operate again in a fourth location.

“I think there is a lot of discussion about where to put it,” said Mr. Uchida, who worked as an engineer at the park and was so passionate about the El Dorado that he married a park colleague in front of it. “It could be three or four years before it opens again.”

As he spoke, a woman filming his talk on her cellphone wiped away tears. On a wall in the museum, hundreds of visitors had stuck brightly colored Post-it notes with wistful messages. “I cried while taking a spin around the El Dorado one last time. Thank you,” read one.

In an interview after his talk, Mr. Uchida said that perhaps Seibu, the park’s owner, could re-erect the carousel behind one of its hotels. Or maybe another park, or even a village, could accommodate it, as he had seen other carousels in town centers in Europe.

Ultimately, he said, he hoped the carousel could stay in Tokyo.

“If the El Dorado has a spirit, I think it would feel very unsettling to move again,” Mr. Uchida said. “It thought it had a permanent home in Germany and then it got moved to New York. And then Japan. Now it has been here for 50 years.”