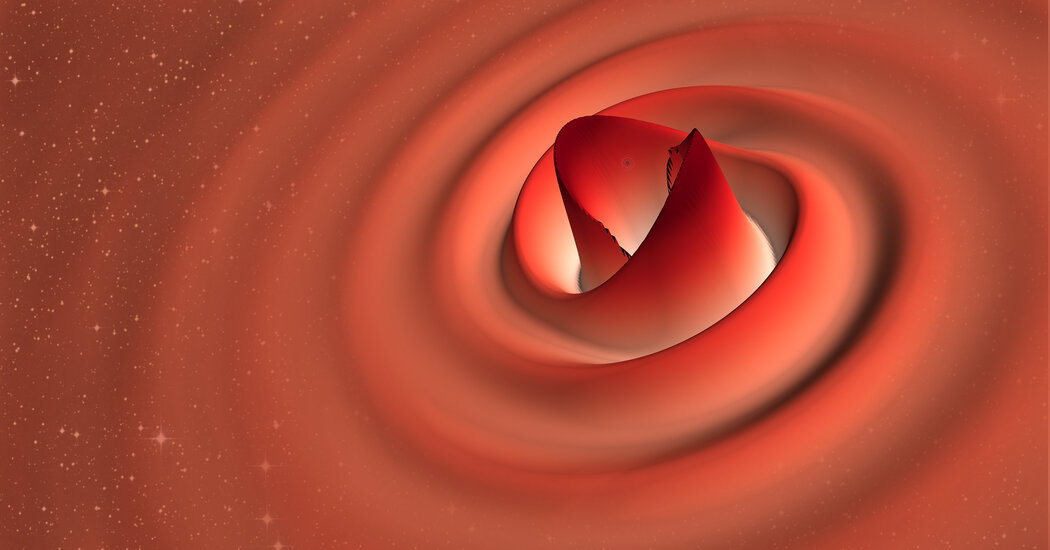 “This is the first and only firm/secure mass measurement of an intermediate mass black hole at the time of its birth,” Vicky Kalogera, an astrophysicist at Northwestern University, wrote in an email. “Now we know reliably at least one way” these objects can form, “through the merger of other black holes.”

This merger process could be an important clue to the origin of the heavier of the two black holes that collided in June. That black hole had a mass of 85 suns, and it should not have existed, according to standard astrophysical logic. Black holes with masses between about 50 and 120 suns cannot be formed, at least from a dying star, so the story and the calculations go.

In stars massive enough to make such a beastly hole, the interior grows so hot when collapsing that light spontaneously creates pairs of electrons and positrons. This makes the star even hotter, which produces more particles, in a runaway reaction that results in a particularly violent explosion called a pair-instability supernova. Such a conflagration leaves nothing behind.

He mentioned the black hole in GW190521 with 85 solar masses: “The bigger black hole is right smack in the middle of the region where black holes don’t belong. Nature seems to have ignored all of our careful theoretical calculations arguing that black holes of this mass don’t exist.”

He added: “A discovery like this is simultaneously disheartening and exhilarating. On the one hand, one of our cherished beliefs has been proven wrong. On the other hand, here’s something new and unexpected, and now the race is on to try to figure out what is going on.”

An engaging possibility, Dr. Holz and others say, is that the too-heavy hole was made of two smaller black holes that had collided and merged. In that case, the merger seen in June would have been a second- or even third-generation event, one in a hierarchical series of black hole mergers that eventually results in supermassive black holes.

Some astrophysicists think that such mergers are most likely to occur near the centers of galaxies, where supermassive black holes create swirling mosh pits of gas and other objects, and in which thousands of smaller black holes might congregate and breed. That is what Dr. Graham’s team had suggested.

Need a Hypothesis? This A.I. Has One