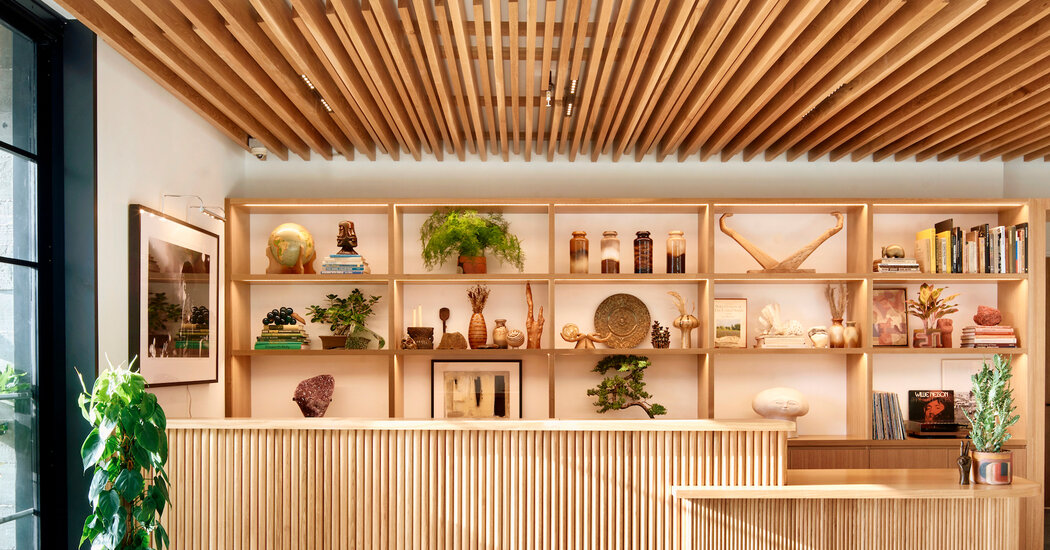 Welcome to the T List, a newsletter from the editors of T Magazine. Each week, we’re sharing things we’re eating, wearing, listening to or coveting now. Sign up here to find us in your inbox every Wednesday. You can always reach us at tlist@nytimes.com.

Though the Bunkhouse hospitality group already has three hotels near Austin’s new Music Lane complex, in the South Congress neighborhood, they’re often booked up. Their newest property, Hotel Magdalena, which opens this month, should help alleviate that problem, especially once people start traveling again. Built from the ground up and in partnership with the San Antonio-based firm Lake Flato, the Magdalena is the largest Bunkhouse property yet — with 89 rooms in total, each decorated with a 1970s sensibility and colorful Spanish tiles. The architects prefabricated timber panels off-site that were then constructed to make four distinct, treehouse-like buildings connected by various walkways and courtyards. In the center sits a swimming pool inspired by Texan lakeside culture; the hotel’s restaurant will feature an open-fire grill and rotisserie headed by Jeffrey Hundelt, the former culinary director for Austin’s Launderette and Fresa’s Chicken al Carbon. Adding to its local charm, the 14-acre plot was originally home to the Terrace Motor Hotel, which was purchased in the late ’70s by Willie Nelson, who converted part of it to the Austin Opry House. In a similar way, says Bunkhouse’s chief executive officer, Amar Lalvani, the Magdalena represents “inspired design, connection to the place and the value of community, culture and music.” Rooms start at $275 per night, 1101 Music Lane, Austin, Texas, hotelmagdalena.com.

Notoriously clumpy and quick to dry out, clean mascaras can often be a disappointing purchase. Luckily, a slew of new options are available for those wanting to avoid ingredients commonly used in mascara — such as parabens, silicones or mineral oil — but unwilling to sacrifice feathery, voluminous lashes. Named for its ability to be caked onto lashes without shedding, Róen’s Cake Mascara is infused with olive oil so that lashes stay moisturized throughout the day. Mascara 101 from Saie is ideal for a natural, daytime option and has a silky texture that conditions lashes without flaking, thanks to shea butter and beeswax. If drama is what you’re after, the makeup artist Gucci Westman’s Eye Love You Mascara coats lashes in a deep black formula while the oversized and densely-packed brush curls, volumizes and separates eyelashes. Created after the brand’s founder Sheena Yaitanes experienced lash loss while pregnant, Kosas’ The Big Clean Volumizing + Lash Care Mascara contains provitamin B5 and castor oil, ingredients normally used in hair care that strengthen and support natural hair growth.

Throughout his career, the artist and photographer Nick Waplington has shown an uncanny knack for being in the right place at the right time — whether that’s meant living next door to Graeme Park, a pioneering D.J. of the U.K.’s early rave scene, or having a chance encounter with Alexander McQueen that led to Waplington documenting the designer’s final collection. “Either I’ve been lucky or I’ve had a kind of sixth sense for whatever’s going on,” Waplington said from his London studio, just a few days before the release of “Anaglypta 1980-2020,” a visual diary spanning countries and decades. The book opens with black-and-white images showing how a young Waplington passed days and nights with friends — marching against Thatcher’s government or attending post-punk shows. By around 1985, he was living part time in America and, having been influenced by the critic and curator Sally Eauclaire, had shifted to larger format color photography. Waplington’s pictures — 520 selected from thousands — are at once careful and spontaneous, evidence of the commonplace moments of calamitous eras. Glimpse neighbors romping in a secluded, sun-dappled bend of the River Lea in Hackney or the interiors of long-gone underground nightclubs, as well as notable selections from his landmark show, “Living Room” (1991), which was shot at a public-housing complex in Nottingham. Available for pre-order for $59, jesusblue.co.uk.

This week, the husband-and-wife duo Junghyun and Ellia Park, who run the upscale Korean restaurant Atomix and the more casual Atoboy in New York City, are launching an online marketplace in collaboration with Choeunsook, the revered art and design gallery in Seoul that represents several of the country’s top artisans and has never before sold items internationally. Working with the ceramist Eunyoung Kwon, the glassware artist Jeongwon Lee and Soungchuel Park, who repurposes metal and other recycled materials, the restaurant is offering a small selection of handmade, limited-edition pieces. I’m particularly drawn to Park’s brass containers — inspired by dosirak, the Korean version of a bento box, and fashioned from old plates — as well as his wood-and-brass speaker, a rudimentary, non-powered audio device that has a slot at its base where you can slip in a smartphone to amplify its sound. atomixchoeunsook.online.

The month of September heralds the final days of summer, where the sun lingers and the heat — at least for those of us in New York City — isn’t too overwhelming. With the change of the seasons comes the inevitable sartorial shift, as we begin to phase out our summer looks (light, carefree) for autumnal ones (layers and more layers). Consider trying out a new pair of sunglasses while you’re at it. Shield styles — that is, sunglasses with one continuous lens or a strong visor-like structure — are the latest trend to take hold. My favorite are a pair from Fenty, whose denim inserts complement the bold frame. For a more subdued option, you could try Mykita’s four-lensed style for Helmut Lang, made with a lightweight stainless-steel frame. If you prefer an oversize look, Loewe has you covered with a visor bar that extends up past the temple, while Dior and Balenciaga offer similar options that take a more minimal but equally stylish approach.