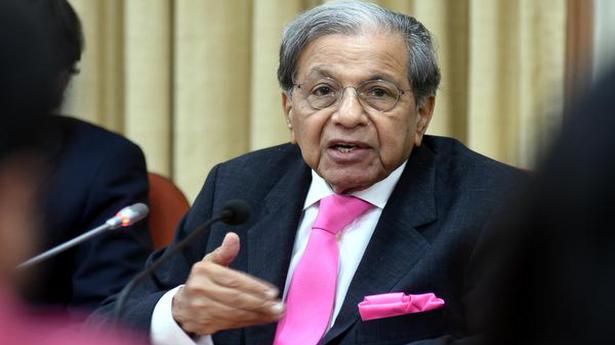 Unlike in the past, we may not have the luxury of assuming constant rates of growth throughout the period 2021-22 to 2025-26, says Chairman of the FFC N.K. Singh

The Fifteenth Finance Commission (FFC) will submit its report containing recommendations on the sharing of tax revenues between the Centre and States for the period 2021-22 to 2025-26 to the President on October 31. Chairman N. K. Singh spoke with Puja Mehra about the challenges the COVID-19 crisis has posed for the FFC. Edited Excerpts.

The FFC was supposed to submit its final report last year but didn’t because it was a year of unusual revenue trends. 2020 is even more unusual.

Yes, 2020-21 is undoubtedly an unusual year with attended uncertainties and unpredictabilities. Whatever award the FFC had to give for 2020-21 that was already in the report submitted to the President for 2020-21. It was accepted by the government. Also placed in Parliament with Action Taken Report on recommendations. Therefore, 2020-21 doesn’t matter from the point of view of the award. But it is relevant because we need to make projections.

Although everyone tells me to treat it as a non-year, and that for the base we should go back to 2019-20, I don’t think that is possible. The FFC is of the view that we cannot evade making predictions. In the Economic Advisory Council (EAC) of the FFC, there are differences of opinion among domain experts on the decline in both the nominal and the real GDP growth. We will look at what will be a realistic and appropriate number. Their rebound estimates also vary … for example… the Chief Economic Advisor [Dr. Krishnamurthy Subramanian] believes that the rebound might be in the region of +19%. Others feel that the rebound would be slower.

The pandemic will have lasting impact on deficits, consolidation plans and fiscal balance of the Centre and the States.

There are multiple ways of looking at this. First, is that, unlike in the past, we may not have the luxury, if I may say so, of assuming constant rates of growth throughout the period — both in nominal and real GDP numbers. A judgement call will be necessary. The EAC members have given the variations in the patterns which can be adopted for the award period. From out of those, the FFC will decide to finally adopt one. Second, the variability in the revenue assumptions. Again, we have received a multiplicity of advice and will need to adopt tax buoyancy numbers which may vary during the award period. Third, as a consequence of this, on the issue of fiscal numbers and the path of fiscal consolidation and the path of debt — for the Centre, the States, as well as, more importantly, for the general [that is Centre plus States] government. We will have to select a path which recognises the fact the arrangement which earlier existed may have to be re-adapted taking into account the issue of the pandemic. Finally, under our Terms of Reference (ToR), we have to look at the issue of performance-based criterion and in appropriate cases sector-specific considerations. The issue of the health sector is a prominent aspect of the overall consideration of this FC — not only by means of a health chapter but factor in the liability on account of this. Particularly with regard to those States where the health infrastructure is rather weak.

How will you ensure fiscal space for the Centre’s defence budget and allocations for reviving growth, while at the same time, States’ public health expenditure when revenues are far from buoyant?

It would be naive to pretend that these can be reconciled perfectly. There will be attempts at reconciliation. It will have to be both by way of enhanced public outlays, both by the Centre and the States, and reprioritisation of expenditure patterns to address the issues of the pandemic and health. For instance, under the National Health Mission by 2017, the States were expected to spend a certain proportion of their public outlay on the health sector which has eluded most of the States. As far as the central government is concerned, it has too to be consistent with the policy of 2017.

Is the option of increasing States’ share in the divisible tax pool beyond 42% on your table at all?

You will have to wait till you see the report. What all FCs have to do is to recalibrate. Recalibration can be both upwards and downwards. Our report for the first year [2020-21] of the six-year award period, had stayed the course with 42%. Taking off Jammu & Kashmir, [it] came to 41%. The caveat in that report is that for all the numbers, the FFC reserves the right to reconsider, re-adapt, modify them in a manner considered appropriate based on the ensuing situation.

When we were submitting this report, around this time October last year, there was no sign of the pandemic whatsoever. It appeared as a completely exogenous variable from nowhere in February. Therefore, it has necessitated us to go back to the drawing board to reconsider whatever we had assigned in the 2020-21 report.

What have the States and Centre told you about the extent of the damage to their finances, revenue and expenditure challenges on account of the pandemic?

Almost all the States have emphasised that 41 or 42% was too low; the sharing should be on the basis of fifty-fifty. The Central government has not told me what number they would be comfortable with on the vertical [devolution] but have emphasised what pressures are going to be on their own finances. It is for the FFC to make up its mind on the demands of the States. Not only on account of the States’ own normal committed liabilities and committed revenue expenditure but more so on account of the shortfall of revenues triggered both by the decline in the State GST [Goods & Services Tax] and by the fact that other sources of State revenues are proving to be somewhat inelastic. Their revenue numbers have fallen. The central government’s own revenue projections are below expectations in the BE [Budget Estimates] and the medium-term policy framework document which accompanies every Budget.

Have you addressed the loss of trust between the Centre and States on the GST compensation issue? Has it affected your calculations?

This is not a matter in the ToR or the mandate. The GST, its administration, compensation cess, resolution of the compensation cess is entirely a matter within another constitutional body which is the GST Council.

Having said this, let me say that we know there was a Compensation Cess Act. That 14% rate of growth on the particular base of tax had been guaranteed for the first five years of the GST which takes it to July 2022. That, in case the States do not achieve the 14% [growth], the margin will be made up by the compensation cess. It is quite laudable, if I may say so, that in no point in time has the Central government, notwithstanding its own fiscal distress, tried to rescind from the commitment that the 14% would be made available to the States. The question is modality and the timeframe. Of how the liabilities for this year and so on are to be paid. Since there is no provision for the States’ GST compensation liabilities to be made from the Consolidated Fund of India, it would be atrocious to even suggest that.

The States have been given two options for borrowing. It is for the GST Council and the States to collectively consider in what manner they wish to exercise this option and the Central government’s response on that. We are assuming is that the guarantee of 14% growth in State GST revenues will not be extended beyond July 2022. And that the liabilities up to then would be paid to the States.

Borrowings are likely to be the only option. Will the overall government debt be sustainable? Are you suggesting that the Fiscal Responsibility and Budget Management (FRBM) Act needs to be updated and that we should forget about fiscal consolidation till 2023?

Many members of the EAC have promoted that the FFC take the view that the FRBM Act, as it was amended in 2018, by placing equal emphasis on debt as an important macroeconomic anchor in addition to the fiscal deficit, may need a significant modification in light of the current situation. Introducing the amendments in 2018, the then finance minister did mention the possibility of the range instead of a fixed point in the fiscal target. Implied in a range is the element of cyclicality. The EAC have commented on this. To say, like the old saying, ‘The king is dead, long live the king’; Equally of the FRBM.

The FRBM, both in the earlier version and in the subsequent version, has been a valuable instrument to ensure a macroeconomic stability framework. In the pre-FRBM scenario, fiscal rectitude was not a key policy parameter. Recognising the continued long-term value of macroeconomic stability of fiscal deficit and debt as an anchor, we will certainly look at the possibility of both the issue of fixed versus range for fiscal targets. Equally the direction of the debt more than in particular fine point in the debt.

Do you endorse the Centre’s move to place conditionalities on States for increasing their borrowing limits as fair? All FCs ask States to undertake structural reforms but what about the Centre?

The States’ borrowing has to be circumscribed within the framework of Article 293 of the Constitution. There are no constitutional limitations on levels of borrowings the Central government wish to contract. But the Central government has been wise and sagacious and has learnt from the past to follow policies which are broadly embedded in fiscal rectitude than fiscal profligacy. You do require a framework for anchoring both your debt and fiscal deficit in broad conformity with the purpose and objective of continued macroeconomic stability. That for investment decisions — both private and public — this stability is the centrepiece of the macroeconomic strategy. There can be transition issues like the current pandemic has posed. That’s why I talked of flexibility in the direction of the FRBM, both in terms of the cyclicality of adjusting the fiscal deficit and operating within the range than at a fixed point.

The Covid Crisis has underlined the vulnerability of States’ finances. What takeaways are you building into your report as lessons for the long term? Are you defining what constitutes a crisis that could trigger, say, special transfers over and above the devolution award to States during times of crises?

You will have to wait for the report. The unique ToR which [was instituted] when the pandemic was nowhere in sight gives enough flexibility to the FFC to address issues of the kind you mentioned.

(Puja Mehra is a Delhi-based journalist)