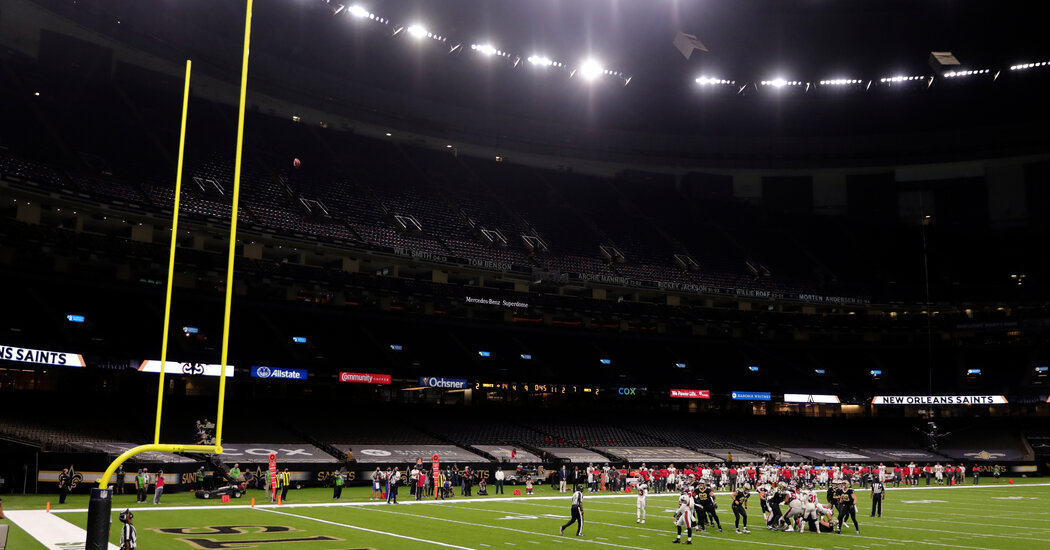 NEW ORLEANS — The ritual of Saints football went on almost as normal.

The Rev. R. Tony Ricard, the pastor at St. Gabriel the Archangel Roman Catholic Church and a New Orleans Saints chaplain, ended Mass at 10:30 a.m., a neat hour after it began, dispensing with one Sunday rite before the second, a late afternoon home game against the Tom Brady Buccaneers, took hold of the deeply Catholic city.

The draw of Brady vs. Brees, a head-to-head matchup between two of the N.F.L.’s most familiar icons, meant a prime afternoon TV slot but a relatively late start for New Orleans fans, who are generally a six-pack deep for a typical 1 p.m. kickoff, glommed together for a pregame concert in the Champions Square area aside the Superdome or stirring vats of something that started with a roux while packed underneath the Interstate 10 overpass that bounds the northwest side of the stadium grounds.

Instead, black and gold “no tailgating” signs punched the muddy ground on Perdido Street, a warning to no one in particular, since most people in town packed the party inside homes and bars, sent there by a no-fans-at-the-stadium ruling for Week 1 and the surprising threat of Tropical Storm Sally, scheduled to smack the city Monday. The emptiness lent an eeriness to the already dystopian feel of football’s return without one of its most loyal congregations.

What is football’s game day ritual without fans?

A made-for-TV event, a presentation meant for the broadest range of consumers, across the highest-bidding platforms.

N.F.L. games have prioritized the TV audience over everything else in recent years, stopping game action so often for broadcast breaks and analysis that whole customs have risen to fill the downtime — everything from scoreboard competitions to dog-fetching exhibitions. But with coronavirus pandemic guidelines in place, even the pretense that games are meant for local fans is gone, rendering each stadium merely a soundstage rather than a cathedral to sport.

The air horns that assistant coaches squawked to signal changeovers between units in warm-ups needed only to have been whistles, since there was no pregame clamor to overcome. The national anthem, such a point of emphasis for protest and patriotism for the TV audience, was piped in from a singer performing in a different area of the stadium. (Both teams stood while it played.)

After it ended, the ’90s classic “Return of the Mack” hummed at the league-mandated 70 decibels, low enough to sound as if it were coming from a party a block away, before the team captains, masked, met at the 50-yard line for the coin flip.

“Even just kind of that little buzz in the stadium that they create in between plays or during the game at 70 decibels, that just feels like a whisper compared to what it normally is,” Drew Brees said.

Tom Brady celebrated his first touchdown as a Buccaneer, a two-yard quarterback sneak, by spiking the ball and shouting, the sounds of both traveling up to the 500-level press box after the broadcast feed. Before the extra-point attempt, the ominous cawing of dozens of crows turned out to be the sound of the grounds crew raising the net behind the goal posts, the squeaky wheels of the pulley system unmuted by the normal revelry.

It was a ragged game, with both sides committing all the miscues of a preseason affair. Only, without a deafening flock of supporters, there was nowhere to place blame for the jitters that prompted false starts and a muffed kick return.

The game’s momentum finally started to gather in the third quarter when the Buccaneers fought back from Brady’s second interception of the game to narrow their deficit to one touchdown.

As he looked to a reliable target, Rob Gronkowski, to convert on second-and-4 from his own 28-yard line, Brady was rocked by defensive end Cameron Jordan. On third down, missing the home crowd and sensing a momentum-changing moment, the Saints’ inactive players began whirling towels and shouting from their socially distanced seats in the stands. In the nearly noiseless stadium, they could easily be heard on the field.

“You run out, and obviously you’re used to the energy and the emotion in the Dome,” Brees said after his team’s 34-23 win. “The fans, obviously, you know with each and every play you’re waiting for that fan reaction, right? That big cheer on a big offensive play or a big defensive stop or a special teams play or whatever it might be.”

The Saints had all of those plays — blocking a field goal in the first half and forcing a muffed kick return in the second — with enough pass-interference calls to draw groans and enough Alvin Kamara touchdowns to merit a second line at the finale.

But with the team’s faithful out of earshot, the game could have been anywhere.