If there is one thing that the first-ever fully ‘digital’ Couture Week in India has proven, it is that the role of the designer has evolved beyond the traditional expertise of many fashion designers. Their collections’ ‘narratives’ — already subservient to the demands of social media — have become more important than the products they seek to sell.

This feature, readers, will not give you the details of which designer showed which silhouettes, championed which crafts or embellishments, or how the models looked draped in yards of luxurious textiles. You only need to search Instagram and see that for yourselves. I simply wish to draw aside the veil between designer and consumer, created by the many demands of a digital showcase.

Look beyond the story

Haute Couture as the French have called it for centuries, has over the years taken on its own definition in India. This is a country many consider the last true bastion of handmade, handcrafted luxury in the world. Our handwoven textiles and painstakingly-crafted embellishments that take hundreds of hours by a single artisan, now seem to hold no inherent value on their own. All thanks to social media’s drive of democratisation and its constant craving for stories and narratives.

Now, each designer must vie for the fickle attention of a large group of viewers who may not even be able to afford their creativity and artisanship. The irony. Without a narrative attached, real customers cannot see themselves in these clothes. Think of Gaurav Gupta’s excellently-inclusive choice of models; Rahul Mishra taking us to a renovated Tijara Palace, while few of us have had the privilege to travel in the past six months; Kunal Rawal using the iconic Asiatic Library in Mumbai; and Anju Modi evoking ancient Indian beauty rituals. Without these identifiers, the customer is lost. How sad.

If this is the reality today, I congratulate Falguni and Shane Peacock for creating the most real and relevant digital experience among them all. They have their finger firmly on the pulse. Celebrity stylist Shaleena Nathani sashayed on to a fashion show set and fiddled with a model’s gown before sending her and others off on to the catwalk. As the video progressed, stylist Tanya Ghavri was spotted correcting a flawlessly worn dress, followed by Bollywood’s favourite stylists Aastha Sharma and Mohit Rai. This is Falguni and Shane Peacock talking directly to their fans. After all, which woman able to afford haute couture doesn’t dream of a Mohit Rai or a Shaleena Nathani fussing over her? They made their customers’ fantasies come alive, while others just tried to tell their ‘stories’ in the hopes of being understood.

Even with the return of JJ Valaya to the couture showcase — a designer who had his own website way before anyone even conceived of the idea in the early 2000s — the fact that he was the only one to talk directly to his viewers was eventually subsumed. By? The simple regularity of a beautifully-produced fashion show video. But no use crying over split silk.

The reality is that today, few designers in India are able to synchronise their digital experience with e-commerce backup. And the very nature of e-commerce is antithetical to the tactile and sensory experience of Indian haute couture, of which consultations with the designer are an important part. So even if a designer is fully prepared to take orders online immediately after their digital showcase, it is near impossible to predict the return on their investment. This is, after all, haute couture; by definition, it is made to order in every way imaginable. A snapshot from designer duo Falguni and Shane Peacock’s collection

Which revisits the ‘storytelling’ aspect, and the creation of X-women and men, where X represents the designer’s name. This is a good strategy, so that clients buy haute couture without actually asking for too much customisation or face-time with the designer.

I spoke to Rahul Mishra two days before his show aired on Instagram, and he pointed out that while this may be the country’s first digital haute couture fashion week, Kolkata-based designer Sabyasachi Mukherjee had already mastered the art of the Instagram reveal a number of years ago. In the process, Sabyasachi has become a one-name brand — like Madonna and Cher — for which he deserves unlimited credit. Why then are the fashion industry’s other flag-bearers not able to create their own ways of showcasing their work? Did they think an online film festival would — and here I reference a feature already published online on the Business of Fashion — be enough?

I had promised my editor at this publication that I would watch all Couture Week shows on my phone screen on the official FDCI Instagram handle like thousands of ‘non-fashion industry-related’ followers, in an attempt to see it through their eyes. 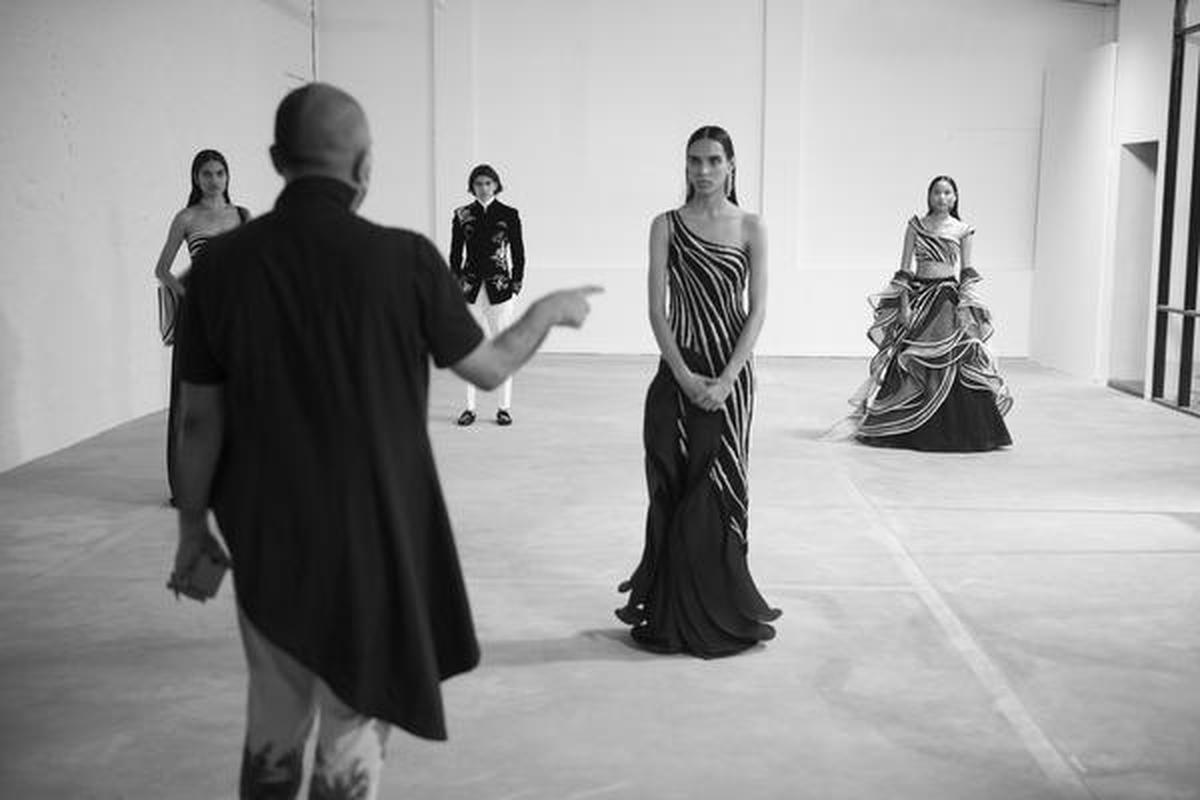 After viewing all 10 showcases over five evenings, I am left with a few simple questions: is every designer good at ‘storytelling’ in the way that Instagram demands they be? Should they be? Do they need entire myths and legends to be spun around their clothes to sell them? Maybe I am too much of an idealist, but do clothes that support and supply entire factories and craft clusters of skilled artisans with livelihoods need any other validation than their inherent value?

As I end this feature with these queries, I would like to assure my peers in the fashion industry that I have not written it to mock their efforts. We are all learning as we enter a new digital age and face its challenges, heightened by the global pandemic that continues to rage all around us. I am here simply as a questioner, and I know very well that there are no right answers. Only those that work for each designer personally and individually.