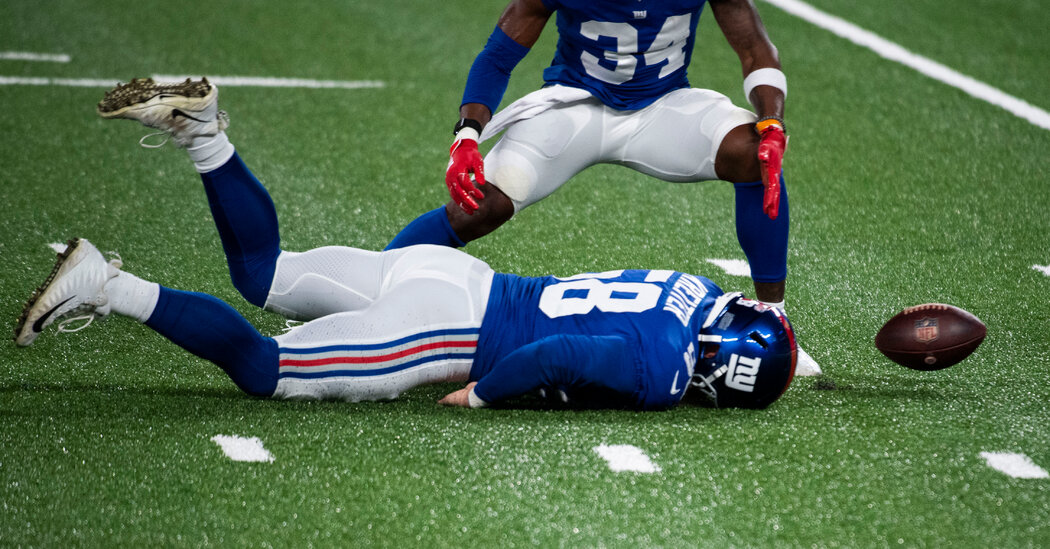 EAST RUTHERFORD, N.J. — Under normal circumstances, MetLife Stadium in New Jersey would have been awash in the blues and reds worn by the home fans. But against the backdrop of the coronavirus pandemic, the Giants and Pittsburgh Steelers opened their seasons within the drab gray interior of the stadium.

There was a low hum of artificial crowd noise and music piped in to help recreate a semblance of a typical game. But the real sense of normalcy came from the outcome. The Giants, who had scraped together only 12 wins in their last three seasons combined, played hard for new coach, Joe Judge, but the Steelers’ superior talent ensured the visitors won, 26-16, in one of the most unusual games ever played in the Meadowlands.

No fans were allowed in under local restrictions due to the pandemic, and any tension that might have been generated by pregame protests against racial injustice and police brutality were met only by the sound of the national anthem.

About a dozen Giants players knelt during the song, and the Steelers held a banner that read “Steelers Against Racism.” Most of the Pittsburgh players stood while tight end Eric Ebron raised a fist.

And then the game went ahead. But even without the fans to help generate the energy that so many players feed on, many players said that once play began, it was almost business as usual.

“It’s a blessing,” said Saquon Barkley, the Giants running back. “We were still able to go out and play the game we love.”

But it was also a heavy struggle for Barkley, who spent much of the game absorbing hits and tackles in the backfield against a strong defense that was designed specifically to stop him. He had 15 carries for only 6 yards as the Steelers stacked their front line and then brought Barkley down.

The game was also the Giants’ first under Judge, and the first since the two-time Super Bowl winning quarterback Eli Manning retired after last season. Manning’s replacement, Daniel Jones, looked much the way a talented second-year quarterback is expected to look. He made some excellent throws and runs, and showed command of the offense at times. But he also threw two interceptions, one of which turned the game on its axis.

It came 18 plays into an impressive third-quarter drive that began deep in Giants territory with the Steelers leading, 16-10. Jones improvised two good runs of his own and also completed a nervy 3-yard pass to the left, against the grain, to Barkley on fourth-and-1 to keep the drive alive.

But on the 19th play, with the Giants on the Pittsburgh 3-yard line, Jones rolled to his left with Steelers outside linebacker Bud Dupree bearing down on him with menacing intent. Jones made an ill-conceived pass attempt as Dupree appeared to make contact with Jones’s arm and the ball fluttered high in the air and came down in the arms of Steelers defensive tackle Cameron Heyward just inside the goal line for a touchback.

The lack of fans may have taken away the ambience from the game, but it may also have saved Jones from a showering of boos after that particular debacle.

“I’ll have a chance to go back and look at it and learn from it,” said Jones, who threw for 279 yards and two touchdowns to go along with his interceptions. “But I can’t make that mistake in those situations.”

The Steelers then marched down the field for a field goal that increased their lead to 19-6, and added a touchdown to put the game out of reach as they scored 23 straight points. Only a late touchdown by the Giants made the score appear more palatable, but Judge lauded the spirit exhibited by his players, even in an empty building.

“I’m proud of the way the team fought for 60 minutes,” Judge said after his debut. “That was something I really wanted to see. I wanted to see a team that played together for 60 minutes and fought regardless of score, circumstance or situation, and I saw that.”

Judge, the aggressive, tough-talking former special teams coach for the New England Patriots, was hired in January to replace Pat Shurmur after the Giants were 4-12. He ran a tough training camp but earned plaudits from players by joining in some of their team-bonding exercises, like diving in a puddle of mud during a fumble recovery drill.

On Monday, he also demonstrated solidarity with his players during the playing of the “Star Spangled Banner.” As he stood with a protective mask covering his face, he placed one hand on the shoulder of Jabrill Peppers and the other on the shoulder of Dalvin Tomlinson, who were both kneeling.

This is likely to be a transition year for the Giants, but the defense, one of the big question marks of the team — especially the injury-depleted secondary — showed some resolve against a Steeler team brimming with as much talent as optimism.

Pittsburgh is considered one of the best teams in the A.F.C., secondary to the likes of Kansas City Chiefs or the Baltimore Ravens as challengers for conference supremacy, especially with the return of Ben Roethlisberger, the veteran quarterback who played only two games last year before surgery in his right elbow.

Roethlisberger, who admitted to a heavy dose of nerves before the game, started slowly before finding his groove toward the end of the first half when he took the Steelers on a clinical eight-play, 78-yard drive in one minute, 25 seconds. He capped it with a 13-yard touchdown pass to James Washington.

Mike Tomlin, the Steelers veteran coach who guided Pittsburgh to an 8-8 record last season even without Roethlisberger for much of it, was delighted to see his team scrape away the rust and overcome the obstacles of playing their first game in front of an empty gray building.

“They generated their own enthusiasm and played with emotion,” Tomlin said. “They were just happy to play the game and I thought it was reflected in the spirit in which they played.”