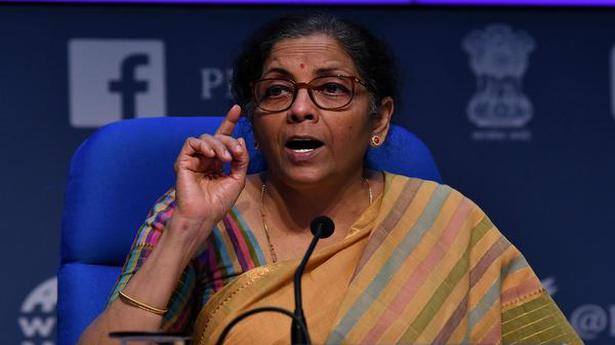 The Finance Ministry on Tuesday said more than 42 crore people have received ₹68,820-crore financial assistance under the government’s Pradhan Mantri Garib Kalyan Yojana (PMGKP) to protect poor and vulnerable from the impact of coronavirus (COVID-19) crisis.

The swift implementation of the package is being continuously monitored by Central and State governments and around 42 crore poor people received financial assistance of ₹68,820 crore under the PMGKP, the Finance Ministry said in a statement.

As per the latest data, ₹17,891 crore has gone towards payment of first instalment of PM-KISAN. Under the scheme, 8.94 crore identified beneficiaries got ₹2,000 directly in their accounts. It further said that ₹30,925 crore was credited to 20.6 crore women Jan Dhan account holders in three monthly instalment of ₹500 each.

Each beneficiary received an ex-gratia cash of ₹500 under the scheme in two equal instalments. Under the Pradhan Mantri Garib Kalyan Ann Yojana, 111.6 lakh metric tonnes (LMT) of foodgrains have been distributed to about 75 crore beneficiaries during the April-June period.

In addition, a total of 5.43 LMT pulses have also been distributed to 18.8 crore beneficiaries during April-June period under the Pradhan Mantri Garib Kalyan Ann Yojana.

Under the ‘Aatmanirbhar Bharat Abhiyan’, government announced supply of free food grains and chana to migrants for two months, and the estimate of number of migrants provided by the States was about 2.8 crore.

“During the distribution period up to August, total 2.67 LMT of food grains was distributed to 5.32 crore migrants. This works out to an average of about 2.66 crore beneficiaries per month, which is nearly 95% of the estimated number of migrants,” the statement said.

Besides, it said, 36.05 lakh members of Employees’ Provident Fund Organisation (EPFO) have taken benefit of online withdrawal of non-refundable advance from EPFO account amounting to 9,543 crore so far. Increased rate for workers under the Mahatma Gandhi National Rural Employment Guarantee Act (MNREGA) has been notified effective April 1, it said.

“In the current financial year, 195.21 crore man-days of work generated. Further, ₹59,618 crore released to States to liquidate pending dues of both wage and material,” it said.

Under the District Mineral Fund (DMF), States have been asked to spend 30% of the funds, which amounts to ₹3,787 crore, and ₹343.66 crore has been spent so far, the statement added.

These ‘Little Land Mines’ Could Prevent a Summertime Boom