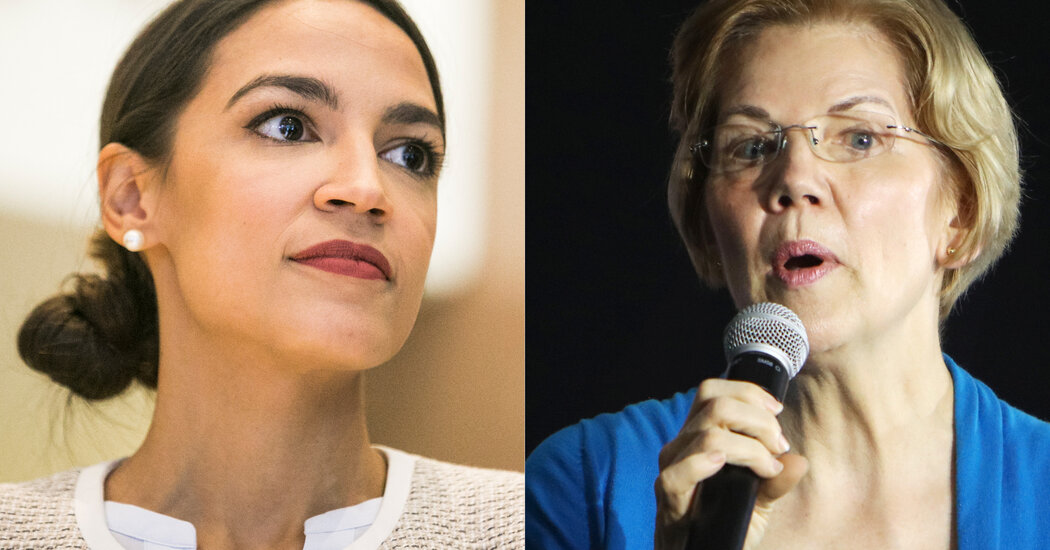 Senator Elizabeth Warren and Representative Alexandria Ocasio-Cortez have pulled out of next week’s New Yorker Festival, the star-studded annual event held by The New Yorker magazine, in solidarity with unionized editorial staff members, who are planning a digital picket line.

Ms. Warren, the Massachusetts Democrat who made an unsuccessful bid to be the Democratic presidential nominee, and Ms. Ocasio-Cortez, Democrat of New York, were scheduled to appear as keynote speakers on Monday night, the first night of the annual event. The New Yorker Union had planned a one-night picket for that same night, starting at 8 p.m.

In a Sept. 24 letter to the two politicians, the union asked them to reconsider their participation in light of its labor dispute with New Yorker management.

“The NewsGuild and The New Yorker Union are fighting for basic dignity on the job and we stand with them,” Ms. Warren and Ms. Ocasio-Cortez said in a joint statement to The New York Times. “We will not cross the picket line and attend the festival unless The New Yorker leadership agrees to the union’s demands — they should do so immediately.”

At the heart of the disagreement is a “just cause” proposal that The New Yorker Union wants included in its contract. “Just cause” is a common provision in union contracts that gives a standard that must be met for an employer to discipline or terminate employees.

Natalie Meade, a New Yorker editorial staffer and a unit chair of The New Yorker union, said that staff members felt they had no choice but to organize the Monday night picket.

“We don’t want to have to do these types of actions, but we feel like we have no voice because they are not hearing our pleas at the table,” she said.

Susan DeCarava, president of the NewsGuild of New York, which represents The New Yorker Union, said the planned appearances by Ms. Warren and Ms. Ocasio-Cortez seemed “deeply hypocritical,” given that the magazine champions progressive causes but has not reached an agreement with many of its workers.

“We couldn’t stomach it going forward without people knowing The New Yorker talks the talk, but it’s having problems walking the walk,” Ms. DeCarava said in an interview.

A spokeswoman for The New Yorker, which has been led by the editor David Remnick since 1998, said that the publication was eager to reach a fair agreement with the union.

“Like many other media outlets, The New Yorker strongly believes that its editorial standards should not be determined by arbitrators outside of The New Yorker, and we look forward to our continued discussions regarding just cause in the context of bargaining,” the spokeswoman said in a statement.

Those who had bought tickets for the virtual event with Ms. Warren and Ms. Ocasio-Cortez were notified Wednesday that they would receive refunds, the spokeswoman added.

In 2018, more than 100 New Yorker staff members — including fact checkers and copy editors, but not the magazine’s writers — announced that they were forming a union, part of a wave of organizing at media publications of all sizes. The New Yorker union was recognized by the magazine in July of that year, but it has so far been unable to reach an agreement with management on a contract.

In an internal email sent to staff on Tuesday that was obtained by The Times, New Yorker leaders said the union’s action “undermines the hard work of your colleagues on the Festival.”

“We know that the staff ultimately wants to make this institution stronger, that a robust future for The New Yorker is in all of our interests,” the email from The New Yorker management bargaining committee said. “We ask that, whatever our differences, we take our common goals to heart as we bargain toward an agreement.”

Because of the pandemic, The New Yorker Festival is being held online for the first time in its 21-year history. It will run Oct. 5 to 11. Scheduled guests include Fiona Apple, Margaret Atwood, Dr. Anthony Fauci, Ethan Hawke, Jerry Seinfeld and Yo-Yo Ma.

AMAs 2020 best and worst moments: From Justin Bieber to Megan...