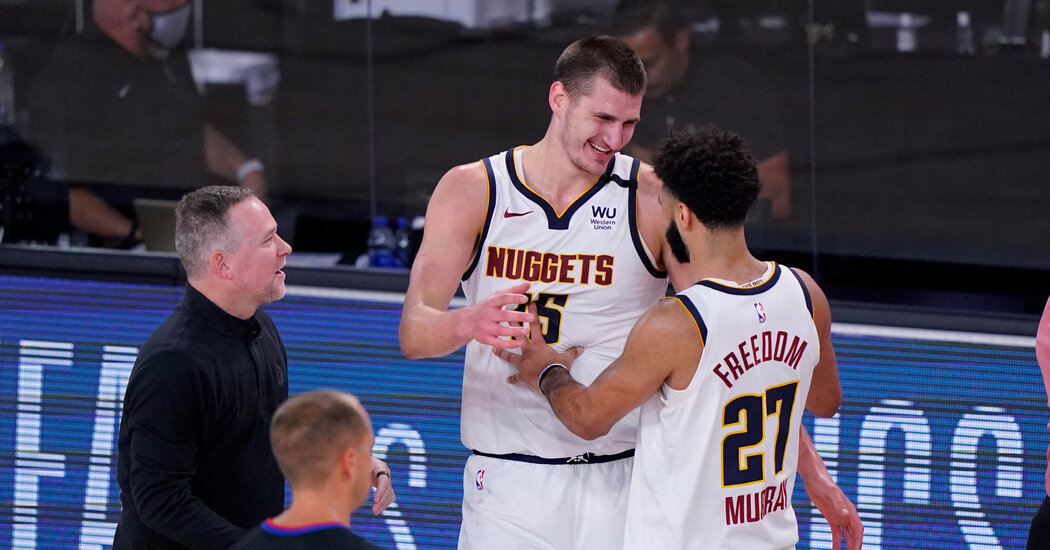 LAKE BUENA VISTA, Fla. — The game, the series and one team’s season were essentially over by the time Jamal Murray stared in the vicinity of the opposing bench as he bounced a no-look, behind-the-back pass to Nikola Jokic, the other half of the Denver Nuggets’ fearsome duo.

Jokic collected the pass and calmly sank one of his hallmark 12-foot floaters to the dismay of the Los Angeles Clippers, who responded by pushing the ball upcourt so that Kawhi Leonard and Paul George could brick a pair of 3-pointers.

There, in a tidy 30-second sequence, was the full feel of a series that surprised nearly everyone but the Nuggets, who engineered a triumph in the midst of their opponents’ collapse.

Let the post-mortems begin on the Clippers, whose season ended on Tuesday night with a 104-89 loss to the Nuggets in Game 7 of their Western Conference semifinal series. A year ago, the Clippers went all-in on a grand experiment to lure Leonard and George to Los Angeles, where there were hopes — no, expectations — of a championship run.

Instead, the Nuggets will face the Los Angeles Lakers in the conference finals after staging one comeback after another.

“So proud,” said Nuggets Coach Michael Malone, whose team will open its series against the Lakers on Friday night. “All the guys committed, never got down, believed in each other and believed in themselves. In light of all the noise outside of this series that we had no chance — we had people guaranteeing it — we found a way to beat a really good team.”

“We are just not accepting that somebody’s better than us,” Jokic said.

On Tuesday, Murray scored 40 points while shooting 15 of 26 from the field, and no shot was more crushing than the fadeaway 3-pointer he drilled over the outstretched arms of Leonard late in the fourth quarter to push the Nuggets’ lead to 18.

And there was Jokic, a center who pirouettes with the ball as if he were playing water polo back home in Serbia. He had 16 points, 13 assists and 22 rebounds, toying with the Clippers throughout. If they threw multiple defenders at him, he dumped the ball to cutting teammates for dunks. If they sagged off him, he flicked high-arcing jumpers.

“Jokic was literally unstoppable most of the series,” Clippers Coach Doc Rivers said.

Last off-season, the Clippers mortgaged a huge chunk of their future to trade for George at Leonard’s behest, sending five future first-round draft picks and two good players, Shai Gilgeous-Alexander and Danilo Gallinari, to the Oklahoma City Thunder. It is worth remembering that deal now more than ever: The Clippers gave up a ton.

The expectation was that the Clippers would immediately vie for a title. But even before the league suspended play in March because of the coronavirus pandemic, they were struggling to find chemistry and string together long stretches of cohesive basketball. Those issues were only amplified once they arrived at Walt Disney World for the restart.

Rivers rattled off the chunks of time in the league’s so-called bubble that he said several of his players had missed for different reasons: 30 days for Montrezl Harrell, 16 days for Patrick Beverley, 14 days for Lou Williams.

“Some of that came back and haunted us,” Rivers said.

On Tuesday, the Clippers looked lifeless as the Nuggets eviscerated them in the second half. Leonard and George combined for 24 points while shooting 10 of 38 from the field.

“Just chemistry, being together,” George said when asked how the team could improve. “The more we can be together, the better we’ll be.”

The Nuggets understand that better than most.

In the afterglow of the franchise’s most significant win in a decade, Malone reflected on how some of the seeds were sown late in the 2017-18 season. The Nuggets were scrambling to make the playoffs when they stumbled in March, losing consecutive games to the Philadelphia 76ers and Toronto Raptors. Malone organized a team meeting so he could ask his players important questions: Who still believed they could make the postseason? Who wanted to pack their bags for the summer?

The Nuggets responded by winning six straight before their regular-season finale against the Minnesota Timberwolves, who were tied with the Nuggets for the eighth and final playoff spot in the West. The Timberwolves had acquired veterans like Jimmy Butler, Jamal Crawford and Taj Gibson.

“They were going for it,” Malone said, and that might sound painfully familiar to Clippers fans.

In any case, Minnesota won that game in overtime — Denver narrowly missed the playoffs — but Murray and Jokic showed plenty of toughness.

“We all said, ‘We have something special here,’” Malone said. “‘Let’s stay with this. Let’s see this grow.’ And now you’re starting to see the payoff.”

There is an element of homegrown pride at work for the Nuggets that is absent from certain other teams. (Clippers, cough, Lakers, cough.) The Nuggets drafted their stars. Jokic was the 41st overall pick in 2014, while Murray went seventh in 2016. The way in which Denver’s front office constructed its roster is not lost on either of them.

“We built it from the ground up,” Murray said.

After Tuesday’s game, Jokic and Murray embraced in front of the scorer’s table as the Clippers shuffled toward their locker room. Malone looked on like an adoring parent.

Later, Murray blasted luminaries from various branches of basketball punditry — Stephen A. Smith, Charles Barkley and Shaquille O’Neal, among others — for discounting the Nuggets’ chances. Murray said he wanted “respect,” and perhaps it was a useful exercise in keeping himself motivated. But it also seemed unnecessary.

The Nuggets know they are capable of doing great things. Now, everyone else does, too.