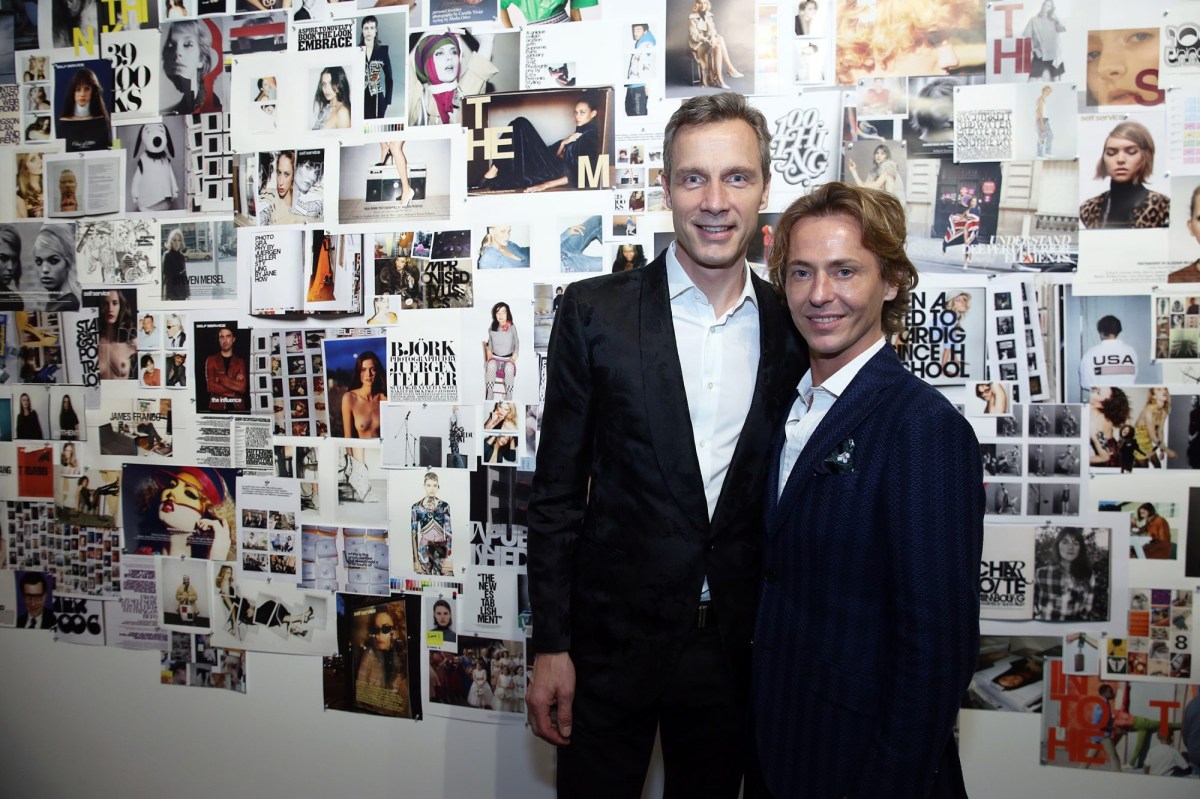 The CEO of Neiman Marcus is being blasted for flaunting his wealth in the midst of a bankruptcy that led to job losses and pay cuts for rank-and-file workers, The Post has learned.

Geoffroy van Raemdonck steered the luxury retailer out of bankruptcy on Friday — but not before he and his Dallas mansion popped up in the September issue of a luxury magazine aimed at high-net-worth people.

The 11-page PaperCity spread showcases the “1927 Italianate-style house” van Raemdonck shares with his interior-designer husband, Alvise Orsini, which is filled to the brim with expensive touches, including artworks by Andy Warhol, “silk cover walls” and 18th-century French and Italian furniture.

One guest bathroom, adorned with a dreamscape mural and “silver and mirrored cabinets from the 1930s,” is described as “the most glamorous guest loo ever.” Outside, near the pool and pool house, is a chicken coop so elaborate the author describes it as “more Versailles than farmhouse.”

Van Raemdonck and Orsini are shown in the glossy spread lounging atop a “custom sofa . . . upholstered in silk velvet.” Above them are two prints from Warhol’s “Reigning Queens” series.

“He either doesn’t care or he’s tone-deaf,” one employee griped to The Post. “Everyone is wondering why [he] agreed to show off the house while health care, bankruptcy and layoffs are the main topics for Neiman Marcus.”

It wasn’t the Belgian-born luxury merchant’s first time offending staffers since his Neiman Marcus Group, which also owns Manhattan’s Bergdorf Goodman, filed for bankruptcy in May.

On March 30, Neiman announced it would be furloughing a majority of its 14,000 employees or temporarily cutting their salaries. Van Raemdonck at the time said he would waive “100 percent” of his salary.

But it later emerged that he and other top executives stood to pocket as much as $9.9 million on the bankruptcy — with the biggest pot of $6 million being set aside for van Raemdonck, after he already received about $4 million in bonuses in February, before the pandemic hit.

On Friday, Neiman said it emerged from its Chapter 11 bankruptcy protection with a restructuring plan that eliminated $4 billion in debt and $200 million in annual interest expenses.

It’s unclear how much van Raemdonck stands to pocket as a result, but Neiman has previously said it would pay him and the other execs top dollar if the company emerged from bankruptcy with a clean balance sheet by Sept. 15, and less if the plan was confirmed by Nov. 15.

Neiman didn’t respond to multiple requests for comment. The PaperCity spread comes as the company last week said its reorganization plan would result in an unspecified number of layoffs for “selling and non-selling associates.” Staffers say the company started handing out pink slips last week.

Adding insult to injury, employees who have recently returned to work say Neiman has slapped them with bills for thousands of dollars in health-insurance premiums the company shouldered for them while they were furloughed.

Neiman is giving rehired staffers just two months to pay the premiums that would normally have been deducted from paychecks. Those who can’t afford it are being told to “take out loans to cover the costs,” sources said.

“There’s no way people can do this,” said a Neiman employee who did not want to be identified for fear of being fired. “Rent is a stretch.”

Experts say it’s unusual for companies to ask to be repaid for covering furloughed employees’ share of their health-care premiums.

“I haven’t heard of anyone asking for the money back,” said Dana Fried, managing director of national tax services for CohnReznick, who advises companies on tax issues during the pandemic.

Macy’s and Saks Fifth Avenue, which also paid for furloughed staffers’ shares of the health-care premiums after the coronavirus hit, have not asked rehired staffers to pay that money back, the stores told The Post.

It’s unclear when van Raemdonck and Orsini agreed to have their luxurious home featured in the magazine. The author of the article — PaperCity’s European editor-at-large, Filippo Tattoni-Marcozzi, who is the godfather to one of the couple’s children and Orsini’s best friend — didn’t return a request for comment.

But the pandemic looms large in the spread, which discusses how the family has coped during difficult times.

“During our frequent video-calls, I could see them together beneath those beautiful original cobalt-blue-tinted roof tiles that cover their home, safe although worried like all of us around the world,” Tattoni-Marcozzi writes.

“On the screen I watch as the children play outside in the grass and in the pool . . . and I can see Geoffroy working hard in his home office, steering Neiman Marcus through tough decisions towards a new era.”