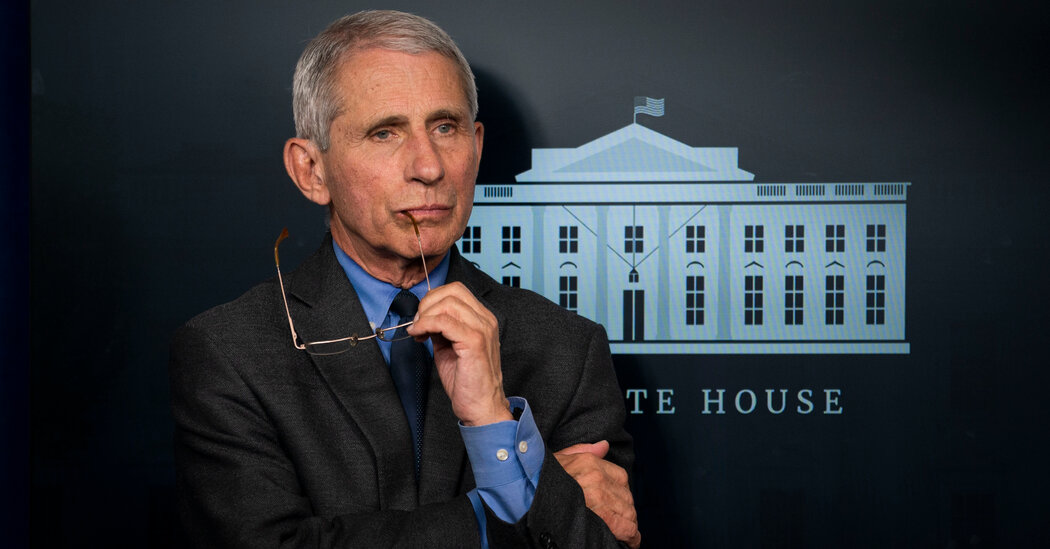 WASHINGTON — The National Institutes of Health said on Monday that one of its public affairs officers would retire after he was revealed to be surreptitiously attacking his employer and one of its directors, Dr. Anthony S. Fauci, in pseudonymous posts on Twitter and the right-wing website RedState.

The official, William B. Crews, worked for and promoted the National Institute of Allergy and Infectious Diseases while simultaneously denouncing the agency’s work and its director, Dr. Fauci, dismissing their research and public health advice in wild and conspiratorial terms under the pen name Streiff.

His work was exposed on Monday by The Daily Beast.

“We’re at the point where it is safe to say that the entire Wuhan virus scare was nothing more or less than a massive fraud perpetrated upon the American people by ‘experts’ who were determined to fundamentally change the way the country lives and is organized and governed,” Streiff wrote on RedState in June.

In another post late last month, he wrote, “If you need a mask to make it through the day without wetting yourself, well, by all means wear it,” adding, “Just don’t expect me to go along with your fantasy.”

Mr. Crews’s professional background aligns with that of a managing editor of RedState, Streiff, who has repeatedly volunteered information about his insider role within the N.I.H. The writer profile associated with Streiff lists experience as an Army infantry officer, which matches the experience listed on Mr. Crews’s LinkedIn profile. An associated Twitter account repeatedly offered knowledge of the inner workings of the N.I.H., citing personal experience working there.

Posts on RedState written by the user not only maligned Dr. Fauci and other public health officials but perpetuated conspiracies about the coronavirus pandemic.

One post referred to Dr. Fauci as a “mask Nazi.” Another warned of people being forced to “cooperate with the public health Gestapo” under “Fascist Governor Jay Inslee,” the Democratic governor of Washington.

“I can’t think of a precedent for these vicious attacks against Dr. Fauci from someone in his own agency,” said Joshua M. Sharfstein, a professor at the Johns Hopkins Bloomberg School of Public Health. “It adds a terrible new twist to the pressure that many public health officials are facing.”

A Streiff post in August falsely stated that there was as much evidence that masks did “harm” as there was that they helped protect people from the coronavirus, contradicting months of public health messaging by the N.I.H. and the National Institute of Allergy and Infectious Diseases. In the early stages of the pandemic in March, Mr. Crews described N.I.A.I.D.’s messaging as “scaremongering” and predicted that the virus would kill about as many people as the seasonal flu. Nearly 200,000 people in the United States have died in the past nine months.

A spokeswoman for the National Institute of Allergy and Infectious Diseases said that Mr. Crews informed the agency on Monday morning of his intention to retire after his online identity came to light. But she declined to say whether any investigation was pending or whether the agency believed that Mr. Crews had violated federal ethics regulations.

Those regulations generally prohibit federal employees from using government property in unofficial capacities or engaging in outside activities while on the job.

It was not immediately clear whether any of the posts and tweets believed to have been written by Mr. Crews were composed during work hours. But many of the posts in question were published midday during the workweek, according to The Daily Beast.

A common theme in the posts is that the leaders of U.S. health agencies deliberately overhyped the dangers of the coronavirus as part of a coordinated effort to damage President Trump politically.

Last week, The New York Times reported that the head of communications at the N.I.H.’s parent agency, the Department of Health and Human Services, also accused federal scientists of using the coronavirus to try to defeat Mr. Trump. That official, Michael R. Caputo, went on medical leave on Wednesday, and his science adviser, Dr. Paul Alexander, left the government.

The Times obtained emails that detailed a monthslong effort by Mr. Caputo and Dr. Alexander to raise doubts about federal science and to bully the Centers for Disease Control and Prevention into silence.

But the revelation on Monday that another public affairs officer in the Health and Human Services Department was surreptitiously engaging in similar attacks raised questions about how far the effort to undermine coronavirus science could extend.

Those efforts to privately or anonymously subvert the goals of federal scientists or spread misinformation came as top health officials were struggling to persuade broad swaths of the public to follow even basic recommendations, such as wearing masks and avoiding crowded spaces.

And as public health agencies race to beat back fringe science and viral videos attesting to a vast government conspiracy surrounding the pandemic, they now must confront elements within their own ranks attacking scientists whose messages they are paid to uphold.

“In this case, misinformation and violent rhetoric have been coming from inside the building,” Dr. Sharfstein said.