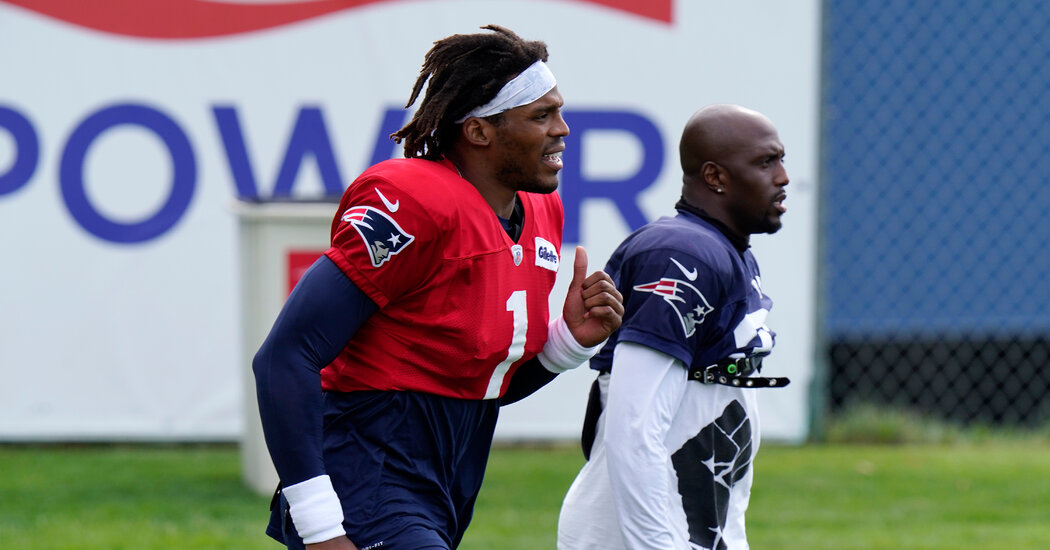 It’s going to be weird to watch football on Sunday, in a year where any flash of sports normalcy happens amid countless off-field calamities. The dissonance of playing football right now was on display on Thursday night, with excitement over the resumption of the N.F.L.’s rituals tempered in Kansas City, where Patrick Mahomes and the Chiefs were booed by a reduced-capacity crowd for standing in solidarity with the Houston Texans before the game and then cheered for clobbering them during it.

But then, the dynamic on the field has changed, too, as Tom Brady became a snowbird and the league killed the preseason but added two additional playoff spots for the 2020 season. Week 1 rarely brings clarity about how the season will end, but the fact that teams are even playing during the coronavirus pandemic is a marvel in and of itself.

Here’s what else to look out for on the first Sunday of the season:

Who will kneel and who won’t?

The Miami Dolphins kicked off the season with a powerful salvo, reciting a poem in a video explaining their decision to remain in the tunnel during the playing of both the national anthem and “Lift Every Voice and Sing,” the song known as the Black national anthem, which will be played before every Week 1 game.

“We don’t need another publicity parade, so we’ll just stay inside until it’s time to play the game,” the players said.

Even the field reflected the turmoil of this past spring and summer, with the words “End Racism” and “It Takes All of Us” stenciled in the baselines of end zones.

After initially ignoring, then halfheartedly embracing the efforts by players to fight systemic racism and police brutality, the N.F.L. reaffirmed the players’ right to peacefully protest, echoing the N.B.A., Major League Baseball and other leagues that returned to action earlier during the pandemic.

Signs of demonstration came early Sunday as teams warmed up for their games. Players were wearing league-approved decals on their helmets with the names of Black people who were killed in incendiary circumstances. While warming up for his game against the Atlanta Falcons, the Seattle Seahawks star quarterback Russell Wilson wore a black T-shirt that said “We Want Justice” in all capital letters, along with headphones and a neck gaiter pulled over his nose and mouth as a coronavirus mask.

Some players and teams around the league will be under more scrutiny regarding their decisions. Drew Brees’s June comment that he would “never agree” with those who kneel during “The Star-Spangled Banner” fractured the New Orleans locker room and drew public rebukes from the teammates he’s charged with leading. After the backlash, Brees pivoted his stance and even posted to Twitter a response to President Trump’s admonishment of kneelers. “We can no longer use the flag to turn people away or distract them from the real issues that face our Black communities,” Brees wrote.

In a less conspicuous turnaround, Baker Mayfield said in June that he would “absolutely” join in kneeling with teammates during the playing of the national anthem this season, and he got the blessing from the Browns’ owners. But on Saturday, Mayfield said in statement posted to his social media accounts that “kneeling will only create more division or discussion about the gesture” and that he would instead stand for both anthems.

Players from other teams, like Giants running back Saquon Barkley, have not ruled out the possibility of other forms of protest, including sitting out of games, while others have planned coordinated protests with teammates.

Can Baltimore keep on trucking?

Flouting football-in-2019 norms, Baltimore set all kinds of rushing records last season behind myriad ball carriers, including the league’s M.V.P., Lamar Jackson, who wasn’t too bad a thrower either; he led the league with 36 touchdown passes. That barreling offense isn’t likely to stall out against Cleveland, which was 30th in rush defense last season.

In their first meeting last season, however, it was Baltimore’s turn to give up a highlight run, as Browns running back Nick Chubb burned Ravens safety Earl Thomas for an 88-yard dash in which Chubb hit almost 22 m.p.h. on the breakaway. Chubb ran for 165 yards and three touchdowns in that game but was held to 45 yards on 15 carries in the Browns’ second game of 2019 after Baltimore shored up its run defense with major additions to its linebacker core.

Chubb is back this season, and the goat in that matchup, Thomas, is out, having been released from the team for disciplinary reasons. The Ravens have won their last four opening-weekend games, and the supposedly reinvigorated Browns offense doesn’t figure to stop that streak.

How will Tom Brady look in a Bucs uniform?

Tom Brady and Drew Brees are the two oldest active players in the N.F.L., making Sunday’s meeting the first in league history between two starting quarterbacks age 40 or older. And while Brady will surely delight in leading the strongest receiving crew he’s had in years — Mike Evans and Chris Godwin were both 1,000-yard receivers last season, and both stand over 6 feet tall — Tampa Bay may not unleash many fly routes just yet, given the lack of a preseason to work on timing and communication. Of course, with Leonard Fournette, the newly acquired running back who rushed for more than 1,000 yards in two of his first three seasons, a ground-based Bucs attack might still flourish.

That doesn’t seem like a likely approach from New Orleans, despite the Saints’ signing of Alvin Kamara on Saturday to a five-year extension reportedly worth $77.1 million, with a $15 million bonus. Ahead of the matchup, Brees sounded another acknowledgment that this season might be his last. “I’m on borrowed time,” Brees said. “I’ve got nothing to lose. So I’m turning it loose and letting the chips fall where they may.”

Will the 49ers be able to play?

This game’s matchups have all the dynamism and promise of a new season’s unveiling. Cardinals quarterback Kyler Murray enters his second season with an elite wide receiver, DeAndre Hopkins, whom the team acquired in a trade in March. The duo should make their debut in a game that also places Murray, last year’s rookie offensive player of the year, against Nick Bosa, last year’s rookie defensive player of the year.

San Francisco’s pre-snap shell game will lose some options with receiver Deebo Samuel out nursing a left foot injury and Emmanuel Sanders having left in free agency. But hovering over this game are the California wildfires, which may force a postponement. The air quality index in Santa Clara, Calif., where the 49ers play, has to hit 200 for the N.F.L. to move the game; it was 177 on Saturday.

The wildfires could also affect Sunday night’s game, in which the Dallas Cowboys visit the Los Angeles Rams, though that appeared less likely.