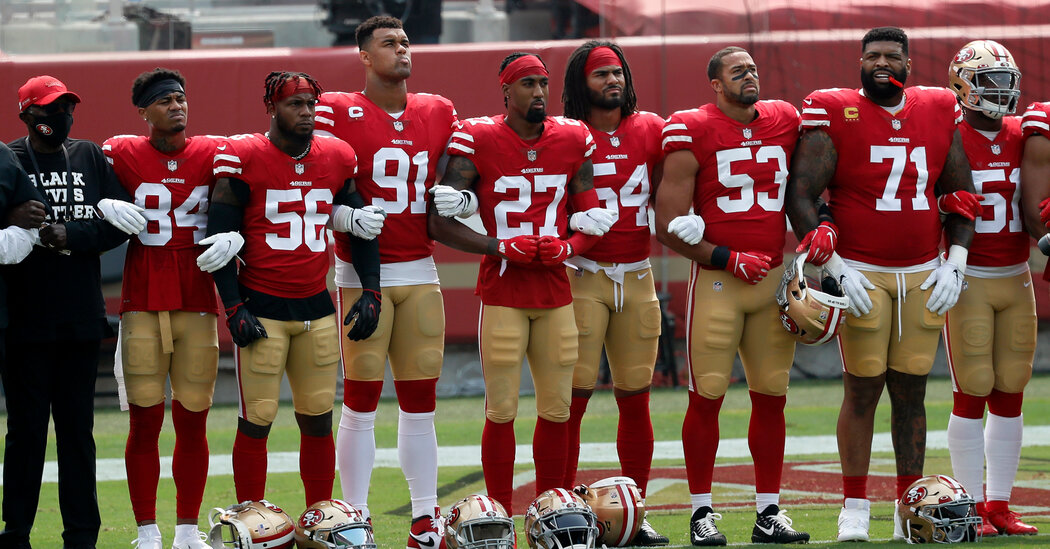 Their opponent, the Green Bay Packers, stayed in the locker room during the playing of the national anthem and “Lift Every Voice and Sing,” the team said, “so as to not distract from our message that we stand united for social justice and racial equality.”

While other sports leagues were delayed, interrupted and shut down by the coronavirus, starting in March, the N.F.L., the nation’s most popular league, overcame myriad hurdles to begin its regular season on time, albeit with a vastly altered look because of the pandemic. Stands were empty, no cheerleaders strutted the sidelines and the singers performed the national anthem and “Lift Every Voice and Sing” from remote locations in most cases.

Even the field reflected the turmoil of this past spring and summer, with the messages “End Racism” and “It Takes All of Us” stenciled in the end lines. After initially ignoring, then coming around to embrace, the efforts by players to fight social injustice and end police brutality, the N.F.L. reaffirmed the players’ right to peaceful protest, echoing the N.B.A., Major League Baseball and other leagues that returned to action earlier. Players wore league-approved decals on their helmets calling for unity and an end to hate and racism.

The players took advantage of the league’s embrace of their efforts, even at the cost of alienating fans who do not want social statements to encroach on their sports viewing. The gesture of kneeling during the anthem was started by 49ers quarterback Colin Kaepernick in 2016; he hasn’t been picked up by a team since opting out of his contract in March 2017 and has become a potent symbol of protest across sports.

“The days of ‘sports and social issues aren’t going to mix,’ that’s the old world,” said Michael Rubin, a social justice activist and the executive chairman of Fanatics, which operates merchandise websites for the N.F.L. and other major leagues. “These issues are top of mind, and the players are going to use their platforms. I don’t see any chance of this reversing course.”

Still, as the self-proclaimed “America’s game,” the N.F.L. remains a lightning rod for controversy in everything it does. To avoid being swept into the debate inflamed by President Trump over whether it is unpatriotic to protest during the playing of the “Star-Spangled Banner,” the Buffalo Bills, the Jacksonville Jaguars, the Jets and the Miami Dolphins, as well as the Houston Texans, who played Thursday, stayed in their locker rooms during the anthem. The Arizona Cardinals did the same, while their hosts, the 49ers, were on the field.

A Gymnastics Coach Accused of Emotional Abuse Speaks Out: ‘I Cared Too Much’