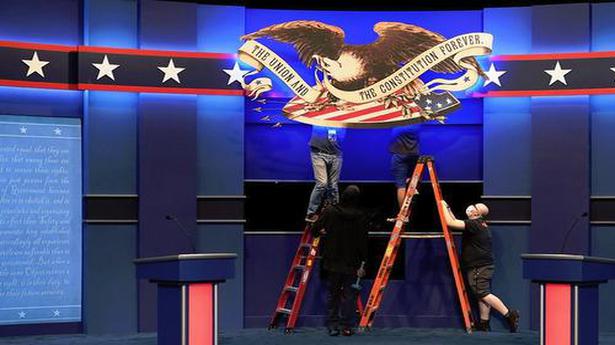 The Democratic nominee is leading Trump 54% to 44% in Pennsylvania, according to a new poll.

As the presidential candidates prepared to make their way to Cleveland, Ohio, for the first presidential debate on Tuesday night (Wednesday morning India time), a new poll in the crucial State of Pennsylvania showed Democratic nominee Joe Biden with a “sizeable but not definitive” lead over the incumbent — President Donald Trump.

The Washington Post-ABC poll shows Mr. Biden leading Mr. Trump 54% to 44% among registered voters and 54% to 45% among likely voters, the Post reported. However, the margin of error for each candidate’s level of support is 5%, making this significant lead less than definitive.

With 20 electoral seats, Pennsylvania — from where Mr. Biden hails — is key to Mr. Trump retaining the presidency. He had squeaked past Hilary Clinton in 2016 in Pennsylvania, winning the State by a margin of less than 1%.

The last time it went to the Republican presidential candidate was 1998.

Both polls show that Mr. Biden is giving Mr. Trump a run for his money among voters that helped Mr. Trump to the White House in 2016. Mr. Trump’s lead (in the teens) in both polls among uneducated White voters has declined significantly since 2016. Similar to Ms. Clinton in 2016, Mr. Biden holds a 23-point advantage among College graduates and a 64% lead among non-Whites in the ABC-Post poll, the Post reported. Some State-level polls in 2016 were not accurate predictors of the winner in that year and they are not definitive indicators of voting outcomes.

On Tuesday, candidates made their way to Ohio where the first of three Presidential debates is being held at Case Western Reserve University and the Cleveland Clinic. Moderated by Chris Wallace of Fox News, the debate will address the following topics: Mr. Trump and Mr. Biden’s records, the Supreme Court, COVID-19, the economy, race and violence, and the integrity of the election.

Democrats and Republicans are in the throes over a battle on whether the Supreme Court vacancy created by the death of Ruth Bader Ginsburg should be filled now or by the newly-elected President. Mr. Trump has attempted to delegitimise the election by questioning — without sufficient factual basis — the integrity of an election in which at least 75% of Americans will be eligible to receive postal ballots.

Also likely to be debated is a New York Times weekend expose on Mr. Trump that revealed, among other things, that he had not paid federal income tax for 11 out of 18 years that the Times looked into. The second and third presidential debates will be held on October 15 and 22 and the Vice Presidential debate on October 7.