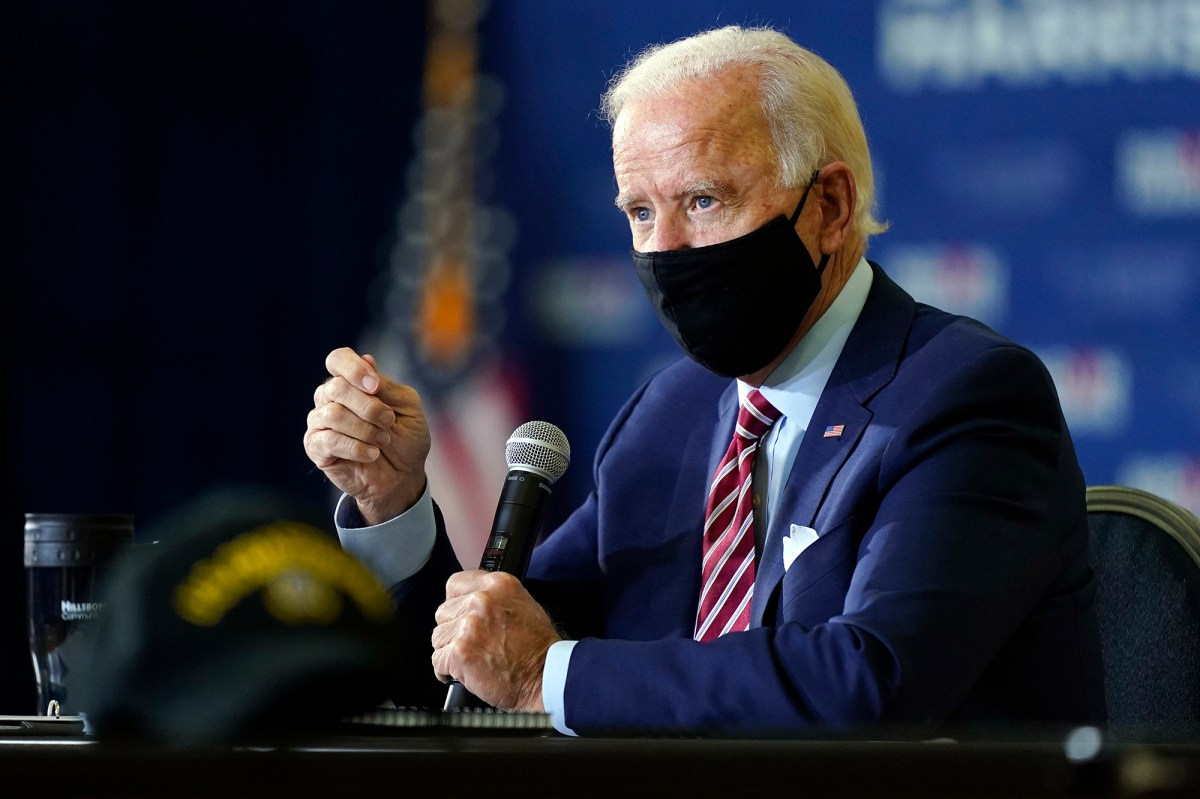 Democratic presidential nominee Joe Biden admitted that while he believes that he would have the legal authority as president to implement a nationwide mask mandate, he “can’t guarantee you that yet.”

Speaking to reporters Wednesday in Wilmington, Del., the former vice president remarked that “there is a question” that he believed “can be answered in the positive” over “whether I can mandate over state lines that every single state has to comply.”

Biden made the comments after being asked by a CNN reporter how he would implement a national mask mandate.

“Our legal team thinks I can do that, based upon the degree to which there’s a crisis in those states, and how bad things are for the country,” Biden said, later adding, “I would make the case — I’d make the case why it’s necessary. I’d have the scientists arrayed to lay out in detail why. And I would go to every governor … Republican and Democratic governors and I’d say we have to have this national mandate. We must do it.”

The reporter then pressed the 2020 Democrat, asking how he would manage pushback from Republican governors.

“Well the question is whether I have the legal authority as president to sign an executive order. We think we do but I don’t — I can’t guarantee you that yet,” the Democratic presidential hopeful responded.

Earlier this month, Biden appeared to walk back his mid-August call for an immediate, three-month-long nationwide mask mandate, something he originally argued would save about 40,000 lives.

During an interview with AZFamily’s “Politics Unplugged” in early September, Biden was questioned about his repeated pledges to use the powers of the presidency to force Americans to wear masks.

Asked to respond to the governors who had appreciated President Trump’s more targeted coronavirus approach, which gave more authority to the states, Biden said, “Well, I hope you could trust the governors.

Given the legal challenges, Biden said, he would “plead with” people to wear a mask, adding, “I’d set an example.”

Biden then noted that case rates were dropping in places where local authorities had implemented mask orders.

“It’s about making sure the public is safe and secure, and that is a local decision but there should be national standards laid out as to how it should be gone about. You can’t mandate that,” he continued.

When calling for the mandate in August, he said, “I hope we learned a lesson. Hope the president has learned the lesson. But again, this is not about Democrat, Republican or independent. This is about saving Americans’ lives.”

Biden said at the time that he would use his federal powers to force mask wearing if elected in November.

Speaking to Pittsburgh CBS affiliate KDKA in June, the Democrat said he would sign an executive order requiring Americans to wear face coverings.

“The one thing we do know, these masks make a gigantic difference. I would insist that everybody in public be wearing that mask. [For] anyone to reopen, it would have to make sure that they walked into a business that had masks,” he said.

Asked if he would use his federal powers to require Americans to don masks, he replied, “Yes, I would from an executive standpoint, yes I would.”

While the vice presidential hopeful stood by the 2020 Democrat when he announced his call for a national mandate, saying it would be one of their administration’s first orders of business, she walked back how enforceable the effort would be in an interview with NBC’s “Today” show in late August.

“It’s a standard. I mean, nobody’s going to be punished,” she said when she was asked how the order would be enforced.

“Nobody likes to wear a mask, this is a universal feeling, right? So, that’s not the point,” the California Democrat added.

“The point is this is what we as responsible people who love our neighbor, we have to just do that right now. God willing, it won’t be forever.”