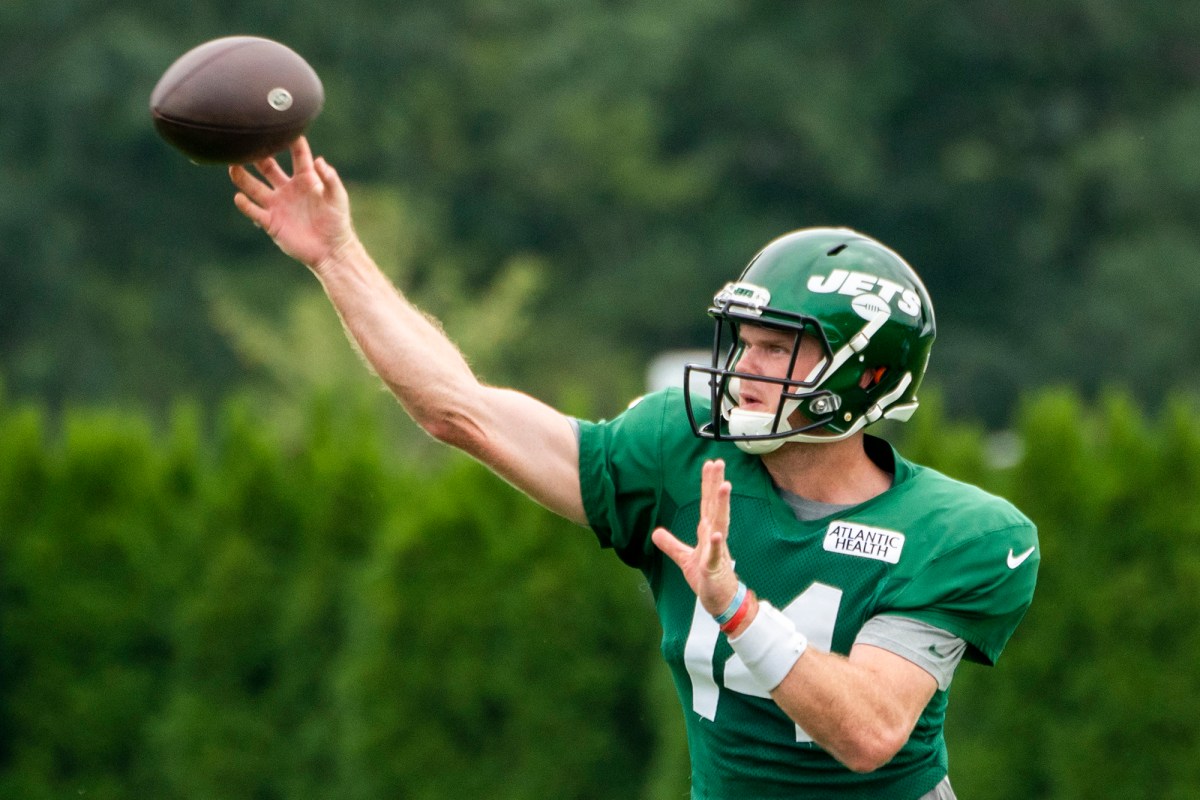 A tug of war over Sam Darnold has already begun to rage:

He has a dearth of weapons, no No. 1 receiver, no Le’Veon Bell or running game, an overhauled offensive line, and a head coach who has reminded no one, except for Christopher Johnson apparently, of Bill Walsh.

On the other side of the rope:

No excuses. It’s Darnold’s third year. Thankfully, no mononucleosis. No one is asking him to be Patrick Mahomes or Lamar Jackson. But look what Kyler Murray did at the start of his second season in Kliff Kingsbury’s Air Raid offense.

For the first two seasons of his career, Darnold has enjoyed a sweet, innocent honeymoon.

The honeymoon isn’t over.

Very few of them last forever.

Ask any QB of the NYJ who followed Joe Namath.

There is a daunting burden, starting on Sunday at 1 p.m. at MetLifeless Stadium, that Sam Darnold will now be asked to bear:

Pull your own weight, and simultaneously pull the weight of the franchise along with it, as much as you possibly can.

If you possibly can.

Without breaking your back.

The worst fear of all Jets fans:

The poor kid will be Samstrung by all that swirls around him.

Darnold needed more playmakers and protectors even before Week 1. He needs considerably more help from coach Adam Gase. But fair or not, he was the Chosen One, third pick of the 2018 draft, ahead of Josh Allen, ahead of Jackson, to make everyone around him better to some degree at some point in his career.

There is no better time or place than now.

With players around him who desperately need their quarterback to make them better and lead them.

Those were the owner’s words about his franchise quarterback.

Given the circumstances, given the supporting cast, no one should be expecting an absolutely sterling extraordinary Sam.

It doesn’t mean Darnold can’t get off the canvas and give the Jets a puncher’s chance against the 49ers. Who will have Nick Bosa breathing down his neck. Who won’t have Richard Sherman shadowing one of his receivers. None of whom are named Keyshawn Johnson or Wayne Chrebet. Or even Jamison Crowder.

Welcome to Sammy and the Miracles.

Sam Darnold and the Replacement Jets.

Darnold threw 13 touchdown passes against four interceptions over the second half of the 2019 season. He improved his completion percentage from 57.7 to 61.9. . He should be expected to reach 65 percent this season.

Gase has to get his quarterback in an early rhythm, because Week 1 Darnold looked alarmingly harried and unnerved, unable to get his footwork right and slow the game down in his head and be the fearless, swaggering field general.

A damning comparison: Jimmy Garoppolo’s completion percentage last season was 69.1 percent on his way to the Super Bowl.

Week 1 overreaction is a rite of the waning days of summer. The immediate gratification that Chiefs fans (Mahomes), Ravens fans (Jackson) and Texans fans (Deshaun Watson) have celebrated makes you forget that it wasn’t until his fourth-year Super Bowl run that Eli Manning was wholeheartedly embraced by Giants fans.

If he fails to progress, if Gase fails to develop him, and GM Joe Douglas is armed with a top-five pick and the draft capital to make a run at, oh, Trevor Lawrence, all bets on Darnold’s Jets future will be off. Not to mention Gase’s.

But that’s for tomorrow. Today is for still believing that Darnold is made of the right stuff, and is the symbol of hope that Jets fans have been clinging to since the day he showed up, and laughed off a pick-six on his first NFL throw and whipped the Lions at Ford Field.

Here’s what you like: The kid looks in the mirror. Doesn’t throw anyone under the bus. Same guy, every day. Teammates believe in him. Patience is a virtue sometimes with 23-year-old franchise quarterbacks. Though try telling that to his fan base, 52 years after Broadway Joe.