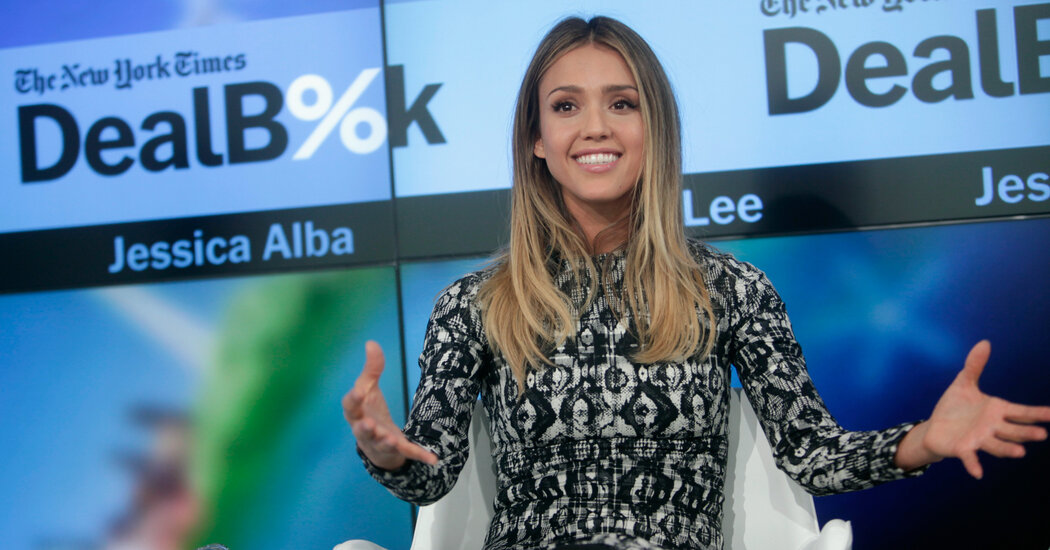 Jessica Alba’s Honest Company has hired Morgan Stanley and Jefferies to run a sale process that it hopes will value the company at more than $1 billion, according to people familiar with the matter, who spoke on condition of anonymity because the plans were confidential.

The Honest Company, which sells “clean” diapers, wipes and more, has about $300 million in sales and is profitable, today’s DealBook newsletter reports.

The valuation that the personal care company receives will be a test of its turnaround. After making a splash with natural products and celebrity backing — and raising funds at a $1.7 billion valuation as it considered an I.P.O. — it ran into trouble in 2016 when reports questioned its ingredient-labeling practices. Growth stalled, and the company’s valuation had dropped to less than $1 billion by 2017.

Honest later embarked on a turnaround, hiring as Nick Vlahos of Clorox as its chief executive. Mr. Vlahos focused on expanding research and development and rolling out a clean-beauty line. Ms. Alba remains the face of the brand, which now also sells in physical stores like Walgreens.

Potential suitors might include larger consumer companies looking to expand their foothold in the clean-beauty market or a special-purpose acquisition vehicle that could merge with Honest and give it a public stock listing.

A representative for Morgan Stanley declined to comment. Representatives for Jefferies and The Honest Company did not respond to requests for comment.

Doug Parker, the chief executive of American Airlines, said on Sunday that if Congress did not extend a payroll support program to airlines this week, then 100,000 aviation professionals would be out of work on Oct. 1.

“Back in March, we all thought demand would be back, we wouldn’t need support beyond this time,” Mr. Parker said in an interview on the CBS public affairs show “Face the Nation.” “Unfortunately, that hasn’t been the case.”

Airlines have been battered by the coronavirus outbreak, as business travelers — who made up an estimated 10 percent of all passengers on the major airlines but generated about half the airlines’ revenue — continue to work remotely and stay away from unnecessary air travel.

American Airlines said on Friday that it would take a $5.5 billion loan from the Treasury Department as part of funding made available to carriers through the government’s economic stimulus plan, and that it expected the loan to grow to $7.5 billion next month. United Airlines is expected to take out a loan of similar size, though Southwest Airlines and Delta Air Lines declined the funding. But that is separate from the payroll support program.

Mr. Parker said in the interview that American Airlines had seen “gradual improvement,” but that revenue was still expected to be down by 65 percent in the fourth quarter, which was a “big problem.”

“A vaccine certainly would be really helpful,” he said. “But in between there, having quarantines go away, having companies bring people back into the office, returning to work, those types of things have a huge impact on the need for air travel.”

Amazon has been one of the biggest winners in the pandemic as people in its most established markets — the United States, Germany and Britain — have flocked to it to buy everything from toilet paper to board games.

What has been less noticed is that people in countries that had traditionally resisted the e-commerce giant are now also falling into its grasp after retail stores shut down for months because of the coronavirus.

The shift has been particularly pronounced in Italy, which was one of the first countries hard hit by the virus. Italians have traditionally preferred to shop in stores and pay cash. But after the government imposed Europe’s first nationwide virus lockdown, Italians began buying items online in record numbers.

Even now, as Italy has done better than most places to turn the tide on the virus and people return to stores, the behavioral shift toward e-commerce has not halted. People are using Amazon to buy staples like wine and ham, as well as web cameras, printer cartridges and fitness bands.

“The change is real, the change is deep and the change is here to stay,” said David Parma, who has conducted surveys about shifting consumer behavior in Italy for Ipsos in Milan. “Amazon is the biggest winner.”

With unemployment about 9 percent nationwide — and closer to 20 percent in areas of southern Italy — many are eager for Amazon to expand.

When Francesca Gemma graduated from college in 2016, Amazon was the only company hiring in her area. She now works at an Amazon fulfillment center picking hundreds of products from the shelves every hour so the goods can be shipped to customers.

“On the first day the muscles of my legs felt like I had done a marathon, I couldn’t climb up the stairs,” she said. “It’s not for everyone, but it’s a job.”

Tens of millions of people could lose their job-based insurance by the end of the year, said Stan Dorn, the director of the National Center for Coverage Innovation at Families USA, a Washington consumer group. “The odds are, we are on track to have the largest coverage losses in our history.”

Thousands of small businesses that had always expressed difficulty in providing employee health insurance under the Affordable Care Act are now in far worse trouble because of the pandemic. Hopes have also dimmed for another federal aid package before the presidential election, which could provide badly needed funding for businesses that continue to struggle.

Not only are businesses shedding workers, with the nation’s unemployed numbering roughly 13.6 million, but employers are cutting expenses like health coverage, and projections of rising numbers of uninsured have grown bleak.

Estimates vary, but a recent Urban Institute analysis of census data says at least three million Americans have already lost job-based coverage, and a separate analysis from Avalere Health predicts some 12 million will lose it by the end of this year. Both studies highlight the disproportionate effect on Black and Hispanic workers.

“There is this expectation that we are going to see big losses in employer-based coverage,” said Sara R. Collins, a vice president at the Commonwealth Fund, a nonprofit group that studies health care.

Some of these individuals will be able to qualify for Medicaid or sign up for an Obamacare plan. “There is still a safety net that wasn’t there 10 years ago,” Ms. Collins said.

But others may not be so lucky. That net is fraying, and some employers whose states have allowed them to defer payments for such bills as insurance premiums, are worried they won’t be in better shape next year.

Chinese officials are trying to inoculate tens of thousands, if not hundreds of thousands, of people with unproven coronavirus vaccines outside of the traditional testing process, shocking global health experts and raising concerns around harmful side effects and issues of consent.

The government is injecting three possible vaccines into workers who are considered essential, as well as other people. The vaccines are in Phase 3 trials, which are mostly being conducted outside China in people who are closely tracked and monitored. It is not clear if China is taking those same steps for people getting shots in the country, or if recipients have been fully warned about the risks of taking unapproved vaccines.

Chinese vaccine makers and state-owned companies have asked people taking vaccines to sign nondisclosure agreements that prevent them from talking to journalists.

“My worry for the employees of the companies is it may be difficult for them to refuse,” said Dr. Kim Mulholland, a pediatrician at the Murdoch Children’s Research Institute in Melbourne, Australia, who has been involved in the oversight of many vaccine trials, including those for a Covid-19 vaccine.

A senior Chinese official said this month that a vaccine could be made available to the public as early as November.

Japan is providing millions of dollars in subsidies to manufacturers and holding discussions with India and Australia about improving their regional supply chains as the country aims to diversify its supply chain out of China.

But it has been walking a fine line with Beijing and insisted the efforts are not aimed at any specific nation.

Japan, the world’s third-largest economy after the United States and China, has provided $23 million in government subsidies to domestic manufacturers like the household goods company Iris Ohyama as part of its onshoring effort.

Its approach has contrasted with the United States, which has taken a more aggressive stance toward Beijing. Still, both countries are finding it difficult to reduce their reliance on China, with its inexpensive and well-trained work force and infrastructure.

“In one sense, the Japanese government tried to expand the room for business cooperation with China, but as the most important ally of the U.S. in the Asia-Pacific, Japan must follow American strategic trends,” said Masayuki Masuda, a senior fellow at Japan’s National Institute for Defense Studies.

That means “trying to keep a balance between China and the U.S.,” he said. “If we restrict normal business activities with China, the damage would be very big. So, where is the red line?”

The Bond film ‘No Time to Die’ is delayed again as the virus stymies Hollywood.