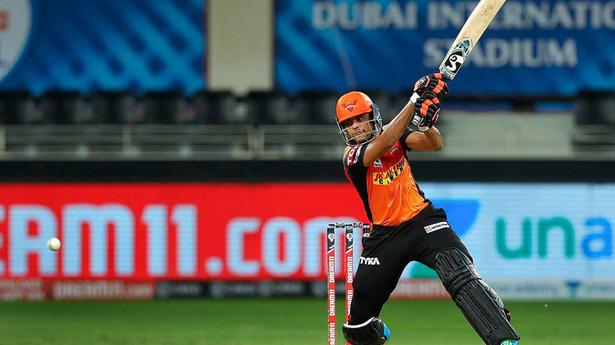 The two add 77 for the fifth wicket in seven overs after the team slips to 69 for four; Super Kings’ batting comes undone yet again.

A week’s break seemed to have made little difference to Chennai Super Kings, as it slumped to its third straight defeat in as many matches, losing by seven runs to Sunrisers Hyderabad at the Dubai International Stadium on Friday.

Chasing a target of 165, the Super Kings batsmen looked all at sea, yet again, with no real intent shown against a disciplined Sunrisers attack. The chase got off to a poor start with Shane Watson (1) and Ambati Rayudu (8) falling cheaply. Rashid Khan and Abdul Samad then applied the squeeze in the middle overs to suffocate M.S. Dhoni’s men. Only Faf du Plessis looked like forcing the issue, hitting four boundaries in a 19-ball 22, but he was run out.

The middle-order of Kedar Jadhav, Dhoni and Ravindra Jadeja struggled against the spinners with the score reading 44 for four at the halfway stage. After taking 18 balls to get his first boundary, Jadeja did produce a late blitz (50, 35b, 5×4, 2×6) with skipper Dhoni remaining unbeaten on 47 off 36 balls. But it was too little too late.

Earlier, after electing to bat, a late flourish from youngsters Priyam Garg (51 n.o., 26b, 6×4, 1×6) and Abhishek Sharma helped Sunrisers Hyderabad post 164 after it was reduced to 69 for four.

Garg and Abhishek (31, 24b, 4×4, 1×6) had the tall order of rebuilding the innings and the youngsters proved equal to the task, taking time to settle in before erupting towards the end. The duo put on 77 for the fifth wicket off 42 balls.

Sunrisers lost Jonny Bairstow in the first over before Manish Pandey (29, 21b, 5×4) showed promise with some clean hitting in the V. But it didn’t amount to much. After Pandey’s dismissal, Warner tried to take charge and hit Piyush Chawla for two boundaries, but the leggie had him caught spectacularly by du Plessis at long-on. Off the very next ball, Kane Williamson was run out.

It was then that the Garg-Abhishek double-act unfolded. Abhishek was the initial aggressor, hitting Jadeja for a four and six, before Garg tore into Sam Curran in the 17th over, hitting him for three fours and a six. The Super Kings were tardy on the field, with Jadeja and Shardul Thakur dropping Abhishek off back-to-back deliveries. Sunrisers collected 64 runs from the last five overs, a phase that ultimately proved the difference.

The College Athletes Who Are Allowed to Make Big Bucks: Cheerleaders