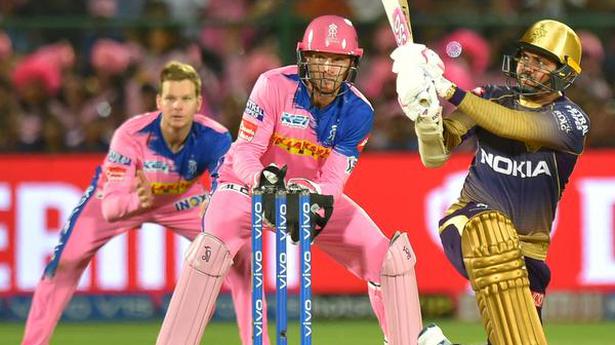 Smith’s men suffer 37-run defeat in their first game outside Sharjah; pacers Cummins, Mavi and Nagarkoti complete a demolition job for Karthik’s side.

There was no third 70-plus score on the trot for Sanju Samson. There was no second miraculous knock from Rahul Tewatia. And there wasn’t another great chase from Rajasthan Royals.

Kolkata Knight Riders brought Royals, who had won both their games in Sharjah, crashing down to earth at the Dubai International Stadium on Wednesday, winning their IPL encounter by 37 runs.

Responding to Knight Riders’ 174 for six, Royals finished with 137 for nine.

Steve Smith, who didn’t look as composed as he did in his last two outings, tried to hit fellow-Australian Pat Cummins high and far down the leg-side, but only managed to edge it to rival captain Dinesh Karthik. His dismissal brought to the wicket the other in-form Royals batsman, Samson.

Shivam Mavi, after bowling a tight first over, ensured that the dasher from Kerala would not make it a hat-trick of awards. Samson failed to time his pull and ended up giving a comfortable catch to Sunil Narine at mid-wicket.

The 21-year-old from Uttar Pradesh wasn’t done yet. In his next over, he took one of the most prized wickets in white-ball cricket. Jos Buttler went for a slash off a wider ball and was taken at short third man by Varun Chakravarthy. Kamlesh Nagarkoti, another young pacer from India’s under-19 World Cup-winning team in 2018, took over from Mavi. He dismissed Robin Uthappa and Riyan Parag cheaply to reduce Royals to 42 for five.

The stage was now set for the man-of-the-moment, Tewatia. But he lasted only 10 balls, his middle-stump uprooted by mystery-spinner Varun.

The England quick came up with a superb spell. He bowled with express pace and was used well by Smith. The beauty to take the outside edge of Karthik’s bat was one of the balls of the IPL thus far. He also accounted for the mainstay of the Knight Riders batting, Gill. But this was Knight Riders’ night.