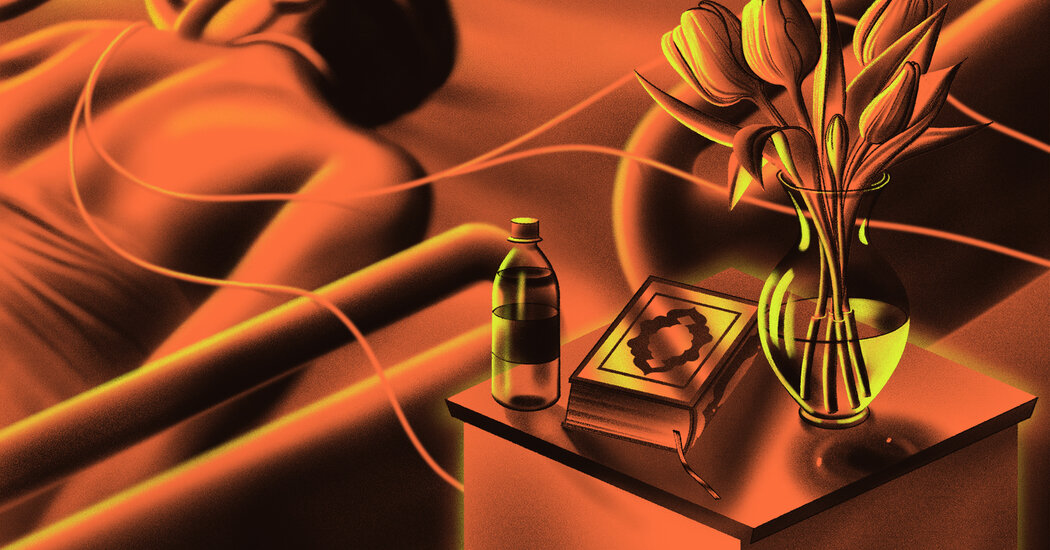 It was about a week before the chest X-ray. We were on rounds when the nurses called us to his room, yelling through the closed door. From outside the room I took in the bright red blood in the vent tubing and suction canister, oxygen saturation wavering. We moved quickly to stabilize him while one of the resident doctors called his family to come in. It would be the first time they had seen him in person in a month, as the rules at the time said that family members could only enter if a loved one might be dying.

We met the son and his mother in the hallway to help them put on personal protective equipment. I spun the boy around like a surgeon in the operating room, tying the yellow gown tight behind his back. He had brought flowers to say thank you. His mother was quiet, holding a small prayer book that we helped her slip into a biohazard bag. The boy put his arm around her, a tender protective gesture. Together we all entered the room. I remember how I explained to them that the ulcers on my patient’s face were from lying on his chest, the tubes in his neck and groin were to remove his blood and run it through a lung bypass machine. The son nodded, as if this information made things better. His mother prayed, and I told them that we would do everything we could.

After more than three months, my patient is finally home. He remembers nothing from the intensive care unit. When he first made it out of the hospital and to rehab, shocked to learn that April had turned to June and believing that he must have been in a catastrophic car accident, he had asked his wife about what happened. She told him it was better not to know too much, and he took those words to heart. Now, his scars are fading, but he struggles to sleep at night, awakened by vivid nightmares of his childhood. His son notes that he is more forgetful now. He takes inventory of the ways his body has changed. A patch of skin on his left thigh where he has lost sensation, an ache in his shoulders and chest, the tip of a finger blackened by lack of blood flow. At rehab the doctors told him it might have to be amputated, but with time it looks like it might be saved.

There in the clinic room, as I listen to the air moving in and out of my patient’s remarkably clear lungs, I remember how the nurses turned his head toward Mecca and bathed his body in holy water that his family dropped off in the hospital lobby when they thought he might die. I remember how even from outside in the hallway we could hear the religious music playing from an iPad inside the room. No matter how many times I return to these moments, I still don’t know what to make of it all. His is a tremendous outcome, one of our very best successes, a survival we did not expect and still cannot fully explain. A father is back with his family. He will feel the pride of seeing his son start college, even if remotely. But there is something bittersweet. His eyes are haunted, and he can’t sleep, and I have no idea how or when he can return to his work. His son hears sirens passing by their home on the way to a nearby hospital, and it is as if it is all starting again. As much as I want to reassure them that things will be OK, I can’t make that kind of promise.

At the start of the pandemic, it was easy to see mortality as the only outcome that mattered. It is surely the simplest to measure. Nearly six months in, we still focus on coronavirus-related mortality as an indicator that things in this country are finally getting better. But it is increasingly clear that mortality is not the full story — not for any of us. People want to be able to get back to their lives and to know what might be ahead. Yet there are still more questions than answers. We continue to learn about the long-term impacts of this virus. We don’t know the strength and duration of immunity, or even which therapies actually work to improve outcomes. We don’t know how many of those who survive severe Covid-19 return to work, to what extent lungs heal, how often patients are readmitted, the burden of psychiatric disease and the long-term consequence of isolation. We don’t know why my patient was the only one in his family to grow so sick and why he got better.

Coronavirus impact on heart symptoms: 5 signs COVID-19 has impacted your...