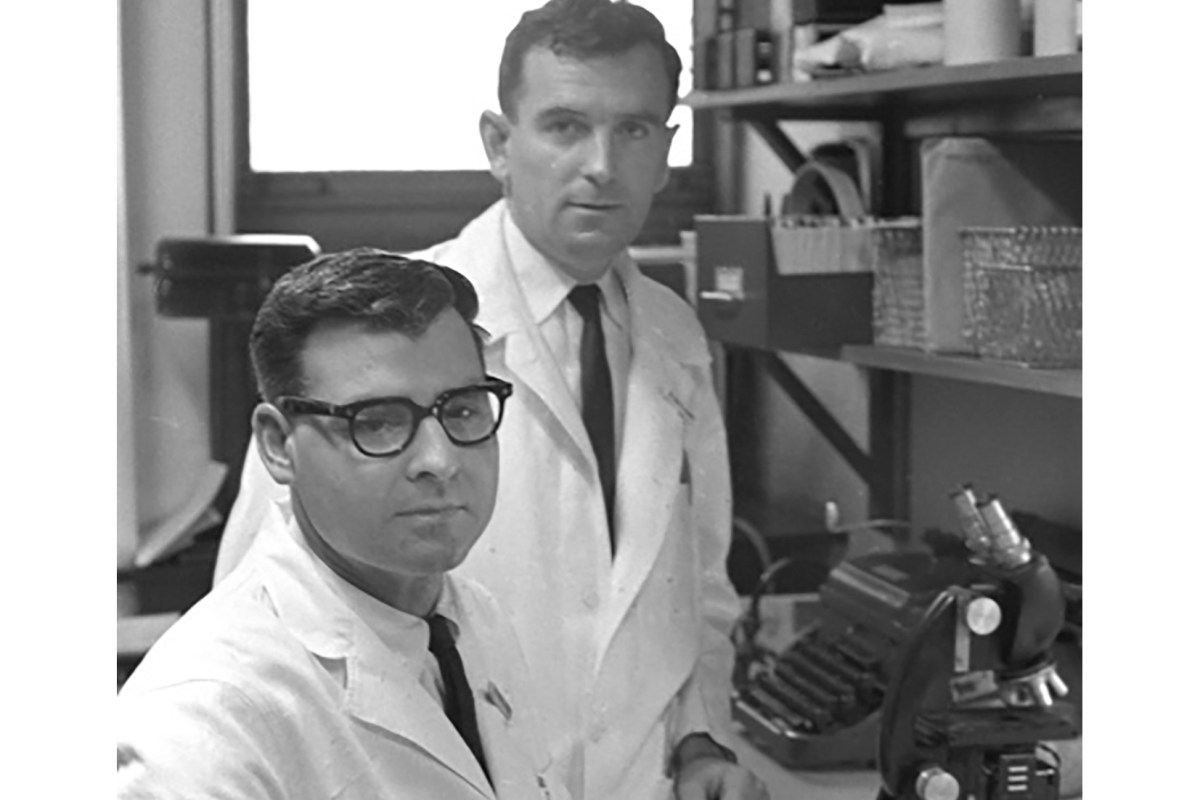 The first dose of the experimental medicine that would ultimately save millions of lives sat inside of a Styrofoam container, riding on the floor of a car weaving through New York City traffic.

The two doctors, John Gorman and Vince Freda, were on a secret mission: ferrying the dose to JFK Airport where it would be surreptitiously shipped to London.

On the customs forms, Gorman paused when asked about the contents, then finally wrote, “Human serum.”

The airline delivered it to England, where — against medical rules and regulations — it was eventually injected into its very first pregnant female patient, Gorman’s sister-in-law.

The search to find a treatment for Rh disease, also known as Rhesus disease, is told in the new book “Good Blood: A Doctor, a Donor and the Incredible Breakthrough That Saved Millions of Babies” (Abrams Press) by Julian Guthrie, out now.

In the late 1950s, more than 200,000 babies were dying each year from Rh disease — a condition in which a fetus and the mother have mismatched blood types, potentially leading to anemia or even the death of the baby. “Perhaps twice that many lived but suffered brain damage and irreversible impairments,” the author writes. The United States alone was reporting 40,000 cases of Rh disease annually.

The author says that, before learning of Gorman, she’d never heard of Rh disease.

“It dawned on me, the reason I’d never heard of it was that there is [now] a treatment that was nearly 100 percent effective,” she says.

And for that you can thank Gorman and his partner Freda. Gorman, who grew up in Australia before moving to New York City, had little bedside manner but thrived in the lab. He soon wound up at Manhattan’s Columbia Presbyterian Hospital, working on blood banking and laboratory research.

In 1959, he met Freda, a doctor and fellow blood researcher, who was lamenting having lost another baby to Rh.

The problem occurred when “a baby inherited Rh positive blood from the father, and the mom’s blood was Rh negative,” the author writes. “The mother’s antibodies, made by the immune system to fight things it didn’t want in the body, destroyed the baby’s red blood cells.”

The two doctors read every research paper they could find, went to conferences and consulted experts. But they came up empty.

That’s when Gorman had an idea. What if the body could be tricked into not producing the immune response that harmed the baby — because it thought it had already produced it?

Gorman called it the “un-vaccine,” and it worked by injecting a mother-to-be with the same antibodies (though at weaker, unharmful levels) that would normally attack a fetus, thereby causing the body not to launch its own defense.

“This was seen as truly a crazy idea,” Guthrie says.

The trial gave Gorman the confidence to test it on his own pregnant sister-in-law, Kath, whose unborn child was coincidentally likely to be harmed by Rh.

The idea to test the serum on her had come from Gorman’s father, also a doctor, who wrote “increasingly urgent” letters to his son, worrying about his daughter-in-law’s pregnancy.

“You’ve got to do something about this,” he told his son.

Shipping the medicine to London seriously bent if not broke medical rules, as only Gorman and Freda were authorized to inject it. But the pair found English doctors who were willing.

“Back in New York, John soon received a cable from [his brother], who said their ‘well-timed gamble’ was a success,” the author writes. “John sat back and smiled. He had his first nephew,” a healthy 8-pound-11-ounce redhead named Kieron Francis Gorman.

The serum ultimately allowed her to have six healthy children, which would have been impossible with her and her husband’s Rh incompatibility.

“We got the big family we wanted, the Christmases with kids all playing on the floor, with busy happy times. Can’t ask for anything more now, can we?” Kath says in the book.

After a battery of official (not sister-in-law) tests, the medicine, known as RhoGAM, was officially approved in 1968.

Today, the disease has been virtually eliminated in developed countries via the treatment that Gorman and Freda developed.

“I’m absolutely thrilled when a good idea takes off,” Gorman says in the book. “I do love ideas with consequences.”