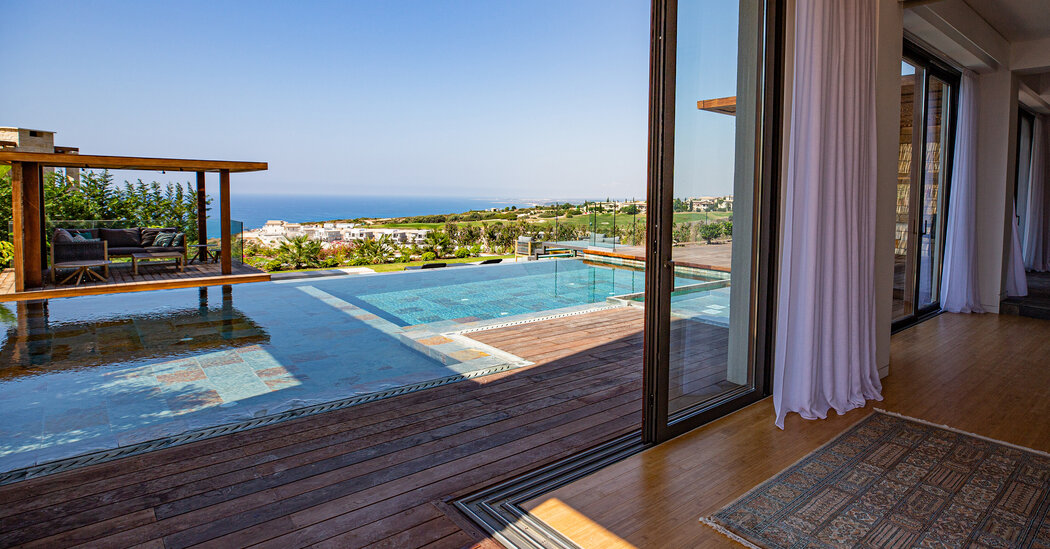 This five-bedroom hilltop villa with panoramic views of the Mediterranean Sea sits on the southwestern coast of Cyprus, near the city of Paphos.

Built in 2019 in the Aphrodite Hills Resort, the 4,800-square-foot, two-story home has a Mediterranean style with Asian motifs, and is surrounded by several decks and pools. The house sits on a third of an acre landscaped with bougainvillea, hibiscus, palm trees and cypress, said Elina Kalnina, an agent with Cular Estates, which has the listing.

A bridge over shallow pools leads to the villa’s main doors, which fold open to a landing with stairs descending to the central atrium living room and ascending to two bedrooms on the second floor. The living room, with peaked ceilings and wood floors, is flanked by an open kitchen and a study; all three spaces have floor-to-ceiling sliding glass doors that front a large deck and numerous pools with views of the Mediterranean Sea. Water features include a 66-foot lap pool, a hot tub, a swim-up bar and a “floating” pergola with bamboo walls and roof.

The open kitchen, with stone floors, wood cabinetry and an island, is adjacent to a dining area and a bathroom, and opens to a terrace for al fresco dining.

The two bedrooms on the second floor, both of which open to a covered balcony with sea views, have en suite marble bathrooms with Italian-made fittings.

The finished basement includes a gym, wine cellar and recreation room with a home theater. Two bedrooms on this level, on a small courtyard, have en suite bathrooms. There is also a studio apartment, along with a large mechanical room. The air-conditioned villa has a rooftop solar system and under-floor heating throughout, Ms. Kalnina said. There is covered parking for five vehicles, and a security system.

The 578-acre Aphrodite Hills Resort, with about 800 houses and apartments, offers many amenities, including academies for golf, tennis and horseback riding, swimming pools, hiking trails and a beach club. The community has a village square with a medical center, supermarket, hotel, shops, restaurants and bars. The popular beach on Pissouri Bay is a 15-minute drive. Minutes away is Petra tou Romiou, a legendary geological formation known as the birthplace of Aphrodite in myth. Fifteen miles northwest is the city of Paphos, a UNESCO World Heritage Site, with about 36,000 residents and an international airport. Limassol, with about 100,000 residents, is about 28 miles east.

More than a million people live on Cyprus, an island nation in the Eastern Mediterranean that was divided in 1974 after a decade of violence between Greek and Turkish Cypriots. While the island is internationally recognized as the Republic of Cyprus, the northern third is occupied and administered by Turkish Cypriots and recognized only by Turkey.

Interest in purchasing properties in the northern portion of Cyprus has grown in recent years, though many foreigners prefer the security of buying in the south, brokers said. The Aphrodite Hills Resort is on the southern part of the island, where in some cities, Paphos and Limassol among them, foreigners constitute as much as 75 percent of the market.

After prices declined by about 30 percent in the wake of the global recession and the subsequent collapse of its offshore banking system, Cyprus’s housing market was experiencing a recovery in the three years leading up to 2020, said Mike Braunholtz, sales director with the agency Prestige Property Group.

“The last few years, there’s been an increasing amount of interest because Cyprus is warm all year round, it has many fantastic beaches, the properties are amazing, and basically compared to other popular areas like Spain’s Costa del Sol and Costa Blanca, a comparable property in Cyprus would be half the price,” he said.

“That was the biggest year of sales since 2008,” he said. “So the market was regaining significant traction in the last few years, but then of course Covid-19 has come and has decimated the market.”

During the first half of 2020, when Cyprus instituted a lockdown for about two months starting in mid-March, property sales fell by more than 41 percent year over year to 3,271 units. Though restrictions have since been eased, they remain on visitors based on their country of origin, according to Cyprus Flight Pass, a government portal for travelers.

Tourism is the main driver of Cyprus’s economy. According to data collected by the European Commission, economic growth slowed considerably in the first quarter of 2020, with tourist arrivals and revenues falling by 46.5 percent and 52.4 percent, respectively. (As of Sept. 1, Cyprus had reported 1,488 cases of Covid-19 and 20 deaths, according to the New York Times’s coronavirus map.)

The lockdown and travel restrictions have hobbled development on the island, said Michael Chambers, the senior partner of Michael Chambers & Co., a law firm based in Limassol.

“Prior to the pandemic, important projects were underway, especially in Limassol, which attracted the interest of large investors and foreign buyers,” Mr. Chambers said. “Unfortunately, the pandemic paralyzed these projects for about two months, creating a time delay. The near future seems uncertain for the real estate sector in Cyprus.”

However, the factors driving market booms elsewhere in Europe, such as France, may eventually make an impact on Cyprus, Mr. Braunholtz said. “Money is very cheap right now, everyone wants to leave the city, and everyone can work from home anywhere,” he said. “So those are three driving forces at the moment making the market go, and I hope those factors will bring the Cypriot property market back to life in 2021.”

Home prices on Cyprus remain affordable, particularly in comparison to popular second-home areas such as Marbella, Spain, or the Algarve in Portugal. “A sort of mass-produced villa in Spain or Portugal would be about 400,000 or 450,000 euros ($475,000 to $535,000), which would be probably twice the price of a comparable villa in Paphos,” Mr. Braunholtz said.

Who Buys in Cyprus

A former British colony, Cyprus once attracted many British buyers, but their numbers dwindled significantly during the housing crisis from 2009 to 2016. When Cyprus joined the European Union in 2004, those buyers were supplanted by Russians seeking residency permits, agents said.

Mr. Braunholtz said inquiries from British buyers were rising again before the pandemic. “They’re definitely back,” he said. “Over the last four years, interest was growing again, but we’ll have to see how the market is affected by Covid.”

There were also many German buyers, along with some from Scandinavian countries, said Louis Constantinou, a real estate agent with Africanos Estates.

Ms. Kalnina said that, aside from Russians, she has handled buyers from Israel and the United Arab Emirates, along with some from China, Ukraine and South Africa.

There are some restrictions on home purchases on Cyprus. While European Union citizens with residency in the southern part of Cyprus can purchase unlimited properties there, others are limited to one apartment, house or plot, Mr. Chambers said.

In northern Cyprus, the limit is four properties, he said. However, buyers wishing to purchase a home there “must confirm in advance that it actually belongs to the seller and not to a Greek Cypriot, because they may be exposed to criminal liability due to the political situation in Cyprus.”

Buyers across Cyprus should also confirm that a property is free of any charges, mortgages or other encumbrances with the provincial land registry, brokers said.

“You really need to get something called the land search certificate from the Land Registry,” Mr. Braunholtz said. “A property developer will take out a mortgage, build some houses and have a big loan, and the debt goes with the title, and you’d end up owning the debt if you’re not careful.”

Stamp duties range from 3 percent to 8 percent, depending on the property’s sale price, Mr. Constantinou said.

Typically, the seller pays the real estate commission of about 5 percent, brokers said.

Property taxes in Cyprus were abolished in 2017.

It’s the Winter of Backcountry. Here’s How to Start Safely.

Crisscrossing the Country on Highways Big and Small