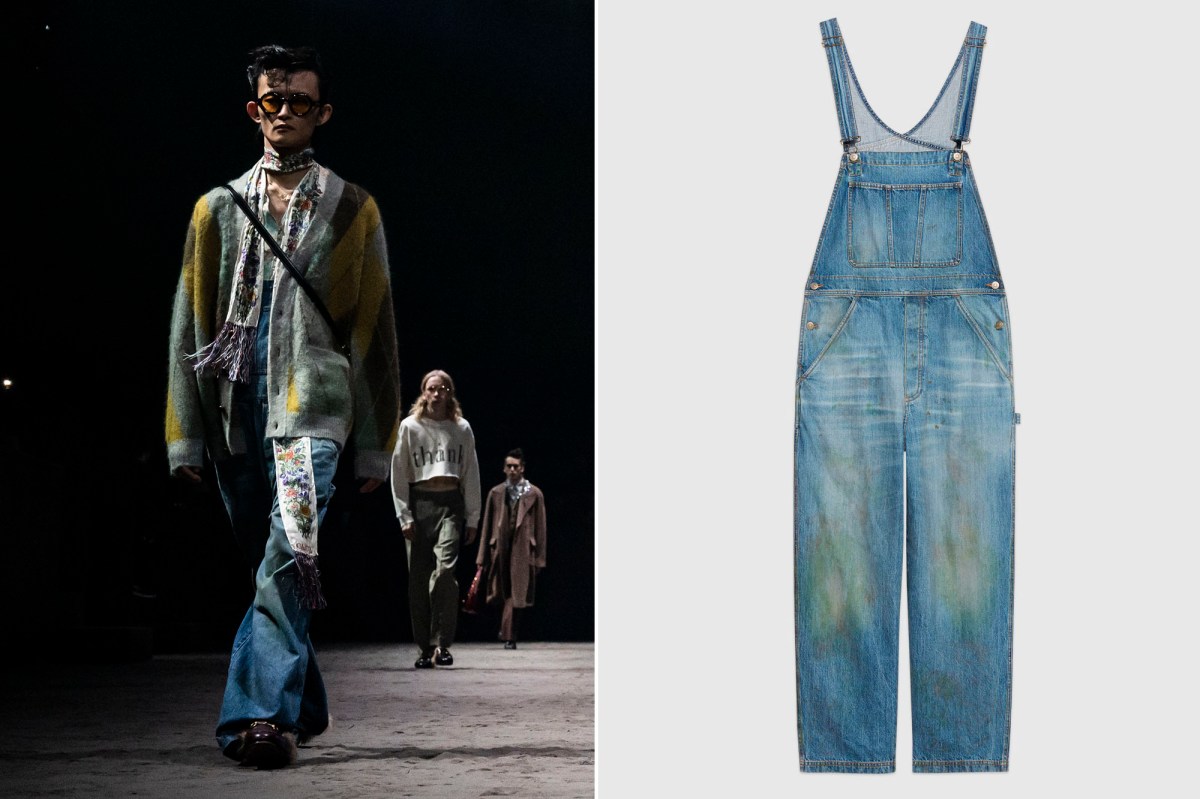 These overalls are a haute mess.

Luxury brand Gucci is selling strategically stained denim overalls for a whopping $1,400 — perfect for poseurs who want to look rugged but are really just rich.

“This denim overall is crafted from organic cotton and specifically treated for a stained-like, distressed effect,” reads the description of the dirty dungarees, which debuted on the runway as part of a grunge-inspired collection back in January and are now available in stores and online.

And even though the splotchy streaks probably aren’t real grass stains, the brand is keen to point out that the piece is being made with our good green earth in mind.

“It is produced through cultivation and manufacturing processes that don’t involve harmful chemicals, pesticides or artificial fertilizers,” a description on Gucci.com reads.

But real farmers think these fancy pants should be put out to pasture.

“For [that much money], I’m thinking, ‘What’s the equivalent of that in second-cut hay bales?’ That’s the currency I’m most interested in,” farmer Lauren Gitlin, 40, told The Post.

Although the former New Yorker, who runs Vermont dairy farm Villa Villekulla, said her biggest sartorial splurge was a pair of insulated Carhartt overalls (which start at about $70), she’d know just what to do with the Gucci set.

“If I got a pair of those, I would put them on eBay and use the money to buy grain or dairy equipment,” she said. “That money isn’t easy to come by when you’re a farmer.”

What’s more, the stain placement isn’t even on point.

“I think a forensic expert should be called in. It looks low down on the leg. Grass stains are more knee-centric,” she said, adding, “If Gucci really wants them to look authentic, they should add s - - t smears as well.”

The grubby onesie isn’t the only dirt-laden design in Gucci’s most recent men’s collection: A pair of eco washed organic denim pants will run buyers $769 and sport the same faded knees.

If stains aren’t your style but you’d still like to pay a premium to look sloppy, you can also get a wool sweater speckled with mothball-style “intentional tears” for just $577. Holey crap!

Gucci did not immediately return The Post’s request for comment.