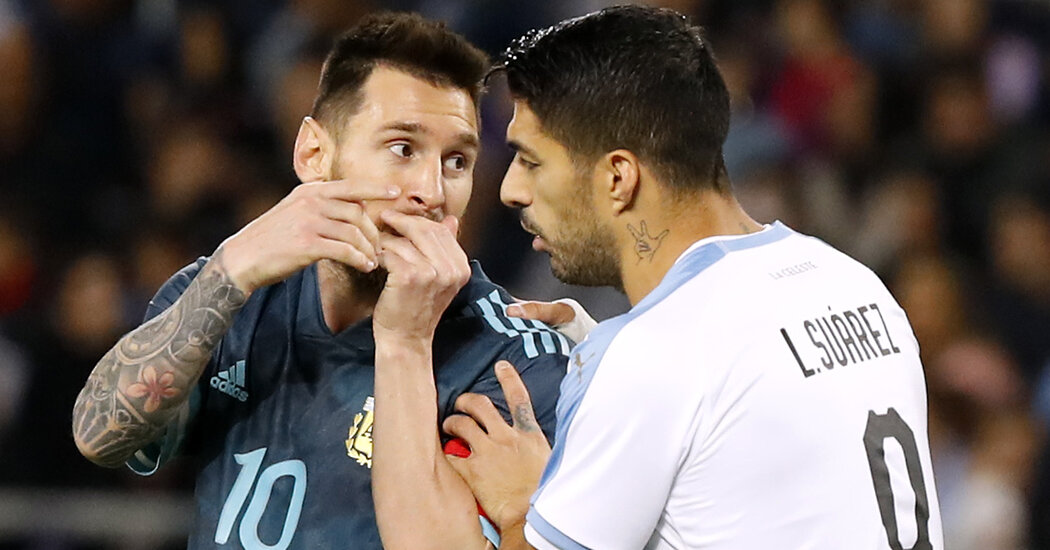 After weeks of indecision and discussion, FIFA is planning to order soccer clubs to release players who have been called up for World Cup qualification games next week, a move that is likely to lead to a furious backlash from teams, leagues and player unions fearful of the risks of international travel during the coronavirus pandemic.

The FIFA demand will come after weeks of unsuccessful talks to find a compromise that addresses concerns about committing players to intercontinental travel amid a global rise in virus cases, and will apply most notably to South American national teams eager to recall their overseas-based players for the first round of qualifying matches for the 2022 World Cup.

In a meeting last week, an alliance of leagues, Europe’s top club association and the global players union FIFPro pressed FIFA to relax its rules on player release for next month’s games, which will take place on Oct. 8 through Oct. 13.

FIFA, according to three people with knowledge of the matter, plans to accede to demands that players not be compelled to play in exhibition or friendly matches, but it will enforce release requirements for the first round of South America’s World Cup qualification games and for matches in Europe’s Nations League. The decision will require clubs to release dozens of European- and North American-based athletes as soon as this weekend for what their teams and unions argue are risky trips that could force them — because of quarantine rules — to miss club games once they return.

The dispute also could set the scene for a major confrontation between FIFA and the wealthy clubs that employ the world’s best players. Clubs and leagues have long chafed about having little say over the release for national team action of players whom they spend millions of dollars to employ.

Major League Soccer and some of its teams on Friday became the first group to write to federations in South America to say they would not release players for the games, saying quarantine requirements in the United States and concerns about testing procedures elsewhere meant they were within their rights to block requests for players to join their national teams.

“While we understand that players and staff will undergo testing and screening, we do not believe it is medically possible to determine the COVID-19 status of the player’s teammates, coaches and technical staff given the timing of the travel, training and match dates,” read one of the letters from M.L.S. reviewed by The Times. In it, the league said it “was not prepared to release” the player, Paraguay’s Alejandro Romero, who is known as Kaku.

Conmebol, the regional body for South American soccer, wrote to FIFA that same day, urging it to enforce its rules. Its letter, signed by Conmebol’s president, Alejandro Dominguez, insisted that any failure to do so would impact on the sporting integrity of its qualification campaign. In the letter, Dominguez demanded that FIFA issue sanctions for any breach.

Under its laws, FIFA can bar a player from playing club soccer for five days after the end of the international release window if a legitimate request is ignored. It also can open disciplinary procedures against the player’s club, which would typically result in a fine. The head of the global players union said FIFA’s decision would push players into an untenable position next week, forcing them either to set aside their personal health concerns or risk punishment.

“The reality is we are in the middle of a pandemic, and the prospect that a player could be sanctioned for taking a decision based on his consideration of what is safe for them is completely wrong,” said Jonas Baer-Hoffmann, the general secretary of FIFPro, a global players union. FIFPro, along with groups like the World Leagues Forum and the European Club Association, a lobby group for top teams in Europe, had been in talks with FIFA about the October window.

In the past, players and clubs have skirted the release rules by claiming minor injuries just before an international window. Many now expect a rash of such diagnoses over the next week.

A study by FIFPro showed the biggest impact of the FIFA rule would be borne by teams in North America and Europe. In all but one case — that of Bolivia — the majority of players on South American national team rosters are based overseas. Once FIFA issues its ruling, the first players will be required to travel starting Sunday, though there are no uniform protocols in place to safeguard their health.

Current proposals being considered by FIFA for the October games will require a minimum test turnaround of 72 hours. That is looser than the 48-hour requirement it had for games played in Europe in September, and could expose players to greater risks of contracting the virus while they wait for results.

And while FIFA is moving to enforce its rules for the World Cup qualifiers, it will simultaneously ease the obligation for exhibition games. That decision, while welcomed, has led to confusion about the “health first” mantra FIFA has repeated throughout the pandemic; critics of the strict adherence to the rule for qualifiers noted that the risks of contracting the virus remain unchanged regardless of the stakes of the match.

The global pandemic has already upended the soccer calendar, forcing adjustments to schedules and postponements of both World Cup qualifiers and international and regional championships. But South America has remained resolute, insisting its games take place.

Failure to do so could result in the loss of millions of dollars in television revenue for the continent’s national soccer federations, but players are already feeling the consequences. A recent outbreak among players on Brazil’s top team, Flamengo, led to 16 players being forced out of action and placed in isolation.