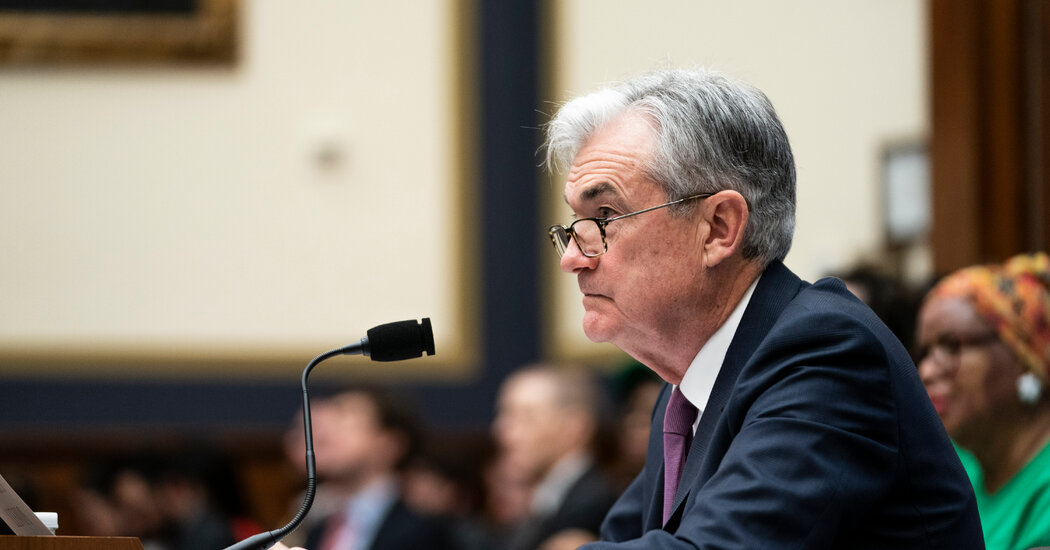 Treasury Secretary Steven Mnuchin offered an upbeat view of the economic recovery on Tuesday, describing it during a congressional hearing as the fastest rebound from any crisis in American history.

Yet Mr. Mnuchin acknowledged that more than half of the jobs that had been lost as a result of the pandemic had yet to be restored.

His comments came in a joint appearance before the House Financial Services Committee with Jerome H. Powell, the chair of the Federal Reserve.

Both officials projected optimism about the economic recovery so far, but Mr. Powell made clear that many of those gains were predicated on strong fiscal support, including additional jobless benefits and stimulus checks. That economic support has largely run out and lawmakers show little indication of being able to agree on another package despite the fact that millions of people remain out of work.

Mr. Powell told Congress that the economy had made meaningful progress but that the outlook was uncertain and policymakers will need to do more.

“Many economic indicators show marked improvement,” Mr. Powell said in his testimony, crediting policies like expanded unemployment insurance, which expired at the end of July. “Both employment and overall economic activity, however, remain well below their pre-pandemic levels, and the path ahead continues to be highly uncertain.”

But Mr. Powell said the path forward would depend on virus control and “policy actions taken at all levels of government.”

“A big part of the good economic news that we have had results from the fiscal support that came with the CARES Act,” Mr. Powell said, crediting the stimulus package for fueling consumption and helping business confidence.

Asked what would happen if no additional stimulus was forthcoming, Mr. Powell said “we don’t really know what will happen” but said there are risks, including if people begin to run through the savings they have accumulated in recent months, partly as a result of the first fiscal package.

Mr. Mnuchin projected “tremendous” economic growth in the third quarter, noting increases in business activity, manufacturing and the housing market. He said that the 8.4 percent jobless rate was a “notable achievement” considering his own projections earlier this year that unemployment could hit 25 percent.

Nonetheless, Mr. Mnuchin said that more stimulus was needed and that he would continue working with Congress to strike a deal.

“The president and I remain committed to providing support for American workers and businesses,” Mr. Mnuchin said. “I believe a targeted package is still needed, and the administration is ready to reach a bipartisan agreement.”

Mr. Powell also addressed the Main Street lending program, an effort to make loans to midsize businesses that is supported by congressional funding appropriated to the Treasury Department. The Fed and the Treasury have faced criticism for the effort, which is structured in a fairly risk-averse way and which is using hardly any of its $600 billion in capacity.

The program has made or is in the process of making about 230 loans totaling roughly $2 billion, according to Mr. Powell’s statement. But he stressed the limits of loan programs and suggest that congressional spending might be more appropriate in some instances.

Under questioning from Representative Maxine Waters, the committee chair, about whether the program could be broadened to help more companies, Mr. Mnuchin said there were limits to what could be done with the existing funds that were created to backstop the Fed facilities. But Mr. Mnuchin said that he would like to see legislation that would “reallocate that money to better use.”

Brookfield Properties, the real estate company that operates more than 170 retail properties in the United States, plans to cut 20 percent of employees in its retail division, according to a memo distributed to staff on Monday, as the pandemic continues to wreak havoc on shopping centers.

“All our constituents — retailers, lenders, communities, partners, investors, consumers, vendors, shareholders and our own employees — have been affected by the events of this year and forced to revisit their relationships with our industry and our company,” Jared Shupaila, the head of the company’s retail group, said in the memo, which was obtained by The New York Times.

“While many companies were quick to implement furloughs and layoffs at the onset of the pandemic, we made the conscious decision to keep all our team employed while we gained a better understanding of its longer-term impact on our company,” he wrote.

The unit has more than 2,000 employees, according to a spokeswoman for Brookfield Properties, who declined to comment further on the memo. The layoffs will affect people who work at Brookfield Properties’ corporate headquarters and in malls. Brookfield has recently been involved in deals to buy bankrupt retailers, including J.C. Penney and Forever 21.

CNBC first reported on the cuts on Tuesday.

Deutsche Bank, under intense pressure to cut costs, said Tuesday it would close one-fifth of its domestic branches after the pandemic helped persuade tech-averse Germans to switch to online banking.

Germans are notoriously suspicious of electronic banking. Two-thirds of all consumer transactions are made with cash, according to a 2019 report by the consulting firm McKinsey & Company. But the pandemic forced Germans to get friendly with banking online, emboldening Deutsche Bank to close 100 out of 500 branches as part of a broader effort to cut costs and improve its chronically weak profits.

The branch closures were first reported by Reuters.

Shuttering the branches will lead to an unspecified number of job losses, a Deutsche Bank spokesman said, but would not raise the overall total of 18,000 job cuts the bank had previously announced.

The switch to more electronic banking could also help Deutsche Bank deal with another problem: money laundering. Electronic transactions are much easier to trace than cash.

Along with JPMorgan Chase, Citigroup and Bank of America, Deutsche Bank was among the big international lenders whose regulatory filings indicated they had helped move trillions of dollars of dirty money, according to documents obtained by BuzzFeed News and shared with a worldwide consortium of journalists.

Deutsche Bank said in a statement that the problems reported to BuzzFeed were already well known to regulators and it was working to change its ways. “We have devoted significant resources to strengthening our controls and we are extremely focused on meeting our responsibilities and obligations,” the bank said.

Tesla is expected to outline advances in battery technology and announce new production plans on Tuesday as part of its annual general meeting and a “Battery Day” presentation much anticipated by the carmaker’s fans.

In a message on Twitter, the company’s chief executive, Elon Musk, said the battery strategy “affects long-term production” of its vehicles, especially three vehicles not yet introduced — a semi truck, a pickup known as the Cybertruck and a two-seat roadster.

Mr. Musk also appeared to temper expectations for an immediate effect on Tesla’s business, saying that what the company will announce “will not reach serious high-volume production until 2022.” Tesla’s stock fell about 4 percent on Tuesday.

He also said Tesla would increase purchases of battery cells from Panasonic, LG and CATL, a Chinese battery maker. But he hinted that Tesla had new manufacturing goals of its own. “Even with our cell suppliers going at maximum speed, we still foresee significant shortages in 2022 and beyond unless we also take action ourselves,” he wrote.

The events on Tuesday in Fremont, Calif., will begin after the close of Wall Street trading. Because of the pandemic, the meeting and presentation will be available mostly to an online audience, though the company said “a very limited number of stockholders,” determined by a drawing, would be allowed to attend in person.

Tesla offers models that can go 350 miles or more on a single charge, while many competitors fall short of that range. Audi’s e-tron electric sport utility vehicle and the Chevrolet Bolt, made by General Motors, go about 200 to 250 miles on a charge.

But many companies are racing to catch or pass Tesla. A start-up company, Lucid Motors, has said it plans to offer a car next year that can exceed 500 miles on a charge.

Mr. Musk has often outlined ambitious plans that failed to unfold as described. Last year, he said one million Teslas would be operating in the United States this summer as driverless taxis. But the company has not yet demonstrated a car capable of operating without a driver.

Entry of Tesla in India doesn’t worry us: Mercedes-Benz – Times of India