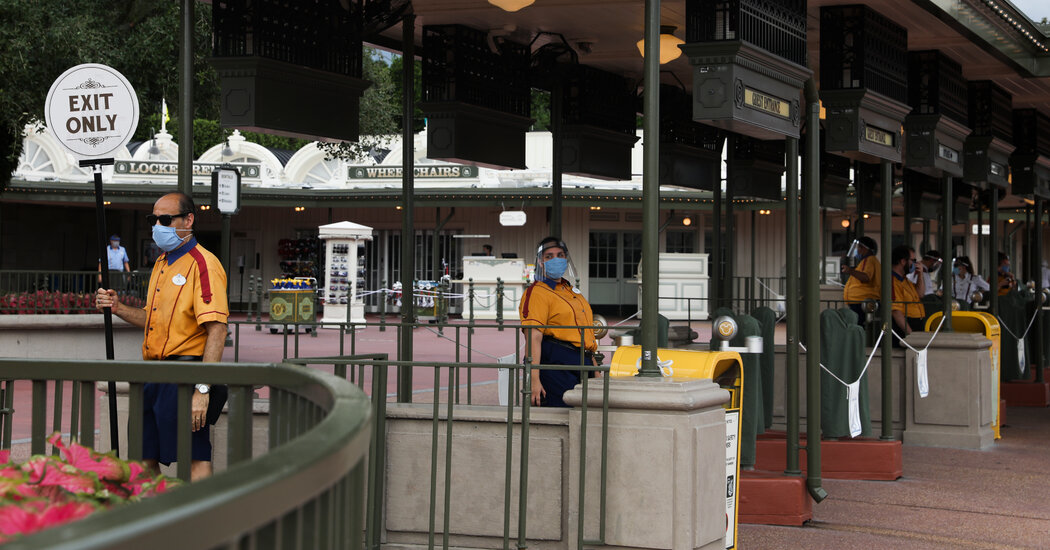 For six months, Disney has kept tens of thousands of theme park workers on furlough with full health-care benefits in hopes that a light at the end of the pandemic tunnel would appear. On Tuesday, Disney conceded that none was coming.

The company said it would eliminate 28,000 theme park jobs in the United States, or about 25 percent of its resort work force.

“As heartbreaking as it is to take this action, this is the only feasible option we have in light of the prolonged impact of Covid-19 on our business, including limited capacity due to physical distancing requirements and the continued uncertainty regarding the duration of the pandemic,” Josh D’Amaro, chairman of Disney Parks, Experiences and Products, said in an email to “cast members,” which is how Disney refers to theme park workers.

About 67 percent of the layoffs will involve part-time jobs that pay by the hour. However, executives and salaried workers will among the laid off.

Disneyland in California has remained closed because Governor Gavin Newsom has refused to allow theme parks in the state to restart operations. About 31,000 people work at the Disneyland complex and the majority are unionized and have been furloughed.

Mr. D’Amaro said in a statement that the layoffs were “exacerbated in California by the state’s unwillingness to lift restrictions that would allow Disneyland to reopen.”

Walt Disney World in Florida reopened on a limited basis in mid-July. But attendance has been weaker than Disney expected, with concern about coronavirus safety a major factor.

Disney will now begin negotiations with unions that represent the bulk of the affected employees. About 20,000 unionized Disney workers have been called back to work at Disney World. Roughly 20,000 more remain on furlough, which began in mid-April. Disney World employed more than 70,000 workers before the pandemic.

JPMorgan Chase has agreed to pay close to $1 billion as part of settlements to resolve charges that it had manipulated markets for U.S. government bonds and precious metals.

The settlements announced on Tuesday — which include a deferred prosecution agreement with the Justice Department — stem from charges that JPMorgan bankers placed artificial orders for futures contracts.

Over an eight-year period ending in 2016, the government alleged, JPMorgan traders placed tens of thousands of orders to buy or sell futures contracts for precious metals like gold, silver and palladium in an attempt to shift market prices and add to their profits or avert losses. But before those orders could be filled, the JPMorgan traders would cancel them, a form of illicit behavior known as “spoofing.”

JPMorgan agreed to pay the Commodity Futures Trading Commission $920 million — a record for the regulator — in penalties, disgorgement of ill-gotten gains, and restitution to wronged parties.

As part of a related Securities and Exchange Commission settlement, JPMorgan’s brokerage unit admitted that its traders had engaged in manipulative Treasury product trading in 2015 and early 2016 and agreed to pay $35 million.

As part of the deferred prosecution agreement, JPMorgan acknowledged the facts laid out by the government. In a statement, Daniel Pinto, the head of JPMorgan’s corporate and investment bank, called the conduct of the people involved in the scheme “unacceptable.”

Two former traders on the bank’s precious metals desk have already pleaded guilty to spoofing charges. And late last year, four other former metals-desk employees were indicted on charges of participating in a racketeering conspiracy.

Just after Amazon said on Monday that its annual Prime Day shopping event would be held on Oct. 13 and 14, Target announced that it would hold a similar event called Target Deal Days on the same dates.

Walmart then said that its own version of a deals bonanza called the “Big Save Event,” which will run from Oct. 11 to Oct. 15.

Major retailers were already outlining plans to kick off holiday deals online in October, as the pandemic causes skittishness around shopping in stores and uncertainty swirls around the reliability of shipping timelines. Amazon, which had postponed its Prime Day from July, is now holding its sale just when other chains planned to jump in, potentially spurring a bout of holiday shopping one month earlier than other years.

The Centers for Disease Control and Prevention recently released guidelines for minimizing exposure to the coronavirus during Thanksgiving sales. Lower risk activities include shopping “online rather than in person on the day after Thanksgiving,” the C.D.C. said, adding that “going shopping in crowded stores just before, on, or after Thanksgiving” carried a higher risk of exposure.

Bank loan officers told the Federal Reserve that program terms — and concerns about the financial state of borrowers — have kept them from extending credit through the government’s pandemic loan program for midsize businesses.

As part of its March economic relief package, Congress gave the Treasury $454 billion to support the Fed’s emergency lending programs. Lawmakers had created a forgivable loan program for small businesses, but the Fed and the Treasury were supposed to help businesses that were too big for that small-business program but too tiny to raise money by issuing bonds.

The solution the partners came up with — the so-called Main Street lending program — has seen relatively little takeup, using less than $2 billion of its $600 billion capacity so far. The program’s unpopularity, which has drawn frequent criticism from Capitol Hill, is owed partly to the fact that banks can issue loans without Fed support, and partly to the way the program is designed.

Banks retain a 5 percent slice of any loan they make through the Main Street program, while selling 95 percent to the Fed, so banks retain some risk themselves. The program also comes with reporting requirements and other restrictions — including limitations on executive pay and capital distributions, like dividends, that Congress set out in the relief legislation.

“Registered banks often cited concerns about borrowers’ financial condition before and during the COVID-19 crisis, as well as overly restrictive” terms to explain why they had not made more loans, according to a supplementary Senior Loan Officer Opinion Survey the Fed released Tuesday.

Banks that have not chosen to register noted unattractive loan terms, and said that they were making loans without help from the program.

The Fed has repeatedly pointed out that it can only make loans, not grants, which is what many hard-hit borrowers need. The central bank also shares decisions about design and credit risk with the Treasury Department, which has at times been averse to losses.

The Main Street program isn’t “exactly a backstop,” Randal K. Quarles, the Fed’s vice chair for supervision, said at an event Tuesday, noting that low interest could be owed to either the program’s design or bank’s capacity to lend. He noted that the program would be available as a backup option if conditions worsened this autumn.

Spain’s national court on Tuesday acquitted the former chairman of Bankia, Rodrigo Rato, and other executives of falsifying the bank’s accounts as part of an initial public offering in 2011, only a year before Bankia’s near-collapse forced Spain to negotiate a European banking bailout.

Mr. Rato, who is also a former managing director of the International Monetary Fund, was one of 34 defendants who were cleared of criminal charges of fraud and misleading shareholders during the initial public offering. The court ruled that the stock listing had been “intensely supervised” by regulators, including the Bank of Spain, and that investors had been given sufficient information in the I.P.O. prospectus.

Public prosecutors had sought to sentence Mr. Rato to eight and a half years in prison for overseeing the stock listing, which turned out to be the prelude to the largest loss in Spanish corporate history. The following year, Bankia reported a loss of 19.2 billion euros (about $22.5 billion), which then forced the government to nationalize the bank and grant Bankia about half of Spain’s €41 billion banking bailout.

Although he was cleared of wrongdoing on Tuesday, Mr. Rato has been in prison for a separate corruption case. In 2017, he and other executives were sentenced for making a fraudulent usage of their corporate credit cards, on a combined €12.5 million worth of personal purchases ranging from restaurant meals to travel and golf expenses.

The pandemic has been brutal on many working mothers, especially those with little leverage on the job. Experts say it may be unforgiving for mothers in so-called up-or-out fields — like faculty members facing an all-or-nothing tenure evaluation.

The loss of months or more of productivity to additional child care responsibilities, which fall more heavily on women, can reverberate throughout their careers.

Kimberly Marion Suiseeya, a political-science professor at Northwestern University, saw her work life upended when her third grader’s school shut down in March. Later, she was demoralized to learn that local schools would not reopen this fall.

Dr. Marion Suiseeya, who is completing a book that she considers critical to her tenure prospects — about the injustices facing people who live in forests — estimates that she was two months from finishing the manuscript in March, but that it will take her at least four more months to finish now.

“I’m literally working in a closet,” she said. “My daughter has different perceptions. She thinks all I do is work. But I work a lot less.”

Northwestern, like other universities, initially responded to the pandemic by pausing the so-called tenure clocks of junior faculty members, giving them an extra year to publish academic work that would help them earn the promotion.

But research has shown that stopping the tenure clock is an imperfect policy. Jenna Stearns, an economist at the University of California, Davis, and co-author of a paper on tenure decisions, said men appeared to devote more of the additional year to academic research, while women appeared to spend more of it managing parental obligations.

Kathleen Hagerty, Northwestern’s provost, said there was always a trade-off between blanket policies like the tenure-clock extension, which she conceded could have inequitable effects, and more tailored accommodations that put the onus on employees to arrange them.

Australia, the world’s second-largest exporter of coal, has also quietly become a renewable energy powerhouse thanks to the country’s homeowners.

Many Australians who have embraced solar are responding to incentives offered by state governments in the absence of a coordinated federal approach, a sharp drop in the price of solar panels in recent years and an increase in electricity rates.

The uptake has been especially high in Queensland, which makes up a big chunk of the country’s northeast and includes Cairns and Brisbane. The state has hot, humid weather similar to Florida’s and also calls itself the Sunshine State.

Even politically conservative homeowners have also embraced solar to become less reliant on the electricity grid in keeping with the high value many Australians place on rugged individualism.

Peter Row of Bundaberg, a city just over 200 miles north of Brisbane that had the most rooftop solar installations last year in Australia, bought a typical 6.57-kilowatt system for his home after he grew tired of his rising electricity bill.

Mr. Row believes the climate is changing but, like many other conservatives, isn’t sure how much of the change is caused by humans, he said. “I don’t think renewables are the total answer yet,” he said.

Left slams RBI proposal to give banking licences to corporates