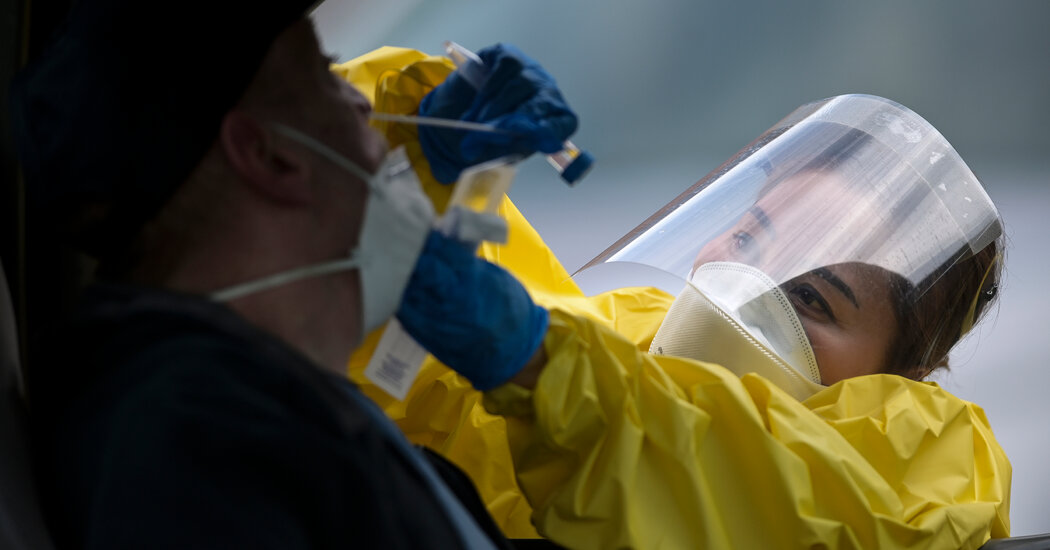 A coronavirus survey in Minnesota was stopped after multiple cases of residents “intimidating and shouting racial and ethnic slurs” at public health workers who had been going door to door, the state Department of Health said.

In an episode in Eitzen, Minn., a city of 250 people about 170 miles southeast of Minneapolis along the border with Iowa, a team of workers was “surrounded by three men who refused to accept their identification as public health workers,” Dan Huff, an assistant commissioner at the Minnesota Health Department, said in a statement.

One of the men was armed and the men used “racial epithets” during the confrontation, he said.

“The workers felt that the intention of the men was to intimidate them,” Mr. Huff said.

He said there was a “series of troubling incidents across Minnesota,” including ones in which residents followed and videotaped workers and threatened to call the police on them.

Two workers usually were on each team, with no more than 15 teams in the field at a time, a department spokeswoman said.

The survey, a joint effort of the Minnesota Department of Health and the Centers for Disease Control and Prevention, aimed to improve epidemiologists’ understanding of how the coronavirus was spreading in the state.

Cases have risen to record levels in the state, according to a New York Times database. The number of new cases per day reached its highest level in Minnesota on Sunday when the state reported 1,296 new cases.

The public health workers planned to visit randomly selected households in 180 sites in rural, suburban and urban Minnesota from Sept. 14 to 30. The confrontation with the armed man happened one day after the survey started, officials said.

As part of the survey, a member of each household was asked to complete a questionnaire and anyone in the home who was interested could receive a free coronavirus or antibody test.

The mayor of Eitzen, Jeff Adamson, said that residents had been concerned at the unusual sighting of a vehicle with California license plates but denied that any confrontations in the city involved racial slurs or weapons.

Mr. Adamson said that a vehicle from a faraway state “raises suspicions in any small rural community.”

“With everything going on and child abduction,” he said, people in the city wanted to verify what the vehicle was doing there.

He said on Friday night that it was “hard to find the words” to describe his disbelief at the accusations.

The three men involved in the Sept. 15 encounter are “three outstanding citizens of the city,” Mr. Adamson said, adding that he was able to identify them because “everybody knows everybody in town.”

The men, as well as a homeowner who witnessed what happened, described the interaction as a “fairly pleasant conversation,” he said. He declined to identify the residents.

“I don’t know where the hatred is coming from on this issue, I really don’t,” he said. “It certainly isn’t coming from the City of Eitzen, Minnesota.”

In response to Mr. Adamson’s statement, the health department spokeswoman said: “When staff reported this incident to us, we took it very seriously and have no reason to doubt the details. The reports were serious enough that C.D.C. decided to recall their teams and the study was ended.”

The C.D.C. did not respond to a request for comment on Friday night.

Mr. Huff said that as isolated incidents, the interactions “could perhaps have been considered misunderstandings, but over the past week, a pattern emerged.”

In parts of rural Minnesota, some residents have scoffed at coronavirus protocols, such as a statewide mandate to wear a mask.

“There is a difference,” Mr. Huff said, “between disagreeing with a policy and taking out frustrations on a public health worker who is trying to do their job and help the community as best they can.”

Mr. Adamson said residents were not angry about coronavirus restrictions but had largely been going “about their own daily business,” including “social gatherings.”

Martinus Veltman, Who Made Key Contribution in Physics, Dies at 89

Egypt Denied an Oxygen Failure Killed Covid Patients. We Found That It Did.