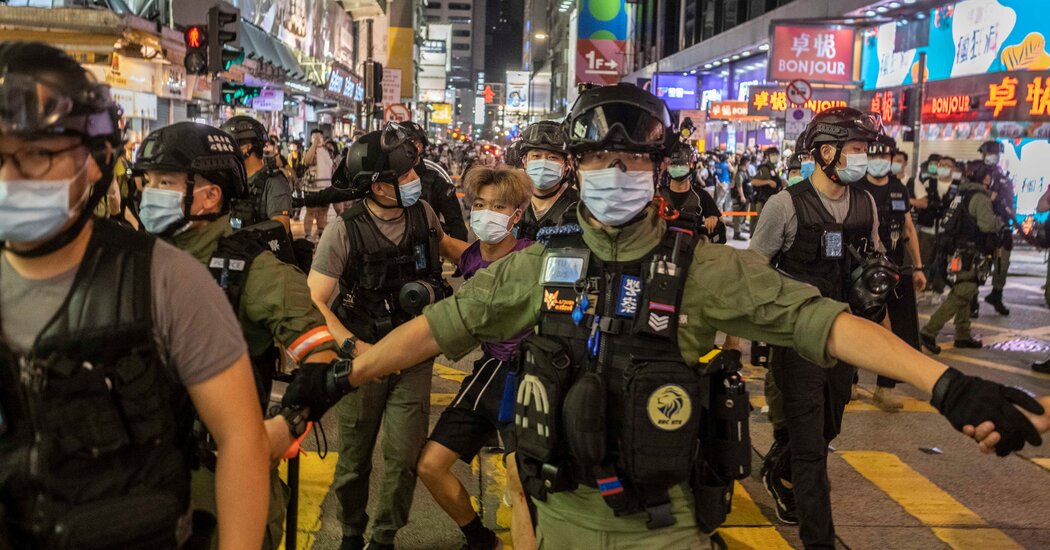 HONG KONG — The United States is warning citizens of the risk of arbitrary “police and security power” in Hong Kong and urging Americans to reconsider travel to the city now that the Chinese government has imposed a sweeping security law there.

The advisory, which was posted on the State Department’s website on Monday, is unlikely to have much of an immediate effect on travel, as entry into Hong Kong is already tightly restricted by coronavirus control measures. But it could further fray ties between the United States and China.

The State Department advisory warned that the security law, which came into force in June, could subject Americans who have been publicly critical of China “to a heightened risk of arrest, detention, expulsion, or prosecution.”

The security law targets what it deems acts of secession, subversion, terrorism and collusion with foreign elements, but critics say the broad wording also gives the authorities wide-ranging powers to target voices of dissent. Dozens of people in Hong Kong have already been arrested under the law, including Jimmy Lai, a prominent pro-democracy media tycoon.

The State Department has previously warned about the risk of arbitrary detention in mainland China and about the use of exit bans that cannot be readily challenged in court to keep Americans in the country.

Hong Kong, a semiautonomous territory of China, has its own legal system that is more independent and transparent than the Communist Party-controlled courts in the mainland. But the U.S. travel advisory suggests the risk of arbitrary enforcement is increasing in Hong Kong as well.

Americans traveling in mainland China or Hong Kong “may be detained without access to U.S. consular services or information about their alleged crime,” the advisory said. “U.S. citizens may be subjected to prolonged interrogations and extended detention without due process of law.”

Wang Wenbin, a spokesman for the Chinese Ministry of Foreign Affairs, criticized the new travel warning on Tuesday, saying China was one of the safest places on earth and the mainland had recorded no local transmission of the coronavirus for a month.

The United States has penalized Hong Kong and Chinese officials, and Beijing has responded with similar measures against American lawmakers and heads of nongovernmental organizations.

The warning on Hong Kong came as the United States improved its assessment of the coronavirus risk in China, where the spread of the virus is largely controlled, by changing its advisory level to “reconsider travel” from “do not travel.”

Disneyland as a Vaccination Site? Airports as Test Centers? The Travel Industry Pitches In

Traveling (or Returning) to the U.S.? Prepare to Take a Coronavirus Test

House Hunting in Estonia: A 19th-Century Manor With Modern Style