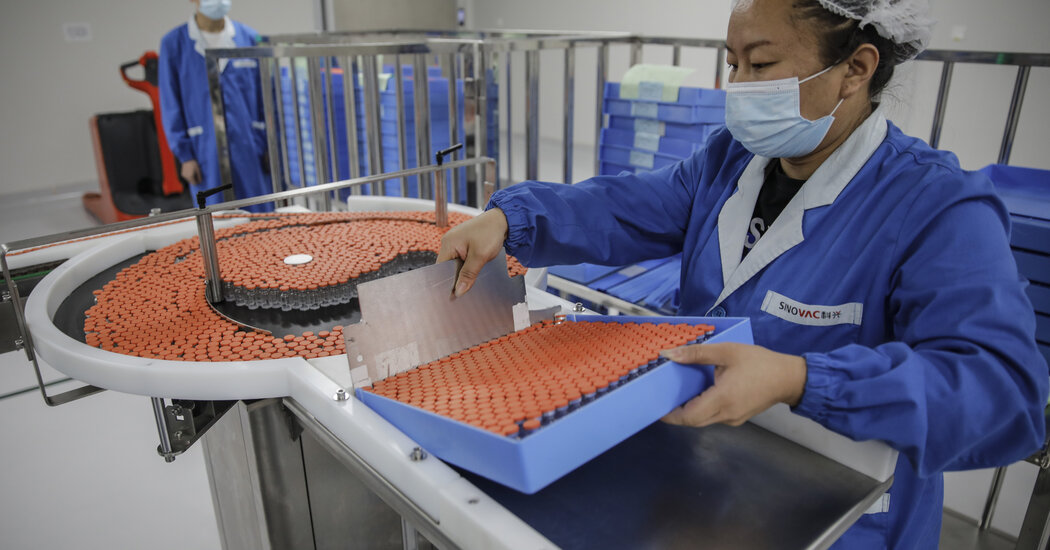 First, workers at state-owned companies got dosed. Then government officials and vaccine company staff. Up next: teachers, supermarket employees and people traveling to risky areas abroad.

The world still lacks a proven coronavirus vaccine, but that has not stopped Chinese officials from trying to inoculate tens of thousands, if not hundreds of thousands, of people anyway. Three vaccine candidates are being injected into workers whom the government considers essential, along with many others, including employees of the pharmaceutical firms themselves.

Officials are laying out plans to give shots to even more people, amounting to a big wager that the vaccines will eventually prove to be safe and effective.

China’s rush has bewildered global experts. Many of the injections appear to be taking place outside the typical drug approval process. The vaccine candidates are in Phase 3 trials, or the late stages of testing, which are mostly being conducted outside China. The people in those trials are closely tracked and monitored. It is not clear that China is taking those steps for everyone who is getting the shots within the country.

The wide use of vaccines also raises issues of consent, especially for employees of Chinese vaccine makers and state-owned companies who might feel pressure to roll up their sleeves. The companies have asked people taking the vaccines to sign a nondisclosure agreement preventing them from talking about it to the news media.

“My worry for the employees of the companies is it may be difficult for them to refuse,” said Dr. Kim Mulholland, a pediatrician at the Murdoch Children’s Research Institute in Melbourne, Australia, who has been involved in the oversight of many vaccine trials, including those for a Covid-19 vaccine.

While China is racing the United States and other countries to develop a vaccine, its rivals are moving more cautiously. American companies have pledged to thoroughly vet a vaccine before wide use, despite pressure from President Trump to go faster. In Russia, the first country to approve a vaccine even before trials were completed, the authorities have yet to administer it to a large population, according to health officials and experts.

It is not clear how many people in China have received coronavirus vaccines. Sinopharm, a Chinese state-owned company with a vaccine candidate in late-stage trials, has said hundreds of thousands of people have received its shots. Sinovac, a Beijing-based company, said more than 10,000 people in Beijing had been injected with its vaccine. Separately, it said nearly all its employees — around 3,000 in total — and their families had taken it.

Hong Kong-based Phoenix Television said this month that its Chinese journalists had been given the Sinopharm vaccine.

Tao Lina, a vaccine expert in Shanghai, said part of the government’s motivation was to “test” the public’s willingness to take a vaccine, laying the groundwork for wider acceptance.

“I think this is our country feeling us out,” said Mr. Tao, a former immunologist at the Shanghai Center for Disease Control and Prevention. “That is to say, even without an epidemic, everyone should consider the possibility of a resurgence and weigh whether they want to get a shot or not.”

The vaccine candidates in Phase 3 trials have been previously tested on smaller groups of people. Phase 3 involves administering a candidate and a placebo to hundreds more, to see whether they are safe to take and effective in stopping the coronavirus. Roughly 100,000 people are involved in those trials, based on Chinese company disclosures. Virtually all of them are in other countries, however, because the coronavirus has been largely tamed in China.

Still, the Chinese government had already approved three vaccines for emergency use on others at home. In July, it said it would prioritize medical workers, epidemic prevention personnel, border inspection officials and people who “ensure basic city operations” to receive vaccines.

Now, it appears that those groups could be expanding.

This month, the government of Shaoyang, a city in Zhejiang Province, asked local officials to identify more people who could qualify as “emergency users.” People in schools, kindergartens and nursing homes were recommended for inclusion, as well as travelers heading to “medium- to high-risk areas.”

Other government notices have asked local officials to identify people as candidates for getting vaccinations, though it was not always clear whether they would be inoculated before or after vaccines had cleared Phase 3 trials.

Tough containment efforts appear to have tamed the virus in most parts of China. Still, outbreaks in Beijing and the far west in recent months have spooked the country’s leaders, who worry that lockdowns could disrupt the economic recovery. Chinese public health experts are also concerned that the arrival of winter and the need to keep people indoors might usher in another outbreak.

On Friday, Zheng Zhongwei, an official with China’s National Health Commission, said the government had “gained the understanding and support” of the World Health Organization after China’s cabinet approved the emergency use program. A spokesperson for the W.H.O. said China had issued a “domestic emergency use authorization,” which are issued at the discretion of countries and are not subject to W.H.O. approval.

A senior Chinese official said this month that a vaccine could be made available to the public as early as November. That same day, a spokeswoman for the United Arab Emirates’ Foreign Ministry said on Twitter that the government had authorized the Sinopharm vaccine to be given to its frontline workers after successful Phase 3 trials in the Emirates.

Raina MacIntyre, who heads the biosecurity program at the Kirby Institute of the University of New South Wales in Sydney, Australia, said she would not recommend the emergency use of vaccines before the conclusion of Phase 3 trials. AstraZeneca, the British-Swedish company, halted late-stage testing in the United States on a vaccine candidate this month after one volunteer fell seriously ill for unknown reasons.

Flawed vaccines can cause significant health problems. In 2017, children who were injected with Sanofi’s dengue vaccine became sicker. Children vaccinated against respiratory syncytial virus, or R.S.V., in the 1960s also suffered side effects, resulting in trials being scrapped.

Broad inoculation campaigns also increase the risk of getting multiple vaccines, which could have adverse effects on a person’s immune response.

“It may be three to six months before we get Phase 3 trial results — it’s not that long to wait,” Dr. MacIntyre said. “You are potentially muddying the waters for the time when we do have Phase 3 trial data for the best possible vaccine.”

Still, China may not want to wait.

In an interview with China Central Television, the state broadcaster, Mr. Zheng, the health official, said that when cold weather arrived, the government might consider expanding the scope of who qualified for emergency use, adding people who work in markets, transportation and the service industry.

“The goal is to first establish an immune barrier among special populations, so that the operations of the entire cities will have a stable guarantee,” Mr. Zheng said.

The vaccine makers and local governments stress that participation is voluntary, and many people who take the vaccines pay a considerable amount to do so. According to government notices, the vaccines would cost about $148, putting them out of reach for many in a country where 600 million people make that much in a month.

It is not clear whether recipients have been fully warned about the risks of taking an unapproved vaccine.

Dr. Mulholland, of the Murdoch institute, said he would give an experimental coronavirus vaccine only to health care workers, especially in places like Brazil, which has one of the world’s highest case counts, and continue monitoring them. “They can be educated on the potential risks,” he said.

Jerome Kim, head of the International Vaccine Institute, said he would like to know whether the Chinese authorities were following up on the vaccine recipients. He worries that people might engage in risky behavior if they believe they are protected by a vaccine of unknown efficacy.

“That has all sorts of negative consequences,” Dr. Kim said. “They could be infected and not know it, or they could be spreading the infection because they are relatively asymptomatic if the vaccine partially works.”

That possibility seems not to have fazed many in China.

On a recent Tuesday, Chen Deming, a former commerce minister, boasted to a trade and investment forum in Beijing that he did not need to wear a mask because he had taken a vaccine in Phase 3 trials. “Everybody, please relax,” he said, drawing laughter and applause from the audience.

Later, in an interview on the sidelines of the event, Mr. Chen, who turns 71 this year, said that his vaccine was developed by Sinopharm and that he had developed antibodies to protect against the coronavirus. He said a third of the Commerce Ministry’s staff had joined him in applying to receive the inoculation.

“Because I go abroad sometimes, I applied to take it,” Mr. Chen told a New York Times reporter. Later, he added: “Do you want a shot, too?”