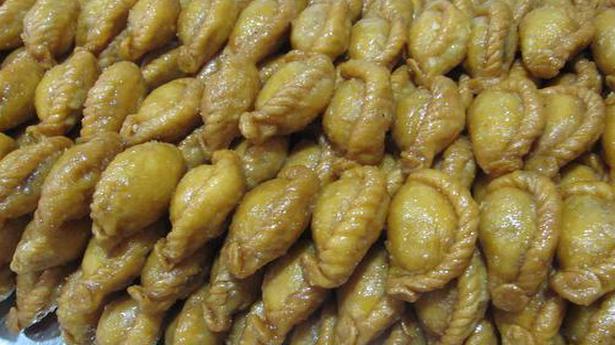 Be sure to sample these unique offerings from the temple city’s Bombay Sweets, that has grown from a small tuck shop to an e-commerce savvy business

BG Subramani Sharma, managing director of Bombay Sweets, smiles when he answers a question on when he entered the business in Thanjavur. “I started assisting my father Guru Dayal Sharma when I was in Class XI, mainly with measuring out the ingredients and learning how to knead the dough for samosa. I was nicknamed maida maavu by my classmates because I would come to school straight from the kitchen with flour on my hands,” he says.

There is a hum of activity at this 10,000 square-feet industrial kitchen complex in Thanjavur, even though lockdown restrictions have mandated a reduced staff strength. Teams of men and women are preparing a host of snacks and savouries that will be displayed and sold at the store’s 14 branches in Thanjavur and Pattukottai.

Clearly, it’s been a long journey, from a small tuck shop opposite Thanjavur railway station in 1949 to an e-commerce savvy business today.

“My father was a traditional sweet maker in Mathura, Uttar Pradesh, who migrated down South in the 1940s, and after working for a short while in Madras, settled down in Thanjavur. He was a master chef who believed in using the best ingredients,” says Sharma. “He loved every step of cooking — he would begin his day listening to Surdas bhajans while slicing cashew nuts. He remained as enthused about his work in his later years, as when he was starting out.”

Since 1949, Bombay Sweets (named so by Sharma Senior because the city symbolised sophistication and novelty to him, even though he had never actually been there), is a favourite snack food destination for both local residents and tourists in Thanjavur. While the original menu has expanded from North Indian snacks to include Southern Indian tiffin items and fast food, its best-sellers are the sweets Chandrakala and Suryakala, a Guru Dayal innovation that combines the best of north and south festive cuisines.

These are little fried pastry parcels filled with khoya or mawa (whole dried milk) mixed with nuts and seasoned delicately with saffron and cardamom powder, then dipped in a light sugar syrup.

“For this recipe, my father was inspired by the gujiya, a dry fried pastry that is commonly prepared for festivals like Holi in the North. Chandrakala and suryakala, both of which have the same filling, get a southern Indian twist with a brief dip in hot sugar syrup at the very end,” says Subramani.

Around 250 kilos of Chandrarkala are made per day during lockdown.

Their name derives from their shape — Chandrakala looks like a crescent moon, while the Suryakala is round, like the sun. Due to the lockdown, Suryakala is made only during the weekends, while three varieties of Chandrakala – regular, ghee and almond filling — are churned out from Monday to Friday.

Where possible, machines like paddle mixers and dough extruders help to streamline the production process in Bombay Sweets. For the Chandrakala preparation, a heavy-duty mixer kneads maida and water into a silky dough that is then passed through a mechanical cutter which forms equal sized portions for rolling out.

Workers then sit in assembly-line fashion to break down the task of rolling out, filling, and then delicately folding the edges of the pastry discs by hand.

Another team of cooks supervising huge oil-filled pans is on hand to fry the Chandrakala. The flame is kept on medium heat, to ensure that both the casing and filling are well-cooked. The parcels are turned constantly with slotted spoons in the hot oil, and once drained, the fried pastry is passed on to the next team overseeing the sugar syrup.

The Chandrakala pockets are removed as soon as the fluted edges look glazed. “If this step gets delayed, you can end up with soggy Chandrakala, so the cooks have to be very careful,” says Subramani Sharma.

We get to sample a Chandrakala fresh from the kitchen. The crisp pastry and soft filling get a low sugar kick from the syrup, making it an ideal teatime snack.

With footfalls at restaurants reducing due to the lockdown, Bombay Sweets has started offering pre-packaged snack combinations for both online and offline sales. “As the festive season is set to begin, and due to the improvement in delivery logistics, we have decided to reach out to Indian customers through our website. We also get many orders from Thanjavur residents living abroad,” says Subramani Sharma.

The demand for Chandrakala and Suryakala has grown with the new mini versions that are ideal for gifting.

Subramani Sharma has catalogued all the recipes that are being used by Bombay Sweets, and hopes the family’s forthcoming generations will develop the patriarch Guru Dayal Sharma’s vision further.

“Even at the age of 52, I miss my father, who passed away in 1991. His career in Thanjavur alone lasted 50 years. Though the branches have grown since his demise, at the end of the day, Bombay Sweets is the tree that he planted. And Chandrakala and Suryakala are fine examples of his creativity,” he says.