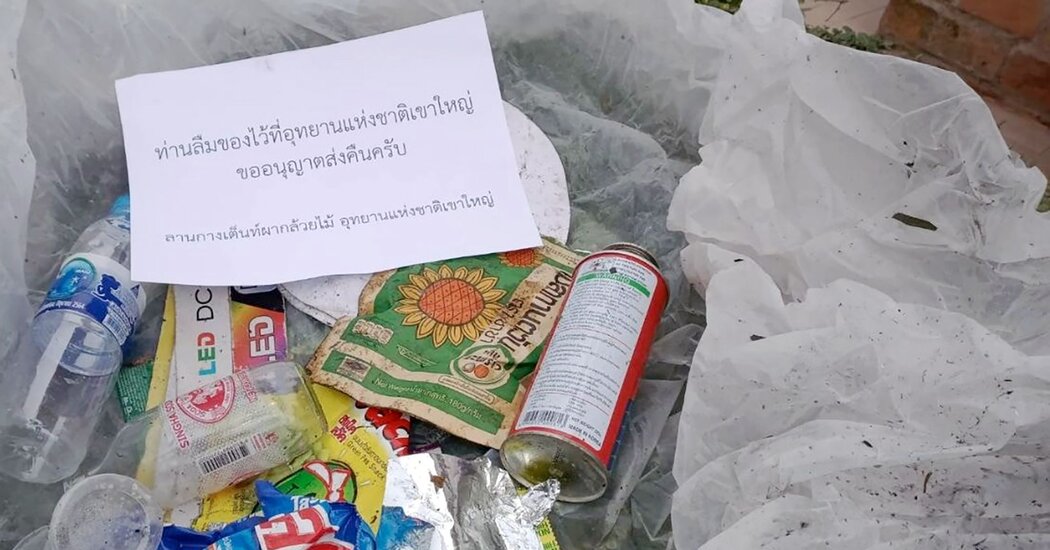 HONG KONG — Officials in Thailand had an unorthodox approach to deal with visitors who left a tent filled with litter in a national park: mail the trash to the offenders.

The country’s environment minister said that he wanted to call attention to a garbage problem at Khao Yai National Park that endangers animals that could eat the litter while foraging for food. He vowed in a Facebook post last week to track down anyone responsible for littering in the park.

“I will pick up every single piece of your trash, pack them well in a box and mail it to your home as a souvenir,” the minister, Varawut Silpa-archa, said in the post. He also posted photos of a delivery box containing a transparent trash bag filled with used plastic water bottles, soda cans, torn packs of chips and sunflower seeds.

Thai officials said they had, indeed, mailed the box of trash to campers who had left the waste in a tent they abandoned. The special package came with a pointed message for the group, who have been placed on a blacklist barring them from returning to the park for overnight visits.

“You have forgotten some of your belongings at the Khao Yai National Park,” read a note to the campers, who have not been publicly identified, that was placed on the clear trash bag. “Please let us return these to you.”

The move by the Thai authorities comes amid growing global efforts to reduce the environmental impact of trash and curb the use of plastics. Activists are increasingly sounding the alarm as garbage continues to clog oceans, showing up in the stomachs of dead whales in countries like Indonesia and Spain.

The Great Pacific Garbage Patch, for example, covers an estimated surface area of 617,764 square miles, which is more than twice the size of Texas. Scientists have studied the five known heaps: one in the Indian Ocean, two in the Atlantic Ocean and two in the Pacific.

Several cities have banned the use of plastic straws and single-use plastic bags. (Thailand also banned the bags this year. ) But efforts to eliminate plastic bags have suffered setbacks during the coronavirus pandemic, with increased food deliveries at home.

In recent years, trash has also become a political issue, with some countries in Asia and Africa refusing to continue accepting trash shipped from countries in the West.

In 2017, China imposed restrictions on the importation of some scrap metals, paper and plastic. Other nations like Malaysia and Kenya followed suit, refusing to be offshore landfills for the developed world by banning imports of waste and discarded clothing.

While anti-littering campaigns have been staples in many cities for decades, Thailand’s approach, targeting individuals with a shaming reminder of their misdeed, is unusual.

In the case of the abandoned tent, matching the garbage to the campers involved some detective work. In a memo posted on Facebook, a government agency responsible for the park said last week that it began investigating a complaint about the campers that was posted last Monday in a public camping group on the platform.

Following the tip, park officials tracked down the campers after cross-referencing equipment rental forms and a prescription bottle found in the tent.

The message that officials intended to send did not end with mailing the trash to the offenders. Citing two incidents of littering and drunken behavior by different campers, Mr. Varawut, the environment minister, said in his post that campers who violated park rules would be reported to the police.

Littering in a Thai national park can lead to a maximum of five years in prison and a fine of up to $16,000.

“You may take only two things from our parks,” Mr. Varawut wrote on Facebook, addressing would-be campers. “Those are memories and photos. Leave only footprints behind.”