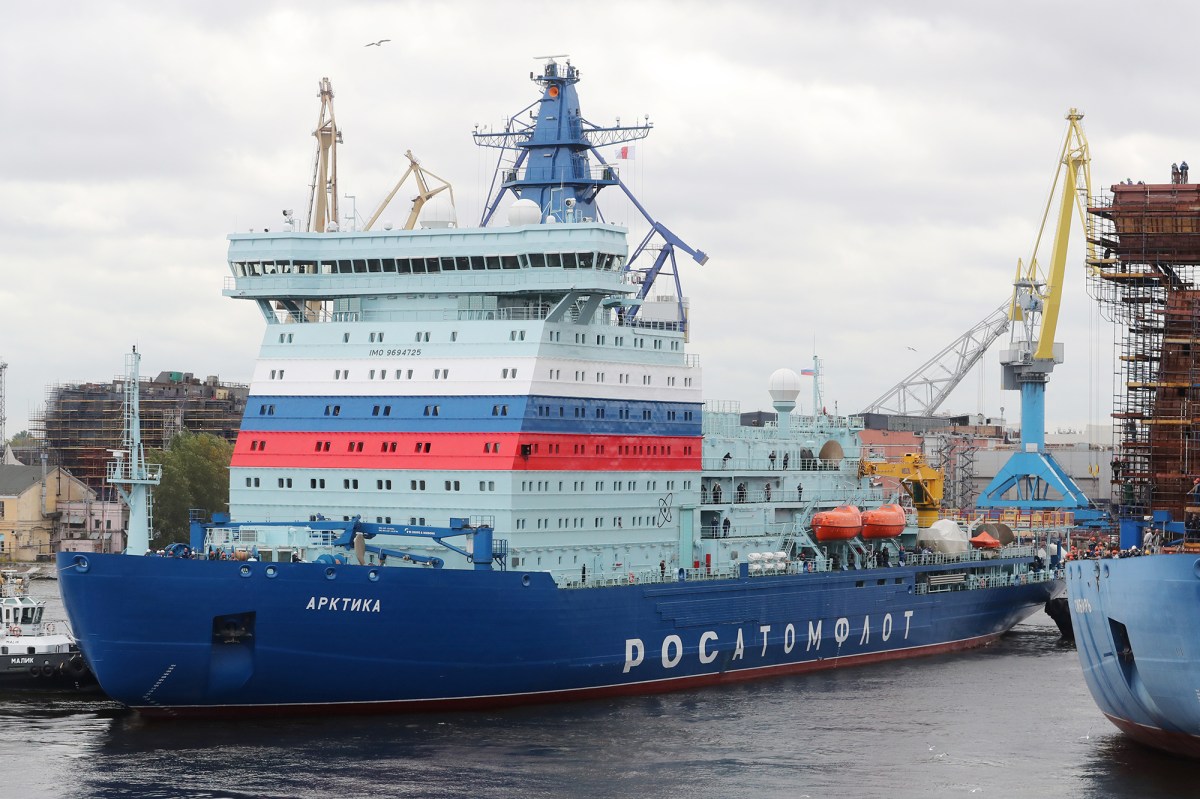 Russia’s new nuclear-powered icebreaker, the Arktika, took its maiden voyage out of St. Petersburg on Tuesday for a two-week journey to the northern port of Murmansk.

The move comes as leaders of the U.S., Russia and China have turned their focus to Arctic Ocean, its shipping lanes and its natural resources. It may include as much as 13 percent of the world’s undiscovered oil reserves and 30 percent of its natural gas, in addition to fisheries and other resources.

Russia is billing the new vessel as the largest and most powerful of its type in the world as the country vies for control of the Arctic. It is the flagship of a new ice-breaking fleet designed to enhance Russian shipping capabilities there.

The Arktika is 570 feet long and capable of breaking through ice as thick as 9 feet, according to Rosatom, Russia’s state-owned atomic energy corporation.

Comparatively, three new U.S. Coast Guard icebreakers under development by VT Halter Marine in Mississippi will boast 45,200-horsepower, diesel-electric engines, stretch to 460 feet and smash through ice as thick as 8 feet. The Coast Guard’s new Polar Security Cutters are expected in 2024, 2025 and 2027.

President Trump sent a memo over the summer to executive branch leaders asking them to report back with plans to expand the U.S. icebreaker fleet. Until the new vessels are completed, the government owns two – the USCG Polar Star, designated a heavy icebreaker capable of performing in the Arctic and Antarctic, and the USCG Healy, a medium-class icebreaker. Other U.S. icebreakers are privately owned.

Vice Adm. Scott Buschman, the Coast Guard’s deputy commandant for operations, told Fox News in August that the U.S. needs to increase its efforts in the region to keep pace with rival nations.

Russia has dozens of icebreakers, in addition to the Arktika.

China, which also aims to stake a claim in the Arctic, is reportedly developing its own version of a nuclear-powered icebreaker and maintains a fleet of medium icebreakers. Other players in the region include Canada and Norway.

The Arktika’s name comes from an earlier Russian icebreaker that became the first surface ship to arrive at the North Pole in the 1970s, according to the Barents Observer. That vessel remained in service until 2008.

At the launch ceremony for the icebreaker on Tuesday, St. Petersburg Gov. Georgy Poltavchenko declared: “The Arctic is ours, and we’ve proved it,” according to CBS News.

But on Tuesday, the State Department announced that U.S. Coordinator for the Arctic Region James DeHart would visit allied countries in the region aimed at advancing “U.S. interests in the areas of security, economic growth environmental stewardship, energy, and support for indigenous communities.”

“DeHart’s discussions will focus on strengthening transparency, good governance, and ensuring a rules-based order in the region through Arctic Council engagement and shared efforts toward a secure, stable, and prosperous Arctic, free from conflict,” the State Department said.