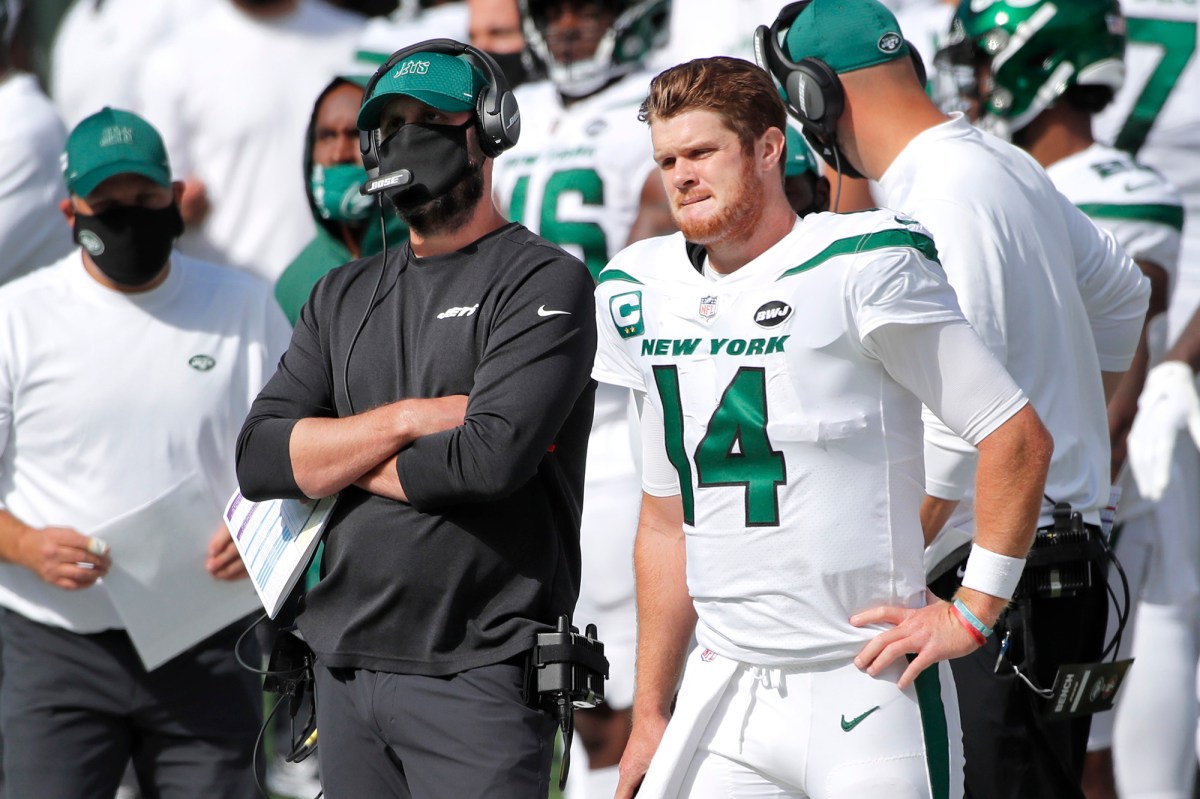 For Sam Darnold, too.

At the very least, it’s nearing closing time for the Jets embattled and universally unpopular head coach, who with every game he coaches is showing he’s simply not up to this job and was the wrong hire in the first place.

The sample size for Gase is growing, and the results are not getting better. They’re getting worse. That’s damning. And it’s always a prelude to a firing.

It’s very possible that Gase’s last stand comes as soon as Thursday. That’s when the 0-3 Jets will play the 0-3 Broncos at MetLife Stadium, in a game between arguably the two worst teams in the league.

Make no mistake: This will be a pressure-point game.

Perhaps the only saving grace for Gase is the fact that, because of COVID-19 restrictions, no fans are allowed at MetLife Stadium, so that spares ownership the embarrassment of a half-full stadium of fed-up fans expressing their ire in front of a “Thursday Night Football’’ audience.

The loser of that game will inch one step closer to the first-overall pick in the 2021 NFL Draft, which means the option to select Clemson star quarterback Trevor Lawrence to change the course of the franchise.

Sunday against the Colts in Indianapolis was never going to be a true litmus test for Gase and the Jets, who entered the day as the heaviest underdogs on the Week 3 NFL schedule (11 points) and were never going to win this game.

But simply being competitive for 60 minutes — something the Jets failed to do in their first two losses this season — was a baby step team owner Christopher Johnson and general manager Joe Douglas were looking for out of Sunday’s game.

That baby step was never taken. The baby tripped and fell.

The 36-7 shellacking the Jets took from the Colts, who closed the game by scoring 29 unanswered points, would not be characterized as being competitive on the part of the Jets, who look like a dead team with no hope only three weeks into the season.

The Jets have lost their three games by a total of 94-37 and have been outscored, 59-13, in the first half of those losses.

Along the way, Darnold simply has not risen above the ashes to make those around him better — even though, in fairness, many of those around him are backups because of the rash of injuries the team has suffered. He has not performed like a third-overall draft pick needs to perform.

Subsequently, when Gase is fired, it’s highly possible that Darnold becomes collateral damage — even if he hasn’t been dealt the best hand since he was drafted with constant change in coaches, offensive systems and not enough skill-position players around him.

You know another quarterback who wasn’t dealt a very good hand by the Jets?

Say what you want about Sanchez, but he accomplished a lot more in his first three seasons than Darnold has to date, and in the end, it was Rex Ryan’s foolish mismanagement of him that sabotaged Sanchez’s Jets career.

Darnold, remember, was not drafted by Douglas.

So, if Douglas has the first-overall pick come springtime, how can he pass up Lawrence?

As much as we all might like Sam, want him to succeed and agree he’s had a disjointed three seasons with the Jets, what he’s shown in his two-plus seasons has not been enough. Conversely, he looks like he’s regressed.

That’s on Darnold. It, too, is on Gase, who was hired because he was supposed to be a developer of quarterbacks.

Sunday’s performance was inexcusable. Darnold lost the game for the Jets. He threw three interceptions, two of which were returned for touchdowns, the first of which came on the Jets’ first possession.

“I’m not playing consistent enough to play well in this league,’’ Darnold said in a statement that was equal parts honest, damning and alarming. “[I’ve] got to be better.’’

So does Gase. And his time is running out to do so.

Yes, the Jets have been decimated with injuries this season. If you want to blame the Jets problems on the injuries, you go ahead. But the problem is bigger than that. The Jets have played three games and been noncompetitive in all three.

That’s on the head coach.

“You don’t want to go out there and get your ass kicked,’’ Gase said. “We let that one get so far away from us. We have to figure out a way to clean up the things that aren’t going right for us.’’

Gase was asked about his tenuous job security, which is growing into a larger story by the minute.

“I’m going to do what I always do — come to work tomorrow,’’ he said. “I’ve got to focus on getting our guys right.’’