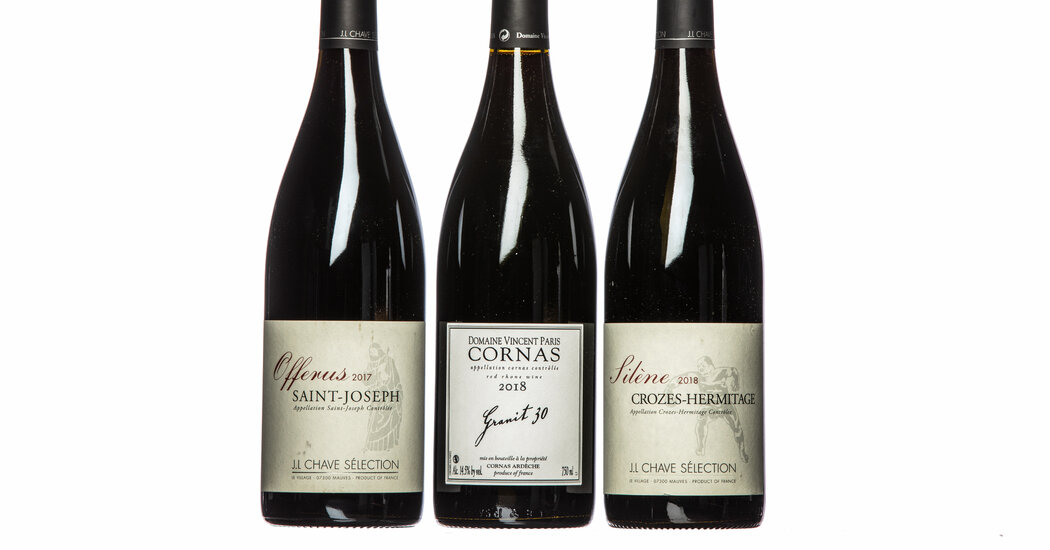 This month we’re going to try something a little different.

Ordinarily, I suggest three bottles of the same type of wine. Instead, I want to compare three wines that are closely related but come from different appellations within a larger region, the Northern Rhône Valley of France.

Each is made with the syrah grape. But what if anything distinguishes one from the others? That’s what we are going to examine.

The French appellation system suggests that each place will have its own distinctive characteristics. It’s one thing, say, to compare a Chambolle-Musigny from Burgundy with a Chinon from the Loire Valley. One is made from pinot noir, the other with cabernet franc. You would expect that they would differ for that reason alone.

But if wines are made with the same grape, other factors come into play. In the case of the Northern Rhône, the French authorities concluded long ago that the wines made in St.-Joseph, Crozes-Hermitage and Cornas were all sufficiently distinctive to warrant separate appellations.

What would be the basis for the differences? Soils, drainage, microclimates, elevations, angles of inclination toward the sun, viticulture and, yes, the human element, all play a role. Terroir, in short.

Of course, we would be naïve not to acknowledge other factors, like economics and politics, that influence how appellations are shaped.

When the St.-Joseph appellation was founded in 1956, for example, it was intended to convey the qualities of wine grown on steep granite hillsides clustered near six villages. Eventually, though, because of economic and political pressure, the appellation was extended to include flat, fertile, easy-to-farm areas that yield inferior wines and muddy the meaning of place.

Still, St.-Josephs made by good producers, who respect the spirit of the appellation, ought to give good ideas of the character of a place. Here are the three Northern Rhônes I suggest:

You will note that two of the wines come from the same producer, J.L. Chave Sélection, the négociant arm of Jean-Louis Chave, one of the great producers of the Northern Rhône. I think these are among the best and most accessible examples of both St.-Joseph and Crozes-Hermitage. If Chave offered a Cornas, I might have chosen that bottle, too. Vincent Paris is an excellent choice in his own right.

If you can’t find these bottles, please consult Wine School columns on St.-Joseph and Crozes-Hermitage for other options.

We have not covered Cornas previously, so if you cannot find the Granit 30, please consider bottles from Franck Balthazar, Alain Voge, Guillaume Gilles, Mickaël Bourg, Domaine Lionnet and Jean-Baptiste Souillard. I’m not suggesting legendary producers like Thierry Allemand and Auguste Clape, but if you have a spare bottle, by all means go ahead and drink it.

I like pretty much anything with Northern Rhône reds, but you can’t go wrong with a roast chicken, various beef dishes and savory stews.

A cautionary note: You may not find compelling differences among the wines. This is simply the beginning of an exploration, not a scientific experiment intended to reach definitive conclusions.

If you do find differences, they may tell us little about appellations. They may be the usual variables that would be apparent in wines made from different producers, or different vintages in the case of the St.-Joseph.