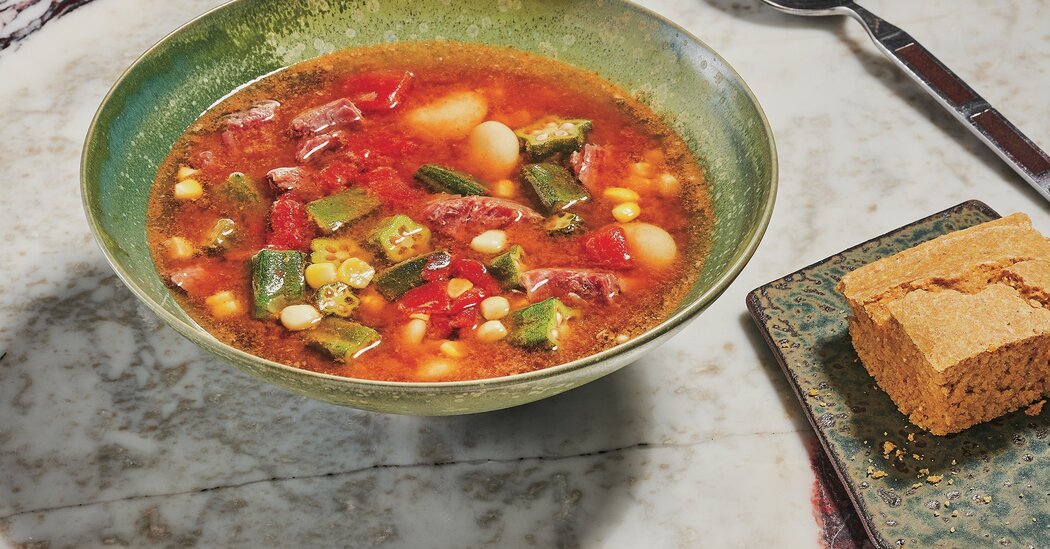 The West African influence continues with rice, which Ganaway insisted the Gullah Geechee “always, always, always” eat with okra soup. “It’s important to note that the enslaved people from West Africa were specifically brought to the Lowcountry because of their knowledge of how to grow rice.” The rice grains themselves traveled the Middle Passage along with the kidnapped West Africans. Called nkru-ma in Ghanaian Twi, the soup’s eponymous okra, too, came from Africa on those ships.

The key to okra soup is its consistency — it shouldn’t be too thin — and purists discourage the use of added starch to thicken the soup. As Ganaway advised, “The okra will naturally thicken the broth, and the fresher it is, the better it’ll do the job.” And while neither Ganaway nor I have an aversion to okra’s mucilaginous quality (in fact, we both love it), it doesn’t come much into play in this soup, because the vegetable is cooked for only about 10 minutes, leaving it tender but not slimy, while the pod’s caviar-like seeds add both protein and a textural pop with every bite.

“For okra soup, the main thing is you have okra and tomatoes — otherwise do what you want,” Ganaway told me. But unlike many recipes, this one uses the entire tomato. As a cook, I’ve always been flummoxed to see people discarding tomato seeds and their surrounding jelly and call it fine cooking when anyone who has taken the time to carefully taste the fruit knows that they’re actually the most flavorful parts — up to six times as rich in the compounds that contribute to umami as other parts of the fruit. Throwing the flavor away for some arbitrary aesthetic reason strikes me as absurd, and in this soup the tomato’s seeds are essential.

The tomato arrived in the American South by way of Mexico — it was native to Peru — where it was domesticated sometime in the 17th century, and it became fundamental to Lowcountry cooking. And the butter beans and corn that Ganaway stirs into the soup right at the end are also not native to the region; they came from Peru and Mexico and traveled north, where Native Americans introduced the ingredients to Gullah Geechee cooks. I’ve spent my cooking career obsessed with sourcing ingredients, but Ganaway inspired me to look much further back, to not stop at the farm or the market but to trace the actual origin of each ingredient. At least four continents, five spiritual traditions and three races were represented in this dish.

At home, when the soup was finished, I looked at the constellation of vegetables, beans and shredded meat in my bowl. Between spoonfuls, the okra seeds popped in my mouth, and I ate rice to soothe the burn of hot sauce at the back of my throat. “We can’t have the conversation about what American food is without talking about the little communities that were built up along the coast of our country because of the slave trade,” Ganaway told me. By necessity, Gullah Geechee cooking refers to our nation’s history and acknowledges even the ugliest parts — the genocide, the enslavement, the colonization — and still manages to nourish. While we might think of burgers and apple pie as our national culinary emblems, this okra soup makes me wonder if it isn’t worth reconsidering what makes a dish uniquely American.

Coronavirus: How does COVID-19 spread indoors and ways to prevent it? | The Times of India