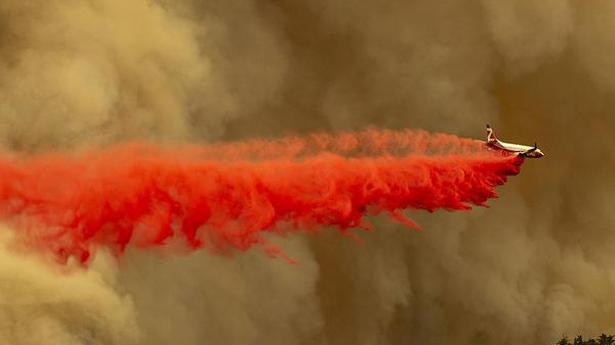 Firefighters were battling unprecedented wildfires up and down the U.S. West Coast on Friday that killed 15 people and forced more than half a million others to flee their homes, with officials warning of more deaths to come in the days ahead.

The true scale of destruction was impossible to count across wide stretches of California, Oregon and Washington cut off from the world by an apocalyptic wall of flames, fuelled by record heatwaves and intense, dry winds.

The August Complex Fire became the biggest recorded blaze in Californian history on Thursday, after multiple fires in the state’s northwest combined under high temperatures and winds to rip through 7,46,000 acres of dry vegetation.

More than 2.6 million acres have been burned across the whole state so far, a Cal Fire spokesman said on Thursday evening.

Half a million people have been evacuated in neighboring Oregon, where the government said firefighters were “prioritising life (and) safety as they battle a record 9,00,000 acres of wildfires.”

Governor Kate Brown said that the amount of land incinerated by fires in just the last 72 hours was twice the state’s annual average, and that at least five towns had been “substantially destroyed.”

“We have never seen this amount of uncontained fire across our state,” she told a press conference.

Huge wildfires are becoming more common, with the World Meteorological Organization saying the five years to 2019 was “unprecedented” for fires, especially in Europe and North America.

Local Oregon officials confirmed two deaths in the Santiam Canyon region south of Portland, and a third in the Ashland area, near the California border.

Police went door to door to make sure that residents were evacuating the city of Molalla.